This is a slot based on the ancient epic poem that tells the story of a hero who came to the rescue of a Danish king after attacks from a dastardly monster known as Grendel. The author of the poem is anonymous, and this slot from Quickfire threatens the same fate, despite a couple of nifty features. We’ve got a tasty free play demo version below for your amusement.

Playing for real money is a possibility over at Kaboo Casino, the number one casino for July 2021. 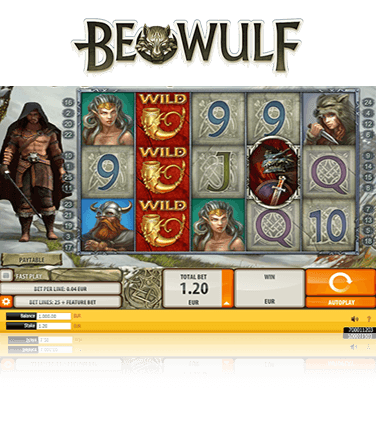 Real Money Casinos Where You Can Play Beowulf

Quickfire has produced some decent slots, but this one sends shockwaves through absolutely nothing; it measures lower on the Richter scale than a pig’s ear falling into a Bangladesh-sized vat of honey. And a pig’s ear is exactly what the developer made of this unpalatable calamity. In addition, fans of the movie, or indeed, the epic Old English poem, will note that it tastes no sweeter than the sourest of honey.

The graphics are hardly worth criticising, but on the other hand, there’s nothing out of the ordinary to note here. Symbols include a dragon, a princess, a lady in wolf’s clothing, a Viking warrior and a king, which is the highest paying regular symbol. Grendel is the scatter symbol which distributes a random number of Wild symbols and determines the number of respins. Meanwhile, the regular wild, represented by a trumpet, substitutes for all symbols except Free Spin scatters, plus sword and dragon bonus symbols. The dragon scatter awards up to 20x your bet when five appear, while three or more scatter symbols activate free spins. The free spins feature continues until the Free Spin Dragon Fight feature has ended. In this feature, the winner of a fight between Beowulf and the Dragon will determine how many free spins you get. If the hero wins, you get three free spins to relish.

Conclusion – Not Worth Writing Home About

Beowulf isn’t the greatest game on the virtual shelves, but it’s hardly the worst. With 25 paylines and high maximum wagers you can win a lot of money in one fell swoop, so if you are a high-rolling risk taker you can get your thrills and spills. The respins, multipliers and free spins also give the game a bit of variation in terms of gameplay. OK, we’re beginning to convince ourselves this game isn’t so bad after all – it just lacks the punch and polish of certain rival titles with similar themes. If you tried the game out, please let us know your thoughts below!