Treasure Island – Comes with a Haul of Bonus Features

The pirate genre has never really been underrepresented in the online slots market. In 2003, when Johnny Depp and Walt Disney brought the pirate back in to popularity, the online casino business was just getting going. There has been no shortage of games set across the seven seas, but this one by developer Quickspin might be the best one yet. You can try this slot for free with our version of the game below.

Play for real money at BetVictor, which is our top choice for playing this slot in January 2021. 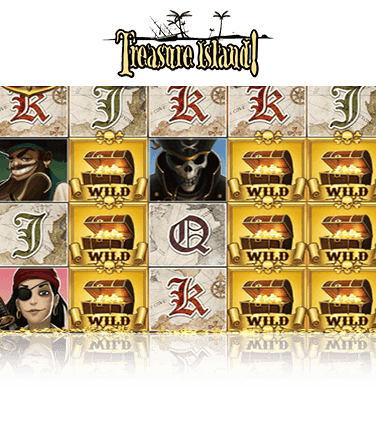 Treasure Island is played over five reels with four visible rows. The core gameplay is as you’d expect, with the extra bells and whistles in the form of cannon animations and general pirate thievery shenanigans. Landing enough TNT wilds will cause a ship out at sea to launch an attack on the reels, potentially revealing more wilds which in turn lead to bigger wins.

There’s also not one but two bonus features in this game. Landing three bonus compass symbols will give you the option to choose which bonus game will be activated. The Free Spins round acts much like any other in this business. You know the drill by now. Choose from a handful of boosters and away you go. Super Wilds can generate longer stacks and lead to bigger wins, whilst any locked barrels that appear can potentially bring the aforementioned pirate attack. The other mode is Treasure Hunt. This one is a simple click and reveal mini-game where players can find instant wins or treasure chests containing even larger rewards. From a gameplay perspective, you can’t ask for much more than this. It’s packed with bonus features and the core gameplay is rewarding and consistently exciting.

Quickspin’s Treasure Island offers a rock-solid core gameplay experience that looks the part, but it’s the game’s bonus features that provide the real treasure. In this industry, offering one decent bonus round or feature appears beyond some developers. Here, you have two different and equally satisfying mini-games to supplement the tight base game. Combine that with a professional soundtrack and a slick look and you’ve got yourselves a winner, mateys! If you’ve played this slot and would like to share your opinion, leave a message in the comments section below.