Rambo – All The Gory Details

Sylvester Stallone returns for a wild ride featuring four progressive jackpots! This action-packed video slot from iSoftBet features clips of Sly in the thick of the action, an immersive soundtrack and lots of grenades. With a ridiculous 720 ways to win, you’d be silly not to take a spin, try our free demo below!

Not enough action? Raise the stakes and play for real money here at BGO, the top casino for September 2021. 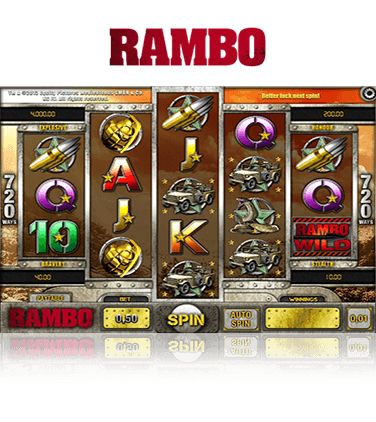 Real Money Casinos Where You Can Play Rambo

The Rambo slot game features an unusual structure, with five reels and between three and five rows, this game is unlike any we’ve seen before. The strange structure, however, allows for an enormous 720 ways to win, so who are we to judge? The paytable is led by an Army Issue Jeep, worth 500 coins for five matches, followed by a snake, a knife and some bullets. Following on we have our playing card symbols including Ace, King, Queen, Jack, Ten and Nine in bright colours, each with a gold star. The Wild symbol replaces anything but scatter and progressive symbols and does not count during free spins with any extended symbols. The scatter (Stallone’s face) does not pay in the traditional sense but spin three or more and you’ll be rolling in free spins. Every instance of this will get you five to fifteen free spins and a 5x to 15x multiplier. At the beginning of free spins, a symbol will be chosen at random and can extend to fill a whole reel for a higher payout probability. This game offers four progressive jackpots aptly named Stealth, Bravery, Honour and Explosive and are triggered by five or more of the golden grenade progressive symbols appearing and exploding. Payouts are celebrated with clips of Stallone in action from the films so prepare for the occasional burst of machine gun fire!

Conclusion –A Tonne of Action

This Rambo themed slot is definitely one for the lads and ladies that love a bit of Stallone. Arguably his most famous film has inspired a stimulating and immersive video slot In a style that we aren’t all that familiar with, but definitely enjoy playing. With an unheard of 720 ways to win and a fantastic RTP of 97.6% iSoftBet are on to a winner and you can be too! Has this game got your blood pumping? Let us know in the comments section below.