Viking Runecraft – Ragnarok-ed Our Socks Off

Join the fight for humanity’s future and glory in this mythological war-themed video slot from Play’n GO. Level up and be rewarded by the strongest of the Norse gods: Odin, Thor, Freya, and Heimdall, who will use their divine powers to shower you with riches. If you string together enough stones, you will have one-last stand in the Ragnarok bonus game which can lead to massive riches, and got this slot nominated for the prestigious EGR Game of the Year award. Play a free demo below.

If you enjoyed this innovative level-based slot, you can play for real money at BetVictor, the top casino for March 2021. 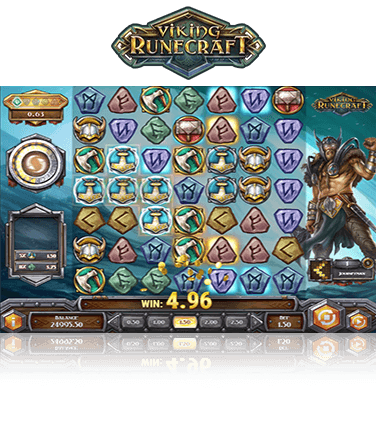 Viking Runecraft is an innovative seven by seven, level-based grid slot that offers a multitude of exciting features that fill nicely with the games Norse theme. In this Play’n GO slot wins are achieved when five or more matching symbols, out of the game’s nine symbols, are touching. Winning symbols are removed, and new ones fall to fill in the gaps. Each subsequent win fills the Charge of Destruction. Twenty winning symbols activates one of four powers, while 40 winning symbols will activate the Ragnarok bonus game. Each of these powers destroys a number of symbols to unlock some big payouts. During the Ragnarok bonus game, the Norse landscape transforms into a fiery hellscape. The stakes are high, and the fate of the world rests on your shoulders, but like all difficult tasks, the rewards that bare are often plentiful. All wins during the Ragnarok feature increases a multiplier up to 15x. If the multiplier meter fills up, you are awarded with a god power, just like in the normal game. The multiplier was essential for some of the biggest payouts we received. The ragnarok feature ends once all powers have been used. In addition to the game’s unique grid design, the game features a level-up system. In order to level-up you need to clear the pattern resting under the god to the right of the slot. Each new level brings with it new gifts. Each god has their own special gift, which are each a form of wild. The Gift of the Gods feature is triggered on non-winning game rounds. The final feature in the game is the Runes of Valhalla. Each winning runestone is gathered. Once the god’s pattern (mentioned above) is cleared, you have one more chance at a bonus with a Wheel of Fortune like mini game. If your spin lands on the wheel, you win a bonus amount indicated on the bonus display.

Viking Runecraft may sound overwhelming at first, but after a few spins, it all becomes clear. We sometimes find these level-based titles needlessly complicated, but Play’n GO’s Game of the Year nomination is a testament to the growing popularity of these games. Unlike in other level-up slots (Cloud Quest), we found levelling up achievable and rewarding. We admire the amount of work that must go into producing such a feature and appreciate that this developer didn’t just throw new clothes onto a scantily clad girl like they have for many other of their slots. The music and sound are as epic as the gameplay and add much to the overall atmosphere. The RTP is 96%, and although we can’t guarantee success, we found wins to be frequent, and quite large. We recommend you take the trip to Valhalla and play this game. Let us know what you thought in the comment section below.