Silent Run – Take the Plunge for Some Great Winnings

Many slots will take you underwater but few will do it during WWII. With brilliant graphics and a gripping soundtrack, this is exactly what this slot from NetEnt does. If you’d like to be the captain of your own submarine, set a course towards our demo version and play online for free!

Willing to play for real money? You don’t need a periscope to locate the game – it’s at Grand Ivy, which has amazing offers for January 2021! 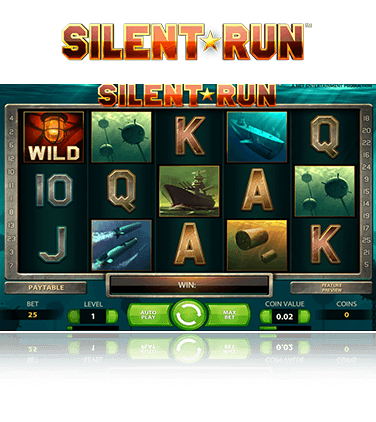 Veer towards the Big Prizes – Here’s Your Navigation

The symbols you see on the reels of Silent Run include submarines, ships, sea bombs and you also have great animations for the features which are unlocked by the special symbols. The submarine is the highest paying symbol and there are two Echo Wild and Echo Bonus symbols which trigger the special features. The Red Sonar on reel 3 unlocks extra Wilds and the Green Sonar on reel 3 will get you a random number of torpedoes (up to five) on the reels. Feel like a true soldier in battle as you target the torpedoes to destroy enemy ships. Each ship brings a different prize and a multiplier – first ship x1 and the last – up to x10, depending on the number of torpedoes. Not too shabby, eh?

The Main Symbols and Payouts

Take the Plunge in Our Video Preview

Explore the Depths of the Sea for Some Big Prizes

Although there are no free spins in Silent Run, you have really big chances to scoop some pretty decent winnings during the torpedo bonus round. If you manage to unlock this feature once, however, it may not be soon that you’ll have this chance again. Visually, the slot represents perfectly the maritime theme with great graphics by NetEnt who have made sure you have all the paraphernalia of a naval battle. They’ve even thrown in some pretty nifty animations with the red sonar pulsing as it unlocks additional wilds. Having 5-6 of these ‘invisible’ Wilds revealed, you could be banking a good several thousand coins in a 50 – 100x bet. Top that with a bit of an eerie soundtrack and you have the complete action-packed game to immerse you in an underwater experience that will keep you playing and exploring, one battle at a time. Have you already taken the plunge with this slot? Let us know how destroying enemy ships felt and how many winnings it brought you by leaving a comment below!

up to £1,500 + 100 Spins on StarburstOur casino suggestion for Silent Run
Overall Rating 9.7/10.0 Play here!
Full T&Cs apply. 18+. New players only. One bonus offer per player. Minimum deposit £20, max bonus bet is £5, bonus spins on selected games only and must be used within 72 hours. Bonus funds must be used within 30 days otherwise any unused bonus shall be removed. Bonus funds are 100% match up to £300 on your 1st deposit, 25% match up to £800 on your 2nd deposit, and 50% match up to £400 on your 3rd deposit. Bonus funds are separate to cash funds and are subject to 35x wagering the total bonus, cash & bonus spins. www.begambleaware.org.
NetEntAll 188 NetEnt slots at a glance
Popular Blog Posts
NextGenAll 111 NextGen slots at a glance
MicrogamingAll 408 Microgaming slots at a glance
Home > Netent > Silent Run