Deal or No Deal International – Your Favourite Game Show

Have you ever wanted to appear on a game show and win the lot? Well now you can live out that fantasy with this gripping slot! PlayTech have brought the excitement of this TV staple direct to your screen – play our free demo now!

Are you prepared to play for real money? Head over to Casino.com, the place to be in January 2021. 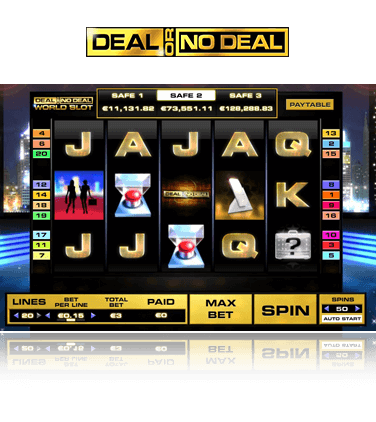 This slot is based on the popular game show of the same name and has been developed by PlayTech. The game’s logo is the Wild symbol which replaces all except Scatter. Gameplay happens on 5 rows, 3 reels, and 20 selectable paylines. Deal or No Deal International features 3 Bonus Rounds that are all triggered by 3 or more occurrences of the Scatter symbol. 3 Progressive Jackpots are available and hidden behind a safe. Your bet amount dictates what jackpot you’re eligible for, with higher initial bets giving access to the biggest jackpot. It should be noted that Jackpot prizes are only available when playing all 20 paylines. The Jackpot Game mimics the TV Show where 26 briefcases are presented, requiring a “Lucky Case” to be chosen and then briefcases eliminated in different stages. The Reel Banker Bonus is the game’s free spins feature, which are of an unlimited number until the Banker symbols appears on reel 3. All wins during free spins are doubled. In the Banker’s Best Offer Bonus, a banker character will offer you 10 different cash amounts, one by one. You can accept an offer to receive that cash prize, or decline to be shown the next offer. Once an offer has been declined, it cannot be re-claimed. If you decline all offers, you will be awarded the last (10th) prize.

Watch a Preview of the Game right here

If you’d rather keep the action close to home, try your hand at Deal or No Deal UK. The same fun and thrilling format of the game will be at your fingertips, with slightly different payout symbols and identical bonuses. 3 Jackpots are up for grabs if you have all 20 paylines selected, but you’ll also be eligible for an alternative top cash amount.

Conclusion – Be Right on the Money with Thrilling Features

Trying to replicate the excitement of one of TV’s most popular game shows might sound like a daunting task, but we think this slot has done it. The amount of bonus rounds, on top of the huge Progressive Jackpots, makes the appearance of Scatter symbols all the more dramatic on the reels. The graphics definitely need improvement, but the soundtrack makes up for this and mimics the TV show really well. Payouts in small amounts are frequent and bonuses occur enough for fans of the original show to be entertained. The standard icons that you see in most slots might feel out of place here, but we believe they fill the space between bonus rounds adequately enough. What do you think? Are you a fan of Deal or No Deal International? Give us the details about your biggest win in the comments below.

Further improving the thoroughness of our article, we’ve decided to include the most asked questions about the Deal or No Deal World slot game. We have collated the most popular queries raised by players. In the following section, we have provided all the answers that you need.

How to play Deal or No Deal World slot?

Deal or No Deal is a slot with 5 reels, 3 rows and 20 paylines to choose from. There are however certain specifics, you should be aware of when learning how to play Deal or No Deal, which we've covered in detail in our article.

Can you play Deal or No Deal World online for free?

Yes, you can play the popular Deal or No Deal slot online for free. Simply check out our free Deal or No Deal World demo where you can try the game without risking your real money.

Which casinos offer playing Deal or No Deal World?

Any casino that offers games by software developer Playtech, should have Deal or No Deal World available for play. To ease our readers, we've suggested a couple of reputable online casinos where you can play Deal or No Deal World slot for real money. All operators are certified and allow players from all around the world.

180 Spins + £100 BonusOur casino suggestion for Deal or no Deal World
Overall Rating 9.4/10.0 Play here!
Full T&Cs apply, Spins: New customers only. 20 spins after signing up. 180 more spins after first deposit 20 immediately and a further 20 per day for the next eight days after depositing. Spins and bonus wagering on Age of the Gods slot games only. Wager 20x before withdrawing. Welcome Bonus: New customers only. Minimum deposit £20.Maximum bonus £100. Wager 40x before withdrawing. Game weighting applies please see below table. ID must be verified prior to participation. Bonus Betting limits: Slots - £5 All other games 10% of bonus amount.
PlaytechAll 189 Playtech slots at a glance
Popular Blog Posts
IGTAll 89 IGT slots at a glance
NextGenAll 111 NextGen slots at a glance
Home > Playtech > Deal or No Deal International