This Playtech sports video slot is based on the most popular game on the planet! It unites nations and is always full of emotions. Choose your preferred two teams and spin the reels right here for free! There is a chance to turn your passion into a cash winning adventure!

Want to play for real money? Make a bet at Casino.com – our top recommendation for January 2021. 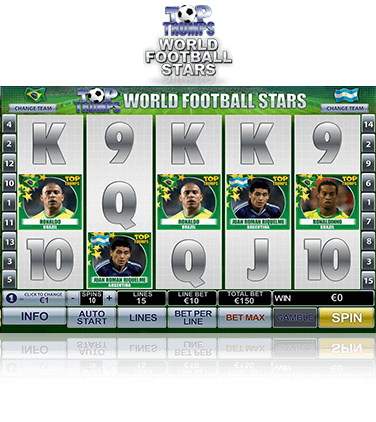 Short Review of the Rules and Features

Top Trumps Football Stars is a 5-reel slot with 15 adjustable paylines. The payout symbols can be modified as you prefer right at the beginning by choosing the two national teams which will compete. What you get are 3 players out of each team with an equal payout. Lines here pay both ways, the symbols of the first team pay left to right and of the second- right to left. The Free Games symbol appears on reels 1 and 5 with one of the two team’s national flags as a background. This awards 12 free spins with players on the reels only from the team whose flag was on the triggering symbols initially. Pass the Ball Bonus is the next fun feature. It starts when you score a ball on the 2nd or 4th reel with a player on its immediate left or right. The Ball gets passed between the player’s team members and 3x total bet is awarded for everyone who touches it.

Watch this Video to See the Game in Motion

Other Versions of This Slot

This slot has a newer version, also by Playtech – Top Trumps World Football Stars 2014 where you have football superstars on the reels but without the two teams, the competition and with lines wining only left to right. And if you ever want to pay tribute to all of the ultimate big names in the same field you can give Top Trumps Football Legends a try. Here you get similar bonus and free games features but with pictures of Pele, Johan Cruyff, Franz Beckenbauer and many.

The game starts with a male voice announcing the two chosen by the player national teams as a true sports commentator would do. Bets start from £1.5 going up to £750 and the highest paying symbol -the Wild, awards x10.000. You can hear the crowd cheering, the green field is right behind the reels and you are all set up to do some spinning. The mixed pay feature significantly increases all winning opportunities and turns the playing process into a highly awarding experience. Feel free to add your feedback or suggestions on the Top Trumps Football Stars slot in the comments section down below.