Red Tiger Gaming brings a modern twist to the classic slot game, Reel King Mega Slot by Astra Games in this new and improved version. The game has become quite popular among fan favourites of the original because despite having modern and enhanced attributes, it still stays faithful to the original’s features. It is widely available online to play for real money or demo play.

Feeling pumped about your chances on this slot, try Spinit – our expert pick to play this slot in January 2021 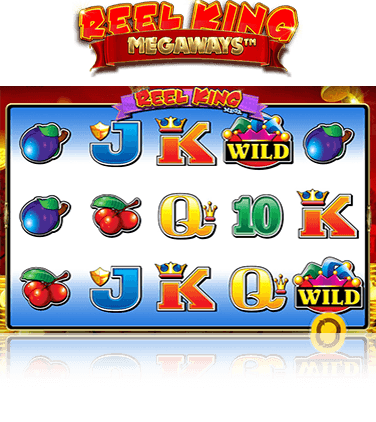 Red Tiger Gaming modelled the Reel King Mega slot game after the classic Reel King from Astra Games but with some modern enhancements. It is a classic themed game with five reels, three rows, and 20 paylines. The 5×3 grid is placed in the centre of the screen with a background filled with golden coins, and a soothing soundtrack accompanies the game.

The game uses a mix of classical fruits and card symbols as its paying symbols. The game has exciting features like the gamble feature and the Reel King and King’s crown that gives players higher chances of landing significant wins.

In this game, casual players can play with as little as 0.20 Euros, and high-stakes players can bet up to a maximum of 200 Euros, which makes the game a good fit for both kinds of players.

There is no scatter symbol, or free spins feature in this game, but it has exciting features like the Reel King, the King’s crown, and the gamble feature that makes it fun and fascinating. Landing three or more matching symbols from the leftmost reel to the right along any of the 20 active paylines will award wins.

Like many others, you get a win in Reel King Mega Online Slot game by landing matching symbols along on the active payline. The low paying symbols include cherries and plums that pay the same amounts, while 10 and J rewards players with similar payouts. On the other hand, the highest paying symbol is a gold bag that pays 500x for landing five symbols, followed by K and Q, which also offers high payouts.

The highest win obtainable in this game is 500x a player’s stake, which is very low compared to other slots. There is no wild symbol in this game, but there is a crown that randomly pops up during the game and turns any symbol into wilds. In addition to these, all symbols can appear as a 2×2 super symbol twice as big.

Bonus Features with Touch of Royalty

Even without a free spin feature, this video slot game still boasts a lot of other rewarding features that make it a premium among slot enthusiasts.

Reel King Feature: When all the reels are highlighted with a yellow background, the feature activates, and then up to five reels characters are triggered. Each reel king will have its special 3×1 reels that will spin to land either three red, yellow, blue, or mixed sevens to earn 25x, 10x, 5x, and 2x.

King’s Crown: After any spin, the King’s crown may suddenly pop out randomly and bounce around the screen to hit any random symbols turning it into wilds.

Gamble Feature: This feature can be selected after any win; the gamble feature will allow a player to spin a wheel. And if the needle falls on the green part of the wheel, you win the prize, and if it falls on the red part, you lose your winnings.

Many Slot game veterans love to play games that feature progressive jackpots because they could get the opportunity to be the jackpot winner one day. So, it is quite sad that the Reel King Mega Slot Machine doesn’t feature a progressive jackpot. But it would be an error for you not to try out this game because even without the jackpot players can still rake in decent winnings.

Hail to The King

Red Tiger is one of the best when it comes to slot games development, so it won’t come as a surprise that this game has a mobile version along with the desktop version that is simple and easy to navigate.

From our critical observation of this game, it is safe to say that everything you get or see on the desktop version of the game will also be found on the mobile version. The turbo, bet, spin, and autoplay settings are positioned well and easy to use on both game versions.

Reel King Mega Slot RTP of 96.17% a very decent returns feature compared to some other slot games. It is listed as a low variance game, which means that the features and winning combinations available in the game will often occur. This feature makes it a desired slot as players get to win often even when they don’t usually get a huge payout.

As a traditional spin the reels game, there is no particular strategy that can be used for this game. You keep spinning until you land a win, and like every other slot games. However, the low variance and Reel King Mega RTP ensures that players often win alongside the gamble feature available in this game offers players the chance to increase their winnings potentially.

As we have mentioned earlier, this game was modelled after the land-based slot classic Reel King, which can be found in casino floors for many years now. But you should know that this game is not the first online version of Reel King that was developed. Novomatic Gaming has already made an adaptation in the game also called Reel King, which has similar design and features as this game. Although Reel King has a less RTP ratio, it allows for a higher maximum bet than this game. But stay tuned to the Reel King Mega slot review for more awesome offers.

From this Reel King Mega review, we can see that Red Tiger Gaming has done an outstanding job creating an incredible modern online version of the original Reel King by Astra Games.

A feature that we believe would have made this game even more appealing is the free spins feature. But despite the lack of that, features like Reel King, King’s Crown, and the Gamble feature makes this game a favourite for many players. If you have played this game before, we would love to share your personal experience with us in the comment section.