Well of Wishes – Where Your Luck Never Runs Out

Fortune promises to smile on players in this video slot game from Red Tiger Gaming. Well of Wishes slot game is mystery-themed with exciting features and symbols that make it a favourite of many slot game enthusiasts. Items that are traditionally attributed to luck are used as symbols in this game. In this Well of Wishes slot review, we will cover all there is to this game.

Once you are ready to ride your luck out, try Spinit – our top choice for playing this slot in January 2021 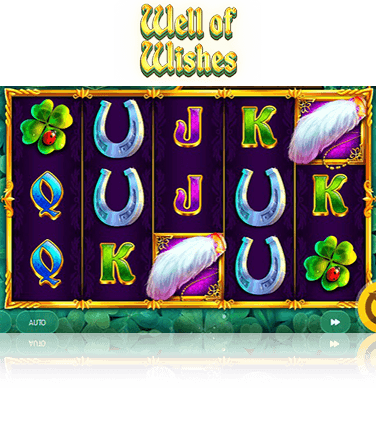 A Little Taste of Irish Luck

Red Tiger Gaming, an excellent game provider in the market, developed Well of Wishes online slot. Red Tiger Gaming developed this game as a fortune-themed game where players can try their luck on the five reels, three rows and ten active paylines.

The game is accompanied by Irish pipe music as the soundtrack, and it is set on a shamrock bed with a wishing well right in the centre. You will discover that traditional card symbols and some items associated with luck are the paying symbols in the game. The game also has some exciting features like Lucky Spins and Lucky Coins that make it intriguing and fun.

The two most exciting features in Well of Wishes slot machine are the Lucky Spins, which awards players with free spins and the Lucky coins features that act as wild, which helps players get massive winnings. Since the higher the stake per spin, the higher the potential winnings a player can earn, some players tend to bet the maximum amount, which is 20 Euros to try and get mega wins. Players that don’t make high bets can also play this game with as little as the minimum bet of 0.10 Euros.

This game has ten paylines that will award a win when three or more matching symbols land on adjacent reels starting from the leftmost reel to the right along with it.

Every Game of Luck Needs a Lucky Feature

Lucky Coin feature: Lucky coins can land on the reels during any spins, and it acts as a wild symbol of the current spin. Each coin collected is stored above the game display window and when the coins collected reaches five, they are thrown in the well granting a wish by changing a random symbol type for wilds. The well may also randomly swap another symbol as wilds.

Who Needs Progressive Jackpot When You Have Luck

A vital thing slot enthusiast should know about Well of Wishes slot is that even though it does not currently offer a progressive jackpot, it doesn’t mean that it would not have in its future updates.

Red Tiger Gaming is an impressive slot game provider that happens to have progressive jackpots available for some of their slot games and might later decide to include this game for progressive jackpots in future updates. So, it would be best if you kept in touch to stay informed about this.

Toss a Coin and Make a Wish

Pot of Luck in Your Pocket

Being able to play their favourite slot game anywhere and anytime is every slot game enthusiast’s desire. And to fulfil this wish, many slot game providers, including Red Tiger Gaming, ensures that they optimize their games for mobile play. This game is available to play on any mobile device, either Android or iOS. There is no notable difference between the mobile version and the desktop version of this game. Still, the buttons used to play the game are positioned differently on the two versions’ interface which optimizes the game to adapt to whatever screen the player uses.

Well of Wishes RTP of 95.76% is a standard return for slot games but relatively low compared to others. The game is a highly volatile game, which means that even though landing a win gives generous payouts, it occurs less often than games with lower variance.

No specific strategy can be used to win in this game. Although it is quite risky, it is a fact that betting big will earn massive payout if you manage to land a win, as the saying goes, the bigger the hand, the better the win. There are some useful functions available in this video slot like autoplay that can set the game to spin automatically, and turbo that can speed up the reels while spinning giving players a wide range of options.

Two Wishes better than One

Although this game is incredible, it has some attributes that make it less appealing to some players. For example, it has a low average return to player ratio and low maximum bet. Gaelic Luck from Playtech is a video slot game with a similar theme and features, but it boasts a higher RTP, higher potential maximum payouts, and a higher maximum bet than this game. In addition to these, Gaelic Luck also offers more free spins to players relative to this game with a limited number of free spins.

Conclusion – Make a Wish at the Well of Luck

Well of Wishes is an excellent addition to Red Tiger Gaming’s collection; it is a fascinating game with a great theme, aesthetic design, soothing soundtrack, and simple gameplay. Well of Wishes slot RTP is significantly low, making it a turn off for many high-stakes players.

We also observed that although this is a high variance game, it still gives more wins than is expected of such games. We are convinced that our Well of Wishes slot review has done justice to this game and would help players navigate the game better. We will also love to hear from players of this game for their thought in the comment section to help other players get familiar with the game.