This is a five-reel video slot featuring 30 paylines and symbols themed on medieval monarchy, maps and more. Historical buffs won’t have much to criticise because the game’s narrative doesn’t run very deep, and it’s a simple game with few animations.

Jousting for real money is possible over at Grosvenor Casino, a casino the queen would be proud of, especially for May 2021. 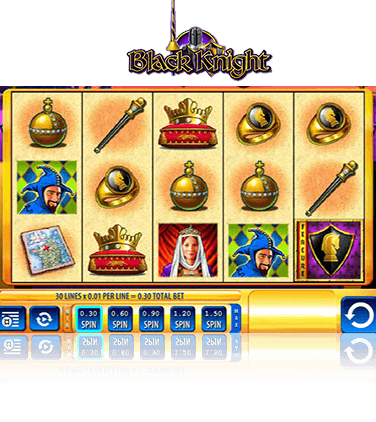 Real Money Casinos Where You Can Play Black Knight

The Black Knight symbol is this game’s wild, and it makes its entrance on reels two, three and four only. There is one special feature, identified by a rook symbol. Get three of these to trigger seven free spins, where any wild you then get is expanded and held along the entire length of the reel it appears on. It grants you the possibility of a really big win, but if you do strike lucky, you’ll have to put up with some rather odd happy hardcore space disco music, which bursts out your speakers like a frightened ferret. Following on from far more suitably regal music, it’s a veritable audio oxymoron that is more discordant than Ross Kemp on a gardening show.

The king symbol is the highest paying, followed by the rook, the queen, and the Jester. Low paying symbols include a crown, a ring, a map (of France for some reason), a golden ball and a wand. The 30 paylines are selectable, and the bet wagers vary flexibly from 1p to £5.

Black Knight won’t win any awards any time soon, but it is your average slot fare that can yield big wins on a lucky day. The bonus feature with seven free spins isn’t enough to write home about, and there are more generous slots out there, including in the Scientific Games library. Graphics are neat and tidy but unremarkable, and it’s yet another slot from this developer that will have you reaching for the mute button before the spin button. The return to player rate is decent – anything around 96% is worth a slice of your time, but again, it’s not out of the ordinary. What did you think of the game? Let us know below!