A Few Poker Alternatives to Give a Try

Here, we plunge into the different versions and hand ranking of classic poker games like Casino Hold’em and Omaha, or you could read about the alternatives where the lowest value hand is a king and obtains the pot. You may also be surprised to discover that Strip Poker is often an ice-breaking game during Swing parties. Did you know that there is even a Strip Poker tournament? 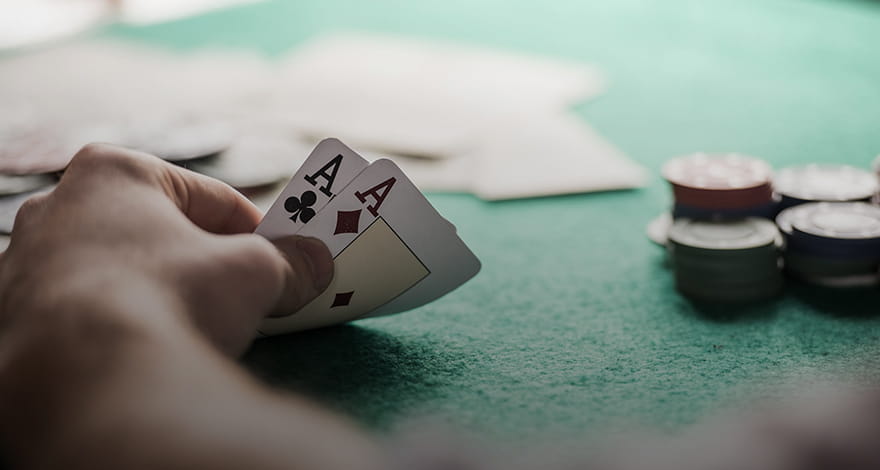 How to Play Omaha: The Basics

The greatest difference between Omaha and Hold’em is that each member receives 4 cards rather than the 2 cards like in Hold’em. Additionally, contestants must play with the 2 out of the 4 cards dealt consisting of their hand. The game is joined by 2 to 10 players.

There are two case scenarios in which you can be the winner.

If you are playing in a tournament or a real game with friends, check out why blind bets are necessary and who sets the first small, and sequentially large bet on the video down below.

When you get to play poker online, you wouldn’t need to select blind bets as initially, you would need to bet and then ask for the dealer to provide you with cards.

Providing that you play against the computer, when bets are placed, and cards are dealt you would have to select one of those three options to play your hand. Often, the dealer would reveal his cards before you consider yours. Still, those are the steps that you can undertake.

Nonetheless, to make your decision correctly, you should know the 10 types of poker hands and their ranking power – the most powerful hand is the Royal Flush while the worst hand to qualify in the session is the High Card one. Still, it is better than a hand that does not qualify at all.

After you make up your mind, the dealer provides three new cards on the table. Consecutively, the next betting round begins.

Once you determine whether you want to check (if there was not bet before), call or raise, the dealer adds one card next to the previous three cards that have been dealt, namely the flop.

Again, the subsequent betting round onsets. The procedure repeats and the dealer provides one last face-up card to the flop. It is time for the last betting round which will determine the winner in the game.

Even though the hand ranking remains the same as in Texas Hold’em, Omaha style brings some subtle differences in the hand value.

The graphic depicts the 30 best starting hands ranked in order from the most to least influential in Omaha. The “T” stands for 10 or better while “x” is any other card from 2 to 7.

The Razz poker originates from the Stud style while Omaha is a substitute to the Texas Hold’em. Perhaps, you could also encounter the Razz Poker as 7 Card Stud. The best Ace to Five hand collects the pot amount. Also, this poker game is very adaptable, as there is no 8 or better rule to generate a winning hand combination. Players are usually given 7 cards during the game, but only the best 5 low cards are used. Therefore, those are the combinations for a successful hand from the most to least prevailing hand combo.

As you can see from the table, the most powerful cards, the ones having better odds of winning the pot are those cards having the lowest value in comparison to traditional Texas Hold’em style. Pair of Aces, Kings and Queens are the least likely to secure you the chips in the pot.

Before starting the game, you would need to pay your ‘fee’ for taking part in the game. That is how the initial pot is raised. So, the ante bet is a contribution to the pot. The bet amount depends on the rules of the game.

Then, you would acquire three cards to play with. 2 cards are down and 1 is up. The player with the lowest (in this case, the greatest) exposed card is the one to start the game by making a new ante bet.

Next, you would get another face-up card. The performer with the lowest, but strongest card considers whether to check or bet. The betting rounds repeat until the seventh card is provided. The participants would opt for the fold, call or raise command. The first member to act is the one with lowest exposed card.

If there is more than one player in the game left it is time for the ‘Showdown’. All players reveal their cards.

Since the 8-card rule does not apply in this game, there is no qualifier and the best lowest hand wins the game. Provided that there are equal value hands, the pot is split between the winners.

Stripping on the Table, Not for Real though

It is a variety that you certainly be able to find online. The good side is that you don’t need to get bare. Though you may if you feel more comfortable.

Strip Poker games can be of any kind. In addition to Omaha and Razz, you would find Caribbean Stud, Draw Poker and Video Poker to have included striping into the dress code of the croupier. You can also select between male and female actors.

Though you can find real dealers undressing, sometimes games provide a digital image of the opposite player. The practice shows that most characters are female. Graphics appear sublime.

Rules declare that when the dealer loses the round or the four times in a row, they take a piece of cloth off. You could also find games where you get rid of your digital ‘cloths’. There is a great variety of poker games, limits and design. 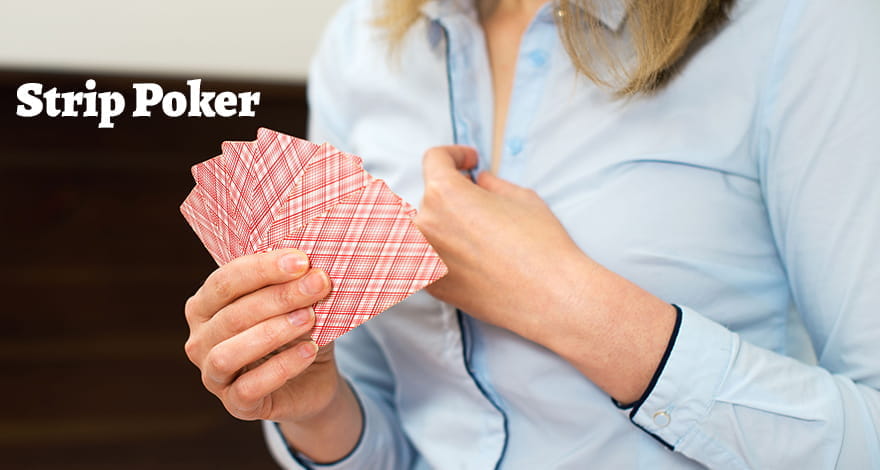 In reality, the only difference between poker and strip poker is the use of cloths instead of chips. The first evidence for the existence of the style was spotted in 1916. At that time, women were just beginning to have voting rights from the governments around Europe.

Nonetheless, initially, the games were of the same gender type. Young boys who had no money were seeking an alternative so they could continue playing in high-limit tournaments. And since, back then, the rules were determined by the host or a single player, the game was shaped by the greedy ambitions of the rich.

Mixed games grew popularity in from early 1940 to 1960. A few theories exist to why women were included. But certainly, everyone was enjoying that new liberating feeling. From aroused students to old married couples revitalising their love for life.

At present times, strip poker is used as an ice breaker games on swing parties. Even more, the largest strip poker tournament was held in Café Royal, London in 2016. The winning pot was £10,000 while 195 participants joined the tables.

White Sands, Palm Trees and the Caribbean Way of Life

The Caribbean Stud can be a bit misleading defining the rules of the game by the name. The play originates from American casinos where opponents bet against the croupier rather than other players and their 5 cards are allotted at the beginning of the game, instead of dealing one card each round, as in the stud version, for instance, the 7 Card Stud Low.

After the cards have been distributed, and one of the dealer’s cards is face up, the player must make a decision:

The type of poker is played with one deck of 52 cards. After the last round, the participants enter the ‘ Showdown’.

In case that the dealer does not qualify with an Ace or King and higher value hands, the ante and call bets are refunded as well as a cash amount equal to the ante bet.

Provided that the croupier and the opponents qualify all together, even money is paid out and a call bet sum according to the payout fixed outs attributed to the hand.

If the bank registers an Ace or King while the player’s hand is weaker, then the cash is lost.

If both have equal hands in weight, the ante and call bet is returned to the player.

The Ultimate Poker Game for Beginners

Casino Hold’em is an especially beginner-friendly game as no complicated rules or pressure to bluff and beat other players exist. The only pressure you would feel is taking the house edge down. In comparison to Texas Hold’em where you would compete for the pot with other players.

Primarily, the Casino Hold’em as any other poker variant starts with an ante bet. All other players must place their initial bet as well. If you would like to increase your bet, you can make a side bet, namely a Bonus Bet.

Once bets are set, opponents get two-hole cards each. Then, similarly to Omaha, follows the community card dispensing. At first, only 3 cards are given face up on the table, called the flop. 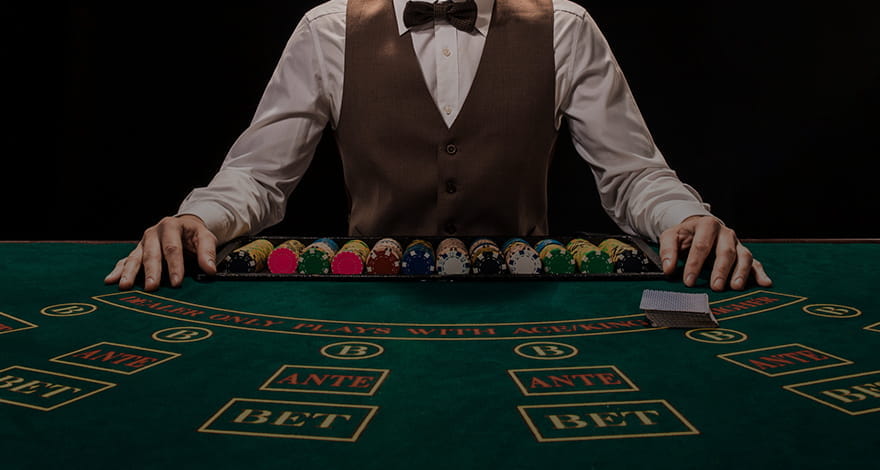 Next, according to your 2 cards and the 3 dispensed cards on the table, you would need to call or fold. The ranking of the hands is similar to Texas Hold’em and Omaha. Royal Flush is the best combination that you could have while a high-card is the lowest hand that qualifies for the pot but is highly unlikely to win anything.

When you decide to call, the two other cards of the community would be revealed on the table. Succeeding, the dealer shows up his hand, and the winner in the game is determined.

You could also join a live Casino Hold’em game if you are seeking the human contact of the dealer.

The house edge of Casino Hold’em is fixed up to 2,5% which makes the game more complicated than blackjack and other card games. But there are also plenty of calculators online to help you make the best decision if you are still learning how to play.