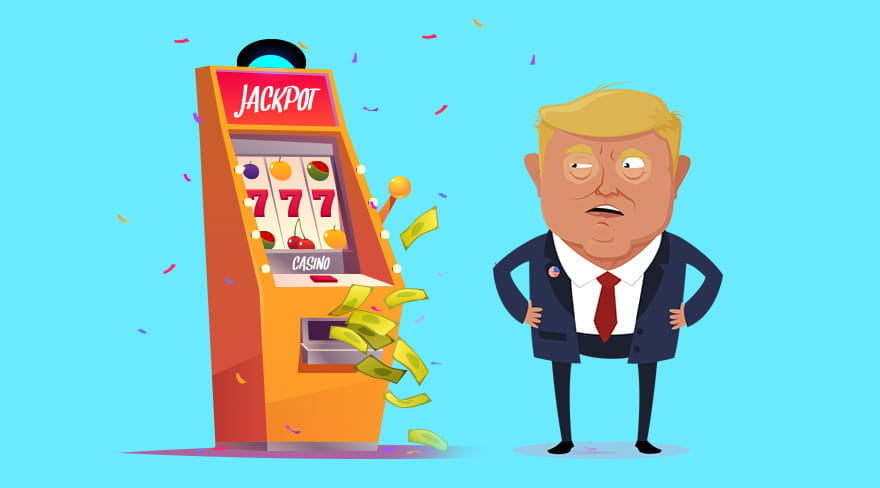 This decade started unexpectedly, to say the least. However, we all knew one thing was bound to happen – the US presidential election. Speaking of which, Mr Trump tends to be blunt and say whatever is on his mind, often turning himself into a laughingstock.

Which leads us to the theme of this article, the top Trump slot machines online. Stay till the end to find the top slot apps featuring the American President. But before we dive into telling about the best Donald Trump slot machine, let’s take a look at the highlights of each in the below table:

The best Donald Trump slot machine for 2021 is Rocket Men by Red Tiger. The game features President Trump and Supreme Leader Korea Kim Jong-un. Play pretend WWIII on your mobile devices no matter where you are. All you need is access to the internet to log in at the selected online casinos offering the slot. 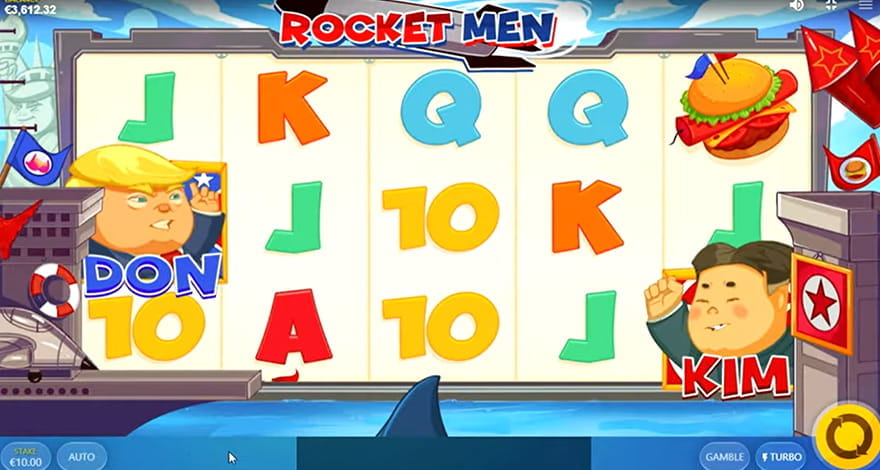 Brace yourself as Red Tiger took inspiration from the time the American Head of State was going to meet the North Korean threats with “fire and fury never seen before. To tone down the seriousness and increase the cheekiness, the developer incorporated cartoon-like graphics and sound effects.

Trump It is created by a software provider known for its high-quality games, Fugaso. This slot is optimised for mobile play and is offered at selected online casinos. To play Trump It on the go, you need a device with a relevantly new version of Android. Without a doubt, Fugaso created one of the cheekiest online Trump slots. 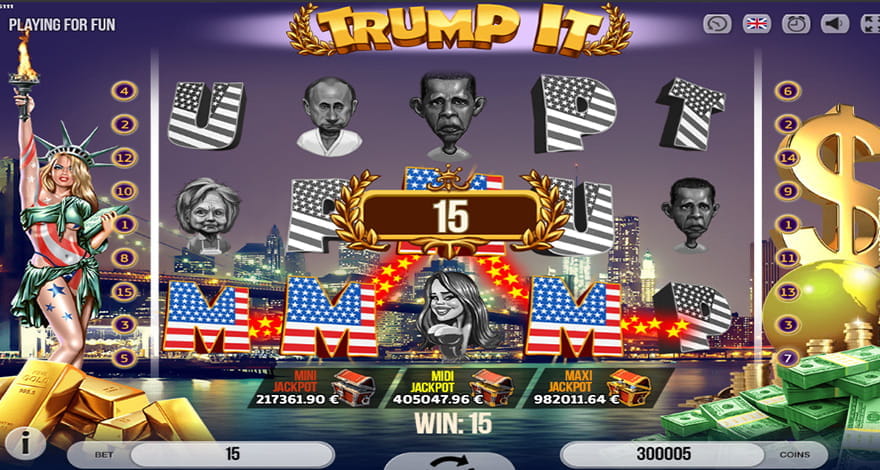 Unsurprisingly, Russian President Vladimir Putin is one of the important symbols. In the game, Barack Obama and Hilary Clinton are both presented as lousy losers. Other symbols include a Mexican and a foxy redhead. From the sexy lady Liberty to the piles of cash and dollar sign, the visual effects scream ‘MURICA. Plus, the sound effects are funky and enjoyable.

Next, in our Trump slot machines ranking, is another game from the Trump It series by Fugaso. Similarly, you can only play this slot online at selected casinos. Trump It Deluxe is optimised for mobile gaming, so you enjoy it on your smartphone or tablet. This time around, the creators took a funny spin on international politics. 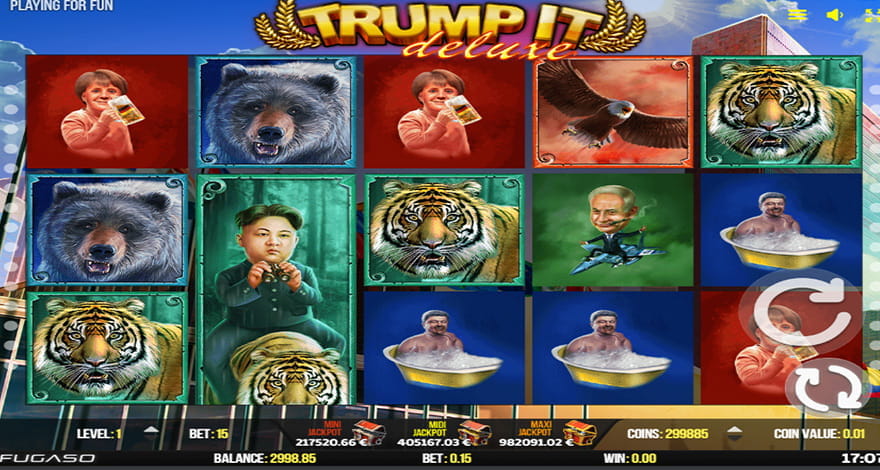 Fugaso’s impeccable graphics present some of the popular heads of state in an unusual light. For instance, the infamous Kim Jong-un is riding a tiger, and the stone-cold Vladimir Putin is petting a bear. The intro video shows the politicians under the same roof having fun, and the song playing is a version of Despacito.

The final top Donald Trump slot machine in our list is the latest addition to Fugaso’s infamous series – Trump It Deluxe Epicways. Just like the previous two games, this one is optimised for mobile play, and it can only be played at selected casinos. With this slot, Fugaso takes us on a journey to the wild west in the US of A. 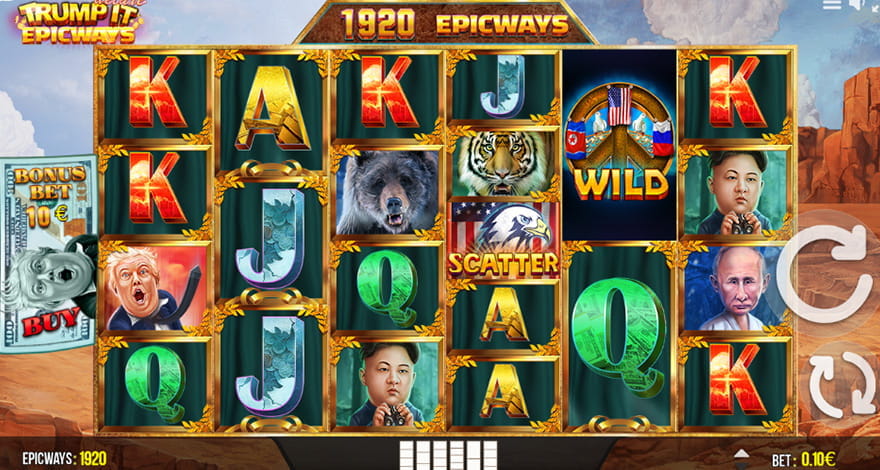 Heads of State of the likes of Vladimir Putin and Kim Jong-un are featured alongside President Trump as symbols in the game. The graphics are just as great as those of the rest of the games by Fugaso. The sound effects transport you right in the middle of the desert and every now and then you hear Mr Trump’s iconic slogan – Make America Great Again!

Enter the White House with President Trump slot by Super Lucky Casino. Enjoy the free Trump slot machines online and offline at any place or time. Simply, download the app from Google Play store. Also, you do not even need the fanciest new mobile phone to install the game, just a device with Android version 2.3.3 or up, and 46 MB. 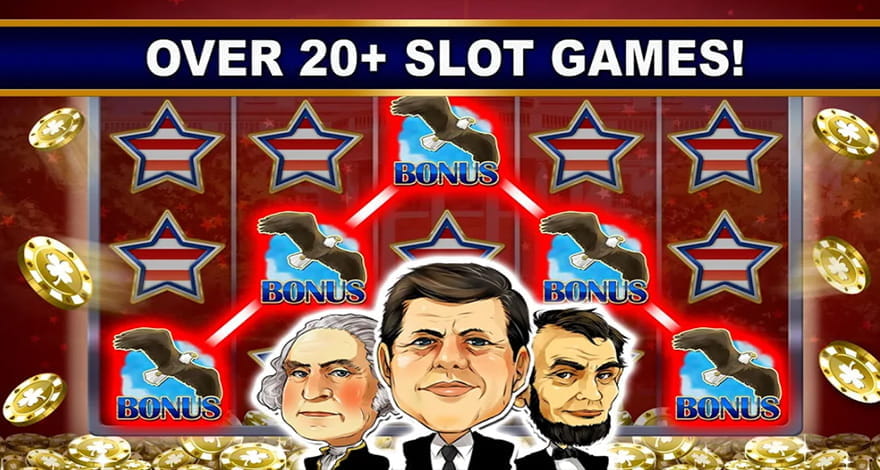 When playing the game, you get a chance to meet President Trump. On top of that, Super Lucky Casino’s slot features previous tenants of the White House like Bush, Bill Clinton, JFK, and many more! The President Trump slot is packed with many different jackpots, and the symbols and music for each resembles key elements of the corresponding era.

This probably the best of Trump Hillary slots and it takes us back to the 2016 US presidential election. This is yet another game you can play online and offline. Megarama Games launched the app on election day and was quite a hit. Today, you can still find it for free at Amazon. Your device must have at least Android 4.0.3 and 51.2 MB to download and run the game. 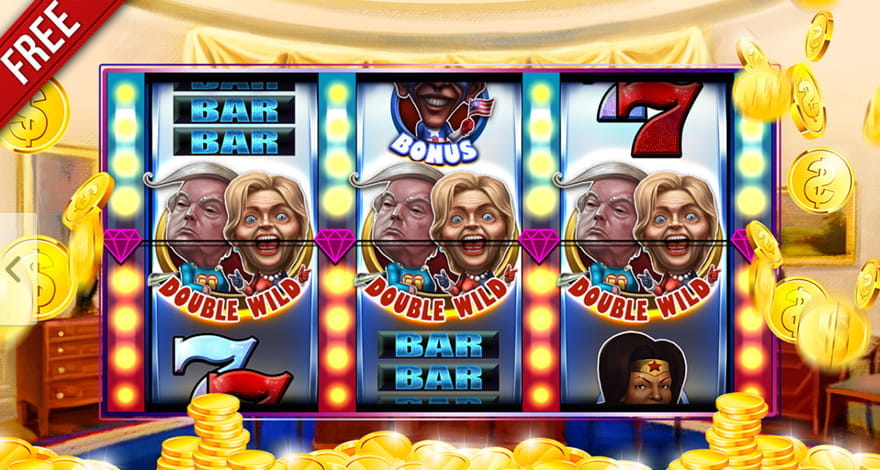 As you would imagine, the primary focus is on the iconic presidential battle between Mr Trump and Mrs Clinton. But the fun only starts here – Megarama Games’ app offers over 30 slots featuring well-known political figures like the Obamas, George W Bush and even Bernie Sanders. Enjoy the sharp and detailed graphics on the go! 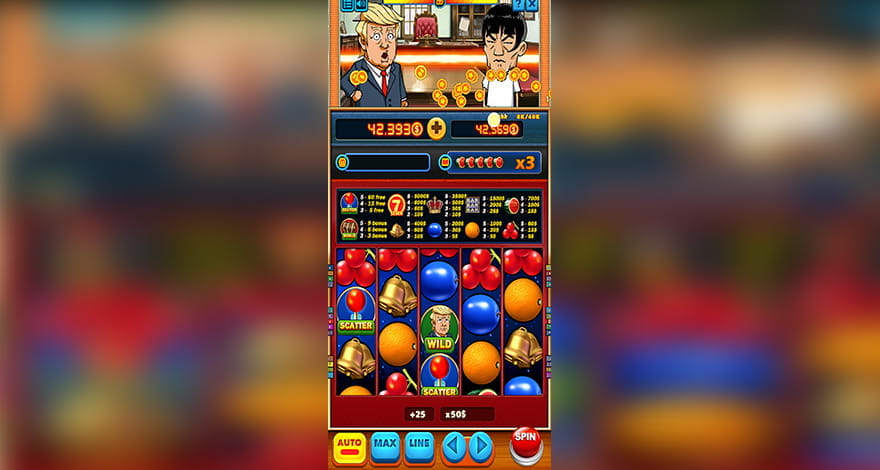 Next, we have Hot Trump Casino Slots by the Korean developer Funny Apps Plus US. Lucky for you, the game can be used both online and offline. This application offers two Trump slots and eight casino games such as roulette and poker. To download the app, your device must have Android 4.1 or up, and 40 MB.

This game presents Donald J Trump as a vigilante fighting against all villains of the modern world. But there is a twist – Mr Trump first takes all their money and then sends the criminals to jail. The developer chose anime style for the visual and sound effects. The characters look and sound just as if they are out of an anime series. 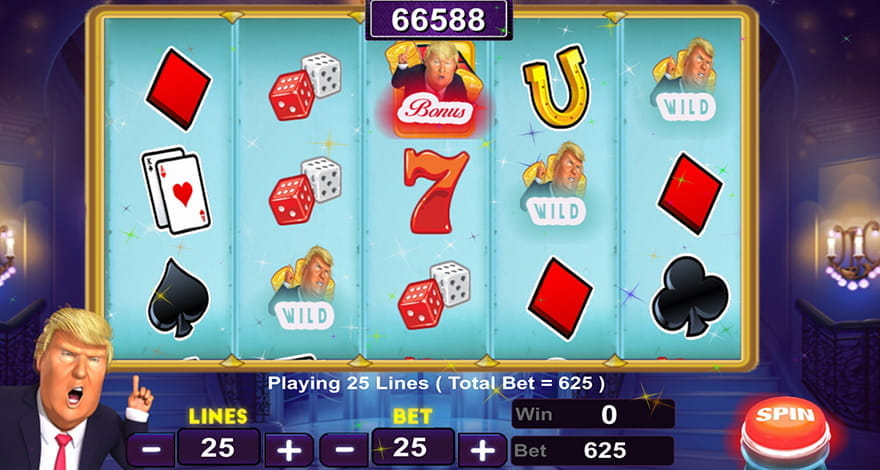 The last of the top Donald Trump slots on Android is Trump Casino Slots by Adictivo. This application offers three different slots with Don cheering you on the side. Also, all in-app games are available online and offline. To install the game, you need an Android device with OS version 4.0.3 or higher, and 38 MB.

Unlike, most of the games we discussed today, this one is not politically oriented. Each of the three slots has its own symbols, but all of them are rather traditional ones like numbers, letters, diamonds and such. The combination between the cartoon-like graphics and the up-beat sound effects transports you right in the middle of a Vegas casino.

Hopefully, by now, you know which is the game you will play next. However, if you happen to have any more queries about the best Trump slot machines, then you are in luck. In this section, we have listed the top questions by players on the topic with the corresponding answers below each.

After our thorough search of the web, we found the best Trump slots and ranked them in this 2021 top list. Without a doubt, the best one is Rocket Men, showing Trump and Kim Jong-un recklessly firing nuclear weapons. The rest are from the popular slot series Trump It by Fugaso.

🔝 What is the best Donald Trump slot machine online?

The #1 Donald Trump slot machine this year is Rocket Men by Red Tiger. The game presents the worst-case outcome from the political argument between the American President and the North Korean Supreme Leader Kim Jong-un. Lucky for all of us, it is all fun and games.

🆚 Are there any Trump Hillary slots?

Of course, that software developers will not miss the chance to create Trump Hillary slots based on the feud between the politicians, especially with all the media attention it gets to this day. However, no matter your political views, we are certain that you will find Trump v Clinton quite entertaining.

👨🏼‍ Are there any Donald Trump slots on Android?

There are a number of Donald Trump slots on Android that you can play, although it is surprising that there is not a single Trump game for iOS. Regardless, if you happen to own an Android device, then make sure to check out our recommendation of top Trump Slots for Android.

🎰 Where can I play Trump slots online?

Somewhat to our surprise, the controversial Trump slots are not available in tons of casinos. However, we found a couple of operators that dare to include these games in their portfolios. You can find Rocket Men in 888 Casino and whole Trump It series at 22Bet.