Poltava – March Your Way to Victory

Sweden’s ELK Studios has decided to give us all a history lesson with this war themed video slot. The game draws its name from a decisive 18th century battle during The Great Northern War. Peter I of Russia defeated Swedish forces in Ukraine thus signaling the end of Sweden’s influence in the region. However, this beautifully designed game will ensure this developer’s growing prominence in the world of online slots. Use the power of wilds, marching reels, and the flames of war to try and change history. Try the game in our free demo below.

Thirsty for more? Play the game for real money at Casumo Casino, the top casino for April 2021. 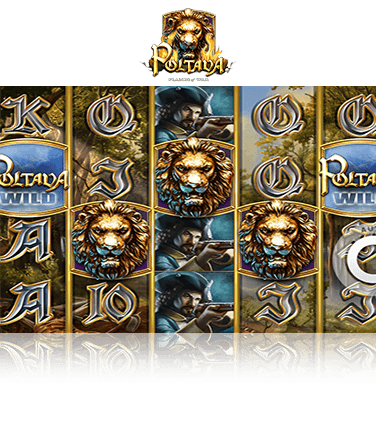 Poltava, from ELK Studios, has five reels, four rows, and 40 paylines that pay from left to right. The developers took almost nine months to produce this slot, and the game’s beauty is proof of their hard work. The slot’s transparent reels allow you to enjoy a background depicting a war-ridden forest. The symbols are all exquisitely drawn, and feature a wild, lion bonus icon, letters, and a horse, cannon, and soldier who represent the cavalry, artillery, and infantry respectively. The wild is the highest paying symbol and replaces all others except the lion. The game’s marching reels feature made us feel as if we were right in the middle of this epic battle. The marching reels feature is activated if you spin a full-stack of either the horse, cannon, or soldier. This bonus triggers a respin. If any additional weapon symbols appear on the reel to the right of the stacked symbols, the icons will advance forward like an army advancing on a battlefield. Symbols quickly begin to fill up multiple rows, this leads to huge wins. The Flames of War bonus game is activated by hitting three lion symbols, which turn into sticky wilds during the bonus game. For the bonus round, the player is awarded three free spins. Each new lion spun during the game, will turn into a sticky wild and award an additional free spin. The more lions, the more decisive your victory will be.

Poltava is a beautiful addition to the world of war themed slots and is perfect for those history-loving gamers. Vivid artwork and unique marching reels were more than enough to bring this pre-modern theme into the modern era. The payouts during normal play tend to be quite small, but the bonus rounds can lead to some sizeable wins. It has an RTP of 96.4% with a maximum payout of 180,000 coins. ELK Studios has released a fun and rewarding slot that adds a nice touch of seriousness to an extensive catalogue that is chock full of humorous titles. We look forward to hearing your opinion. Let us know what you thought in the comment section below.