The year 2014 was the UNESCO Year of Crystallography. ELK Studios released this chemistry themed slot during the same year in hopes of capitalising on the world’s excitement for the event. Unfortunately, the developer may have misjudged our interest. At the risk of offending a few people, we’ll go out on a limb and guess that for most of us, chemistry was not the most exciting subject in school. Well this game isn’t that exciting either. It lacks some of the key elements found in games from this developer, and in the end, this scientific slot feels kind of basic. Try a free demo below.

Are you done experimenting? Then you can play for real money at Casumo Casino, the top casino for January 2021. 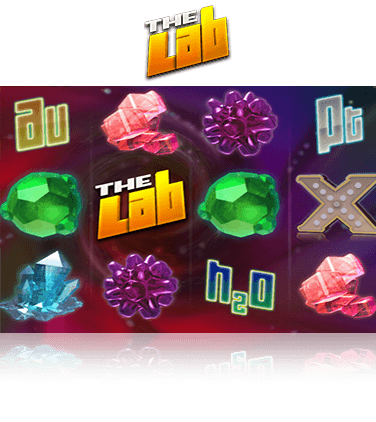 Real Money Casinos with The Lab

This game from developer, ELK Studios, is a five-reel, three row video slot with 15 fixed paylines that pay left to right. It is visually appealing with transparent reels that reveal a spinning vortex in the background. The vortex is key to the unlocking the bonus game that will help unlock the secrets to creating some winning compounds (more on that later). There are eight normal symbols. There are four crystal molecules, and four element symbols that correspond to elements on the periodic table and common compounds: gold, platinum, oxygen, and water. The green crystal pays up to 1,000x your bet and up to 2,000x in free spin mode. The game features an X-shaped scatter symbol, which multiplies your wins by 2x per visible symbol. The last symbol is The Lab symbol. If this symbol lands on the vortex in reel two, the bonus game is activated. During the bonus game, this icon becomes a wild that substitutes any symbol. The free spin bonus game won’t be winning any Nobel Prizes for originality, but it may lead to some sizeable payouts. When the bonus round starts, you are awarded with ten free spins. Two reels pop up to the left of the grid, these are the reels that spin during the bonus game. All winnings during the bonus are doubled. If you spin any X scatter during the round, your score will double again.

Watch a Video Preview Below

The Lab could have been an interesting game, but in the end, it left us feeling more bored than we were in chemistry class. The game looks nice, but its symbols didn’t really garner a reaction from us. ELK Studios has done a fantastic job producing games with silly and endearing characters, but this slot was a step in a different direction. Although scientific experimentation should be encouraged, we felt this developer should have stuck to its winning formula. However, we would like to stress that this game is not bad, it just isn’t what we have come to expect from the developer. Perhaps that is why this video slot is hiding at the bottom of its games page. If you’re looking for a basic game with a decent RTP of 96.30%, then perhaps this is the slot for you. Did you feel our review was too acidic? Let us know in the comment section below.