ELK Studios’ slot is an ode to the men and women who work tirelessly to make films for us to enjoy. It presents both sides of Hollywood: the glamorous stars, and the hard workers behind the camera. The game features wilds, and a free spins bonus game, in which five unique characters, resembling the polarizing minion characters, work hard to earn you payouts as large as the silver screen. It definitely has enough lights, camera, and action to satisfy any seasoned gamer. Try a free demo below.

If it’s real money you’re after, then “pan” over to Casumo Casino, the top casino for October 2021. 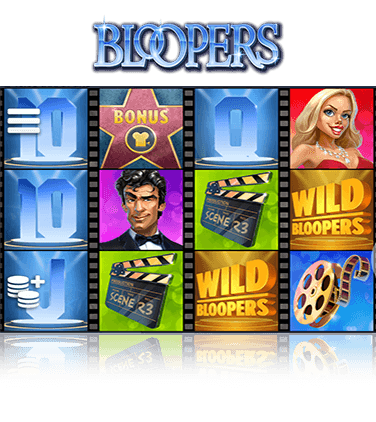 Bloopers is a five reel, three row slot with over 243 ways to win. The reels are in the style of filmstrips, which sound like an old film projector when spun. It is rare to find a game that has a visual theme that is so cohesive. The highest paying symbols are the male and female actors. The Workers at Elk Studios were committed to make this game as realistic as possible, and thus they made the actor pay more than the actress. The other symbols are of a director’s clapperboard, film reel, and a few miscellaneous letters. The wild symbol substitutes for all symbols except the bonus star. Players can unlock a free spins bonus game if they spin three or more bonus stars resembling those of the Hollywood Walk of Fame. It is from the bonus game that the slot derives its name.

During the free spins game, either the male or female movie star, who appear on reels two, three, and four, turn into sticky wilds. The bonus round ends when the sticky wilds cover all three positions on reels two to four. In this mini game, five behind the scenes characters, each with their own unique skill set, work hard to manipulate the game’s pieces into high paying combinations. The Stunt Man creates expanding wilds. The Cutter snips the reels to make symbols fall. The Fix-It minion moves around symbols into positions that pay the best. The Sound Tech creates Random Wilds, and the Make Up artist uses her brush to wipe away the sticky wild actors. The Make Up artist helps to keep sticky wilds off of the reels, and thus extends the bonus game. The more active characters, the higher your chances of success during this award season. Before the camera starts rolling, we suggest you look at ELK Studios’ unique betting strategy feature. Four unique betting strategies ensure that players can fully customize their gaming experience. The Optimizer, Leveller, Jumper, and Booster strategies adjust depending on how much money you have, or whether you are winning or losing.

The movie theme that permeates throughout Bloopers is a welcome change from other typical slot themes. The carefully designed reels, symbols, and the game’s lush cinematic score result in an exceptionally cohesive theme. However, it is a little suspect that the developer chose to model this slot’s characters after those of a beloved children’s film. Nevertheless, with over 200 ways of winning, and an RTP of 96.1%, this game is surely worth repeat viewings. It should be noted, that like most games that have numerous ways to win, sometimes the payouts can be small. But if you enjoy this style of game, this slot may be perfect for you. Let us know what you thought about the game in the comment section below.