Ivanhoe – As Classic as the Story It’s Based On

ELK Studios’ slot is one for its Swedish audiences. For no explicable reason, every New Year’s Day, Swedes watch the 1982 movie of the same name as the slot. This game uses a retro theme to capitalize on the feeling of nostalgia built by the Swedes who grew up watching this film. However, there is such a fun mini game that even those without a connection to this New Year’s tradition will have a merry time watching the Normans and Saxons fight for England’s future. Try a free demo below.

If it’s real money you are after, then you have the ability to play at Casumo Casino, the top casino for July 2021. 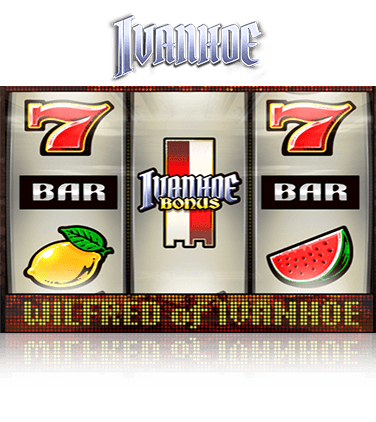 Ivanhoe is a three reel, three row, slot that is as classic as the story that it is based on. There are 17 different paylines that pay from left to right. At first glance, this game may look lacklustre compared to other slots by ELK Studios, but the developer included enough swashbuckling nostalgia filled action to satisfy any adventurous heart. The game symbols are the ever-trustworthy lemon, cherry, bar, and high paying red seven. There is also a bonus symbol and a crown, which turns into a wild once the bonus game is unlocked. The slot’s true adventure begins when you spin three bonus symbols. The bonus game is made up of five challenges that our prince will have to overcome in order to restore Richard the Lionheart’s right to the throne. The first level awards five free spins, each subsequent level progression awards you with three more free spins. Any bonus symbol rolled during the bonus game will give one additional free spin. As the challenges get harder, the payouts get bigger. The successful completion of all five levels can award you up to 300,000 coins. Fans who love the look of old school arcade games will love fighting, jousting, and shooting their way through these trials.

It would not be fair to compare Ivanhoe to other slots in ELK Studios’ catalogue because it seeks to provide a different gaming experience, one for the fan of the classics. The developer has a long track record producing great games, and this one is no different. The game may look simple, but when it comes to this nostalgic theme, the game developer shot, and hit a bullseye. The bonus rounds that play on the screen above really helped bring this retro slot into the modern age. Having a plethora of bonus features to look forward to is always fun, but like the Swedes on the dawning of a New Year, it is nice to bask in the comfort of something familiar ever so often. Even with the high volatility characteristic of many classic slots, this is a Hero’s journey Joseph Campbell would be proud of. Do you agree? Join the conversation in the comment section below.