Have you been suffering from boring video slots? Then we have found the potion for you. Frog Grog slot is set in a witch’s hut, but instead of finding danger, you will be given rewards on this adventure. The game from developer Thunderkick features a burping wild, multipliers, and a mystery game that will surely leave you under this game’s spell. If the slot sounds alluring, try a free demo below.

If the demo leaves you feeling bewitched, you can play for real money at 777 Casino, the top casino for April 2021. 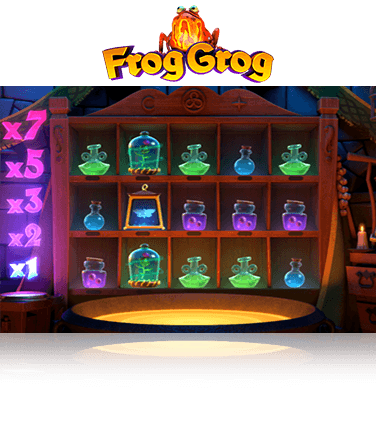 Frog Grog has five reels, three rows, and twenty-three fixed paylines that pay from left to right. The symbols in Thunderkick’s slot are comprised of standard ingredients found in a witch’s cupboard. There are three different coloured potions and a heart. The two highest paying symbols are the moth and the rose, which can pay up to 1,000 and 600 coins respectively (if five are spun). The wild starts out as an orange like toad, whose toxic burp clears both his reel and row of all symbols other than other wilds. The wild substitutes for any other symbol. During every spin, all symbols in a winning payline are replaced with new symbols. Each time new symbols fall into place the score multiplier increases with the potential of reaching a 7x Bonus. This also applies to the symbol clearing wild’s burps. The bonus round, or mystery game, is triggered when no new symbols can drop. During the mystery game all symbols are removed except for the games two highest paying symbols, and the wild. Symbols that are removed, award coins according to the pay table. The slot’s multiplier also increases during the mystery game, as you brew a potion in the witch’s cauldron. After the game’s conclusion, the multiplier increases one step for each time you won during the mystery game. This last payout will have you believing in magic.

Thunderkick has developed a slot so irresistible, that we were convinced we were under a love spell. The slot’s eerie background music sounds as though it was imported straight from one of our favourite Tim Burton films. The soft lighting of the witch’s lair makes this the perfect game to play while burning the midnight oil. Frog Grog’s features give you all that you need for a night of fun, so no need to run to the off-licence. Remember to leave some breadcrumbs, because without them, you may find it difficult to find your way back from this game. Were you left enchanted like we were, or could you break out of this game’s spell? Let us know in the comment section underneath this post.