Hidden – A Theme as Old as the Pyramids

We don’t really know where to begin when talking about this Egyptian themed video slot from ELK Studios. It was hard to tell what had been straining our eyes more. Perhaps it was the game’s sunny desert landscape, but something tells us it was all the time we wasted scanning the screen for any trace of Egyptian people (spoiler alert: we couldn’t find any). Maybe they were busy digging for the treasure that the main characters are collecting. If you find yourself longing for the old age of empire, this may be your game.

If it’s real money you’re after, then you can play this slot at Casumo Casino, the top casino for April 2021. 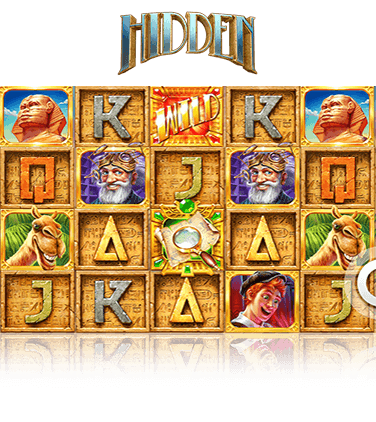 Hidden, from ELK Studios, has five reels, four rows, and 178 connecting paylines that pay from left to right. The game is set at the Egyptian pyramids. This is an interesting theme, and there is a reason it is so common, however, this developer failed to add anything that the typical seasoned gamer wouldn’t have already come across. The highest paying symbols are Professor Taylor, and his suspiciously enthusiastic nephew Benjamin, who have travelled from rainy London to try their luck at treasure hunting. The rest of the symbols are a mixture of iconic Egyptian imagery and letters on hieroglyphic blocks. A wild icon substitutes all symbols except the magnifying glass.

There are two bonus games in this slot. The first one, titled Flashback Respins, is randomly triggered by normal spins. This adds some excitement to every turn of a rather dull game. It is probably best for lovers of history to turn away. During this round, the pyramid in the background transforms into what looks like a gaudy resort while music plays that sounds like an Arabian take on 50 Cent’s Candy Shop. The Treasure Room game has five free spins and is activated by three magnifying glass scatter symbols. At the beginning of the Treasure Room a random symbol is designated as an expanding symbol for the length of the bonus game. If this symbol appears during one of the free spins, it expands, and all other icons get cleared away to make way for new, potentially high paying, symbols. Any time a scatter symbol appears, an additional free spin is awarded.

There is no question that the Hidden slot looks beautiful, but ELK Studios did not add anything fresh to an Egyptian theme as old as the mummies themselves. It lacked the fun intro that usually add a nice narrative to slots from this developer. We would have written a much harsher review had the slot’s RTP of 96.3% not lead to some nice payouts. It is fitting that all of the spins in the bonus games are free to the user, the Brits felt the same about the treasure they found in Egyptian archaeological sites. In the end, we feel that there are far worse options you could spend your time playing. We just felt that the developer would have needed to add more to the game for this stale theme to keep us interested. Do you have a different opinion? Let us know in the comment section below.