Over the last few years the internet has been plagued by trolls. However, in ELK Studios’ video slot, we have found a troll that is safe to feed. Support the quaint family-owned casino, the most shockingly fun one in the entire troll forest. This slot features sticky wilds, multipliers, and imploding symbols, which add up to one supercharged gaming experience. Try a free demo below.

Did you find the demo electrifying? Then play for real money at Casumo Casino, the top casino for January 2021. 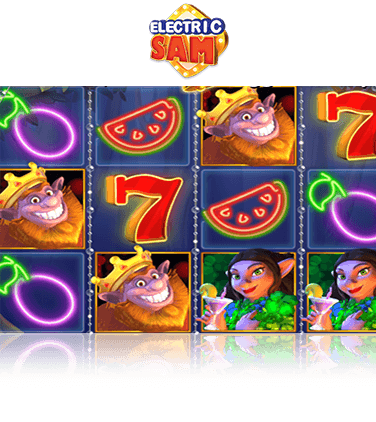 ELK Studio’s video slot has a five-reels, three-rows and a staggering 243 ways to win. The game is set in a casino run by a refreshingly benevolent family of trolls including: Maggie (the daughter), Sandra (the mother), and the patriarch Sammy, who the slot is named after. The game’s symbols include the three trolls, a wild (replaces all symbols but free spins), a bell-shaped free spin symbol, a seven, and four neon fruits that are found in most classic slot machines. This also includes an electrifying free spin bonus game that is activated by spinning three or more bells, which reward up to 15 free spins. Each subsequent bell, that appears during the bonus game, awards another free spin. During the bonus, each family member has a special skill designed to help the player win big. If three or more Sams appear, he goes wild and replaces once symbol with a sticky wild. Three Maggies will cause her to electrify all symbols for a new chance at some big wins. Sandra will sip away at her cocktail and award you with generous multipliers of up to 10x if you spin three or more of her symbols. These nice characters are working hard to transcend troll stereotypes, it is concerning however that Sandra’s drink is garnished with a poor little snail, who doesn’t look like he has come to terms with the fact that he will die without ever really taking any risks. The bonus game ends after all free spins are used.

Watch a Video Preview Below

Conclusion – Electrifying Multipliers and Many Ways to Win

ELK Studios has produced a decent slot, with a unique troll theme that sidesteps typical fantasy tropes, instead choosing to focus on the modern-day troll. One that is less carnivorous, one who just wants to work hard and have enough free time with his/her family. The game has 243 ways to win, and similar to most slots with similar paylines, the payouts tend to be on the smaller side. The largest payouts are available to whomever the bell “trolls”. Once in the bonus game, multipliers and wilds quickly add up to some shocking payouts. With an RTP of 96%, Electric Sam gave us many reasons to play. Like most slots from this developer, players can choose from a few unique betting strategies to make the gaming experience as optimal as possible. Did you enjoy the game? Let us know your thoughts in the comment section below.