Football, also known as soccer in some countries, is arguably the most popular sport game that cuts across every region around the world. Endorphina Gaming brings the sport we love to us in this video slot game with fascinating and unique features. Follow our Football slot review for detailed analysis of this game and all it has to offer.

To be a part of the action, play this game at our top pick casino BetVictor for January 2021 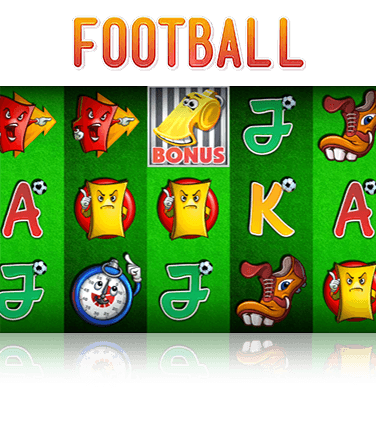 Many slot games with a football theme are available online, but Endorphina Gaming has done a fantastic job with the design and soundtrack of this video slot game, which conforms with the game’s theme.

The Football online slot game is structured on five reels and three rows with a football field in the grid’s background. The game has simple gameplay with some fascinating symbols and features that help players to earn decent wins. There are scatters, wilds, and 21 paylines available in the game that makes it fun to play.

You can earn a win by landing three or more identical symbols from the leftmost reel to the right along any of the active paylines on the 5×3 grid of this game. The game is a penny, and high limit slot game where casual players can bet with as little as 0.01 Euros and high-stakes players can bet with as much as 210 Euros to get winnings.

The features available in this game include; a gamble feature grid which significantly increases player’s winnings, a wild feature that substitutes symbols and also double winnings, a standard scatter symbol that earns free spins, and two regular symbols that act as scatters to pay out generous prizes.

Regular items present on the field during a football game are used as symbols in this slot game. There are 11 symbols which include the standard paying symbols, the wild symbol, and the scatter symbols. The standard paying symbols from the highest to the lowest include a golden ball, a soccer boot, Gloves, Stopwatch, Red card, Yellow card, A, K, Q, and J.

The highest paying standard symbol, the golden ball, acts as the wild symbol in the game, and it also doubles winnings. A yellow whistle serves as the scatter symbol. Moreover, the red and yellow card symbols act as a scatter when 5-of-a-kind lands anywhere on the reels to award prizes.

Excesses Free Spin at every Whistle

Another interesting addition to this game is landing five-of-a-kind red or yellow card symbols, which act as scatters and pays out prizes. The regular golden ball symbol also acts as wilds, substituting for any symbols except the scatter symbol and doubles winnings.

In the Gamble /Risk feature of this game, you can decide to take a chance of doubling your winnings up to ten times. You choose one of the face-down cards on the football field.  If you win, you can keep playing until the tenth game. But if you lose the game, you lose all your winnings for the previous spin.

The feature that would have made this game even more appealing to many slot enthusiasts is a progressive jackpot. But sadly, the game does not feature a progressive jackpot, and this is usually a must-have requirement for some players before playing a slot game. It is worth mentioning that even with this deficit Football slot machine still rewards players with other features and its winning combinations.

You would be in error not to try out this game because even though there is no progressive jackpot, you can still earn decent winnings in the base game. Plus, Endorphina may decide to feature a progressive jackpot in future updates of the game.

And The Team Come to Play

Where better to Enjoy than Mobile

Endorphina Gaming is one of the most outstanding slot game developers in the gaming industry as they produce incredible games with beautiful graphic designs. This game is available to be played on mobile devices, and it would not come as a surprise to you that the graphic design on the mobile is just as stunning as what you will find on the desktop. The only difference between the mobile and the desktop versions of this game is that the interface is arranged differently.

Rewards on and off the Pitch

Although we can’t explicitly determine the game’s variance at the moment, it has a good hit average that allows players to get wins enough times to worth risking money to play the game which can be attributed to Football slot RTP higher than other Slots.

The base Football RTP ratio of 96% is quite nice, while the Risk/Gamble game has an RTP ratio of 84%. And as a spin till you win slot game, there is no specific strategy that can be used to get wins in this game. But you can make use of the risk game feature to potentially increase your winning up to ten times the initial price.

Endorphina uses the football sports theme to produce this fascinating game that both football and non-football fans love. There are many slot games designed with a similar theme to this game across many casinos online.

As covered in this Football slot review, a huge flaw in the Football lot game is that even though it has exciting features that can help players increase their winnings, players’ potential payouts are a little low compared to other slot games. But the game has free spins and a decent RTP ratio that makes it worth playing.

The game is fun and exciting with the simple design and background stadium chants and noise that gives you a football environment vibe. So, try out the game, and please don’t forget to share your experience with us in our comment section.