4 of a King – Vintage Fun with a Royal Touch

The feeling of playing in a real-life casino, even while playing online is not something you come across regularly. Despite the avalanche of online slots available today, not many are able to invoke the feel-good feeling of playing in a casino. This intricate combination of video slot and gambling offers the opportunity to win up to 1000x of the stake or a €10,000 jackpot. 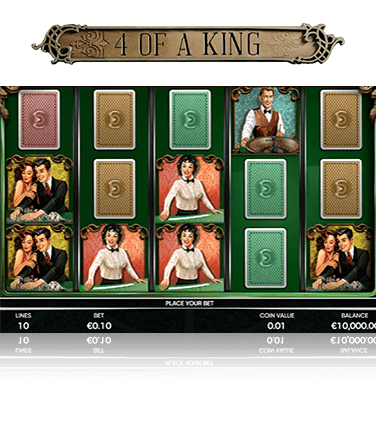 Real Money Casinos with 4 of a King

4 of a King is a video slot game produced by Endorphina. This Czech company has fast built a reputation and solidified their place as one of the best premium slot game software developers in the world. Their attention to detail is top-notch, and they have upped the ante in terms of combining nice graphics with background music, and this has made their software a player’s delight. Rock n roll sounds played on a piano as well as male and female dealers provides a real-life touch to the gameplay.

4 of a King slot is built with a simple and straightforward design. The game is mostly composed of playing cards, male and female dealers and the chips which represent the winnings of the players. A winning combination results when 3 or more combination of a kind is recorded on an active payline.

This slot is infused with approximately 5 reels and 10 paylines which pay left to right and right to left (Both ways). A red chip plays the role of the wild symbol, and part of its functionality is that it can replace other symbols on the screen. It can also move to different positions during gameplay just to complete win combinations. There is no progressive jackpot, bonus game, scatter symbol or free spins in this game.

The Spin button on the game when pressed will set the reels spinning. An auto functionality is built within which lets the player allow the game to take the wheel and keep the reel in motion. Interestingly, the game pays from left to right and right to left, which makes winning a lot easier.

The symbols pay differently, but the Roulette dealer and the female dealer are two of the highest paying symbols in this game. Anytime five of them comes up on the reels, then a prize of 2500x will be won. The maximum win is 10,000x depending on the amount that was staked on the game.

The symbol with the highest winning potential is the winning couple, and 5 combinations of them will attract a reward of 5000, which is double of what is offered for the roulette dealer and female dealer. The betting range is€0.01 – €100.00; this implies that winning can potentially reach a ceiling of €100,000 if the amount staked is €100, which is also the maximum stake.

Rewards on and off the Table

There are no free spin or bonus game features provided within 4 of a King slot machine. There is a gamble feature which allows winners to “Risk” their winnings for double the amount. The risk could be accepted or rejected.

If accepted, 5 downward facing cards will be shown within which the player is expected to choose one of the card picked is of a higher value than what was chosen by the computer, and then another win is recorded. If the player selects a lower card than the computer, then it is a loss. Alternatively, the player can just click on the “Take win” tab.

The Only Flaw in this Kingdom

This game can be enjoyed both on desktop and mobile devices. Although it is recommended that it be played via a desktop device specially to maximize the vintage casino like the theme of the game. Surely the lack of a progressive jackpot can be a serious turn off for many players, but it is advisable players constantly be on the lookout as one might be included in the game in the nearest future.

Lets go All In

No Restriction to the Reign of these Kings

This game, unfortunately, is not compatible with mobile devices but only on desktop. This is not necessarily a bad outcome as it affords you to enjoy the splendour of the game from the comforts of a bigger screen with high resolution and top-notch animated graphic. If you must enjoy the feel-good atmosphere of a real-life casino, then you would likely want to try out the desktop version even if there were a mobile app anyways.

The developers keep updating the game, so there might be a future mobile version. Be sure to keep in touch with 4 of a King slot review for more future updates.

True Rewards of a King

With a medium variance game and 4 of a King RTP score fixed at 96% which is just about a regular score for casino slots. 4 of a King slot RTP rate of 96% gets bandied around a lot in many slot reviews, but it is noteworthy that the implication of this is that a payout of €96 is feasible for an average of €100 staked and the balance of 4% is apportioned for the house edge. Medium variance games come attached with small max bets, and this could explain why the max bet allowed for 4 of a King is €100. Hopefully, by playing smaller amounts, you can increase your chances of winning big in the long run.

4 of a King slot was released in 2014. It is one in a lone line of games built with a 10 payline structure produced by the same company. Other slot games like Gems and Stones, The King, Shaman, Slotomoji, Diamond Vapor all released by Endorphina all carry similar structure. All these games share similar feature and layout as 4 of a King online slot and rewards equally or even more.

Sometimes simplicity is a great determinant for acceptability of a game and as you can see from our 4 of a King slot review that is what this slot embodies. The green background, live dealers and the music blaring in the background of this game is a plus. The jackpot of €100,000 is also a great motivation factor, and although, the game will probably be better if it comes with free spins.

The absence of a scatter symbol and multipliers is also a downside to this game. This could bolster the gambling credentials of the game and stimulate the interest of more players to try out the game.