We know what you’re thinking. You’re thi…actually, we have no idea what you’re thinking. You’ve come to read a review of a slot game about unicorns with machine guns, and that makes your current state of mind highly unpredictable. After giving this one a blast, we can say that it’s what you might, possibly, expect it to be. It does exactly what it says on the tin, and it’s an enjoyable ride. We also know you’ll be itching to see what on Earth is going on, so we’ve provided a free demo version for you to play.

To vanquish your thirst for zombie-popping and magical unicorns with automatic weapons on their nozzles, and to simultaneously play for real money, head to BetVictor, the number one casino for April 2021. 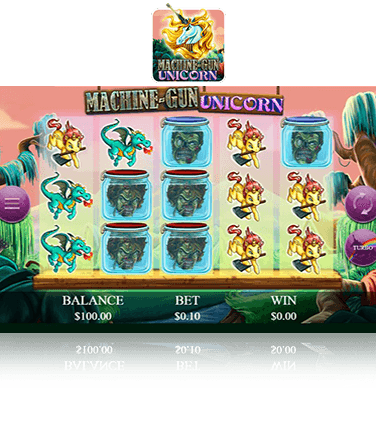 Real Money Casinos Where You Can Play Machine Gun Unicorn

Once upon a time in a beautiful land, magical ponies came under threat from zombies and needed the help of a machine gun unicorn to save them, so the story goes. The protagonist appears only on the third reel, and acts as a wild, destroying any zombie heads that appear in the 3×5 grid with a blast from the ridiculous, face-mounted weapon. Meanwhile, there are ten fixed paylines, paying both ways in this ludicrous imagination, the brainchild of a warped and possibly inebriated mind. Oh, to have been a fly on the wall at Genesis Gaming when they pitched this potty product. Poisoned pipes? Disgruntled and rebellious game designers? A stubborn and unhinged CEO? For whatever series of events led to the creation of this game, we’d like to extend our thanks. While there’s no bonus round to speak of, the decent return to player rate and fast and rampaging gameplay make it worth playing for even the most musty and humourless of punters.

Conclusion – You Won’t Know What Hit You

If you’ve played a game featuring a zombie apocalypse and machine gun unicorns before, then this experience will be nothing new for you. There’s not much point in you reading on. Still here? We thought so. To sum this game up succinctly – is very difficult. It begins with an introduction to the preposterous plight of the unicorns, and it ends with you laughing like a drain. The melding of a metal soundtrack and My Little Pony graphics provides the eclectic amalgamation of madness to melt your mind. Winning big in this game results in a body count that Rambo would be proud of, and a chance to avert the terrifying possibility of an army of marauding Zombicorns. If you have your own thoughts on this titillating title, it’s time to tell us using the box below.