Lucky Larry’s Lobstermania 2 – A Netful of Jackpots and Bonuses

Who is Larry and why is he so lucky? A self-obsessed lobster with a mania for his own kind? Or a fisherman rendering Moby Dick lobster edition? All the answers to these and more in our review and demo version where you can play the game for free!

Want to trawl the seas for real money? Then set sail to BGO – the casino with the hottest offers for January 2021! 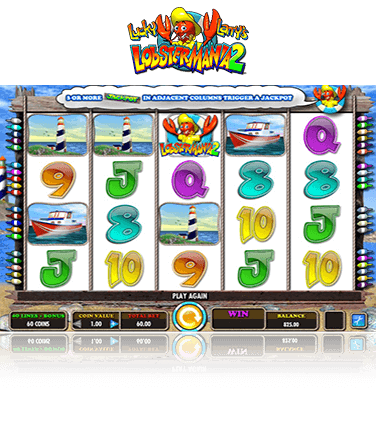 A Boatful of Rewards as Larry’s Adventure Continues

No, seriously – think about it. If Larry is the lobster why is he all smiles when he is red, which would mean he’s already been boiled? Anyway, to get to the important part – the rewards and the bonuses. Plenty of those for you, so you’ll definitely be experiencing tug of the line excitement. The high-paying symbols you will be hoping to bite the bait include a buoy, a lighthouse, a boathouse, and a fishing boat. The low-paying ones are the eight to King playing card symbols, no ace. But you have all chances of acing this game if you get one of the two blue and yellow Lobster Mania logos – both are wild and can replace other symbols to boost your winnings. A random Jackpot symbol may appear over these and that’s when you’ll be having your own “It was this big” moment, as hitting five of those could net you a Mother Load of 50,000!

Get a Glimpse at Larry’s Adventures in Our Video Review!

Larry is Back for More Fun and Prizes!

Just like the original Lucky Larry’s Lobstermania, this slot is a 5 reel, 40 payline game telling the story of Larry, our favorite fisherman and his endeavours of netting a lobster. The tropical theme, nautical symbols, and Larry’s accent that made his first attempts a hit and a bit of a comedy are still here while the quirkiness, bonuses, and graphics have been enhanced. Now you have again the Buoy Bonus, plus a Free Spins round and a progressive jackpot feature for even bigger chances of winning and the same fun mood.

Plenty of Bonuses and Free Spins

It’s easy to see why the game was a hit in land casinos and why the original version was so successful that it had to have a sequel. And it’s not exactly the graphics or music, although they’re pretty decent. It’s the bonus features, which are in bulk in Lucky Larry’s Lobstermania 2! Plenty of fish in the sea but just one lobster to get you the big winnings. If you happen to catch 2 or 3 lobsters dressed in yellow, you can choose to play the special bonus game Lucky Larry’s Buoy Bonus 2 for chances of multiplying up to x1,000 your winnings, or The Lucky Lobster’s Free Spins Bonus where you will be granted five free spins on enhanced reels. If you have more luck than a red lobster, you can retrigger the free spins to get yourself a whopping 240 spins. Wait, so Larry isn’t the lobster, that’s why they have separate bonus games. Mystery solved. Told you you’d get all the answers to your questions. Now, go ahead and leave a comment in the section below if there’s something else that’s bothering you or if you just want to express you opinion on the game.