Everyone knows these stupid, exploitative slots that feature half-naked women meant to arouse the player, for some reason. Well, this is the male equivalent of that… Question is, can it do more than get me hot and bothered? 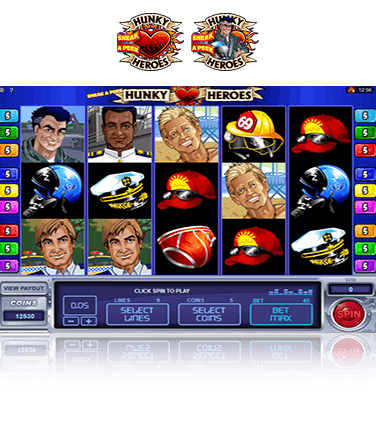 You know, on the surface, I should REALLY hate this slot. And why not? It’s shameless, exploitative, not aimed at me at all, and obviously hoping to mask its lack of feature by putting some hot guys on its reels, right? Except… That’s not really true at all. Oh, don’t get me wrong, it’s about as shameless and exploitative as any other slot of this nature, except rather than being embarrassed about it, this one embraces its sexualized nature. If you check out the symbol descriptions, you’ll be faced with a myriad of sexual puns talking about how the fireman’s really good with his hose, or how the policeman takes undercover work seriously. It’s hilarious, and serves to put you in the right mood! As for bonus features, well, those are just as plentiful. There are several bonuses in the game, the primary of which is the Package Bonus (yes, really – three guesses what the symbol depicting it is). When triggered, it allows you to select one of the gentlemen’s packages, which will grant you up to 7 free spins at a 3x multiplier – both of which you can further increase by getting certain symbols. Another bonus game you can get is the Sneak Peek bonus, where you’ll be allowed to “scratch off” certain areas of a ticket (different for each of the five hunks) and reveal a prize based on what you’re able to uncover.

Let’s face the facts, people – this slot wasn’t intended for straight guys (which, as far as I can tell, is a pretty big demographic among slot fans). It’s very obviously and shamelessly marketed towards people with a healthy appreciation for a good set of abs, and, to its credit, it does so pretty well! The descriptions are hilarious, the symbols are pretty well drawn, and the bonuses are fun, unique and really interesting to play. If the subject matter was different, I wouldn’t have had any problem recommending this slot to everyone… But then again, part of its charm is precisely the shameless double entendres scattered about its menus. The slot knows EXACTLY what it is and what it’s supposed to be, and at the end of the day, I can’t really fault it for that.