Arcane Reel Chaos – Can You Defeat the Evil Deep Pockets?

Are you a fan of superheroes, as well as online slots? If so, you should love this fantastic slot from NetEnt. Set in a city under siege from the evil Deep Pockets, you’ll need to help four intrepid superheroes to take him down. Along the way, you’ll have the chance to spin in some massive prizes, plus you could start one of the four bonus games, or even the free spins feature. We’ve got a free version of the game on this page, so why not see how much you enjoy this great slot?

Already know that you want to play this slot for real money? If so, you should head over to Grand Ivy, our top online casino for January 2021! 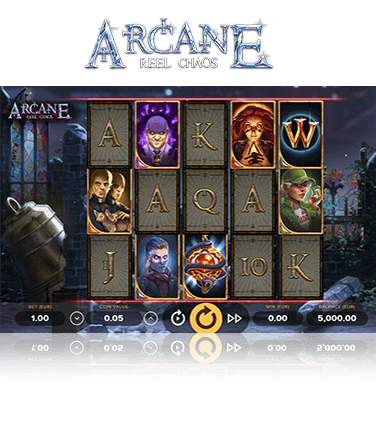 Arcane Reel Chaos brings adventure on every spin. Just spin the reels and see if you can win a prize – the most you can win per payline is a massive 1,000x your payline bet, which equates to £10,000 when playing at the highest stakes. Even if you don’t hit the jackpot, you’ll still have the chance to hit some other substantial prizes every time you play.

You’ll find four different bonus features at this slot, all of which activate randomly. Each bonus is based on a superhero and can be anything from a multiplier through to re-spins. You’ll also regularly see a wild symbol spin into view, which could help you to create some juicy winning combinations.

There’s also a fantastic free spins feature, where you’ll get to battle the evil Deep Pockets and attempt to save the city. Defeat him and you’ll find a huge prize heading your way. In fact, the free spins, as well as the bonus features, can bring even larger prizes than the base game.

This is a standard slot with five reels and three rows, and spread across the reels you’ll find 20 paylines. These are fixed paylines, so you won’t be able to alter the number of them. Winning combinations pay from left to right. To win a prize, get three or more identical symbols on a payline and on consecutive reels, with the first symbol in the combination being on the first reel.

The minimum that can be bet is £0.20, which equates to £0.01 per payline. The maximum bet is a massive £200, or £10 per payline. The prizes shown on the paytable are multiplied by your bet per payline, and not by the overall bet, as is the case at some other slots.

Deep Pockets, the evil mastermind featured in the purple symbol, is the highest paying symbol at this slot. Get five of this symbol along a payline and you’ll win 1,000x your bet per payline, which could be worth thousands. All four of the superheroes are also high-paying symbols, so you’ll want to see all characters on the reels as often as possible.

The wild symbol is a standard one and appears on all reels except the first. The snake wrapped around the pendant is the scatter symbol and getting three of them on reels one, three and five will start the free spins round, where you’ll get to battle Deep Pockets.

If you’re a fan of bonus features, you’ll absolutely love playing Arcane Reel Chaos, as there are loads of them. In fact, every superhero has a bonus feature. The first of these is called Psyop’s Stacked Wilds and it can activate on any spin. While the reels are spinning, two or three reels will be covered by stacked wilds, which can see some huge winning combinations being made.

Then there is Zero.X’s Overlay Wilds. This bonus can also activate during any spin and sees three, four or five wild symbols placed randomly on the reels.

Flare’s Multiplier is the next bonus, and this can be randomly activated after any winning spin. When it activates, you’ll find a 3x, 4x or 5x multiplier being applied to your win.

The last superhero bonus is Chrono’s Re-Spin. This can happen after any non-winning spin and sees the reels spin again. They will continue re-spinning until a winning combination is made. Every time a re-spin doesn’t manage to create a winning combination, the multiplier applied to the eventual win increases by one. It is possible to get up to a 10x multiplier during this bonus.

The main feature of this slot is the free spins bonus though, and this starts when you get three scatter symbols on reels one, three and five. The superheroes will now fight Deep Pockets over a maximum of four stages. Deep Pockets will start with different amounts of health points, and you need to reduce them to zero. Do so and you’ll move onto the next stage. Each stage also has a multiplier, which can lead to big prizes. What’s more, beat Deep Pockets on the final stage and you’ll win the Victory Bonus.

Arcane Reel Chaos works perfectly on all modern mobile devices, including smartphones and tablets running on the Android and iOS operating systems. There are two ways to play. Most will choose to load the game in their mobile browser. There are some sites that include this game within their mobile app though.

Regardless of whether you play via a browser or an app, you’ll find that this game runs smoothly, providing you have a reasonably good internet connection. Prizes are the same as the desktop game, plus the various bonuses are also exactly the same. Overall, NetEnt have optimised this game perfectly for mobile play, but what else would you expect from this superb software provider?

This slot is perfect if you’re looking for a game with high variance. You’ll often go a while without winning a prize at this slot, but when one does arrive, it can be absolutely massive. This means that your account balance can go up and down sharply as you play, unlike with low variance slots, which keep your account reasonably stable with lots of smaller wins.

One of the most impressive parts of this slot is the RTP, as it is 96.81%. This means that, on average, the game will pay back 96.81% of the money spent on it. Of course, if someone wins the jackpot though, many others will have to lose money to balance things up.

If you’re looking for a way to increase your odds of winning, then you’ll be disappointed. This is because Arcane Reel Chaos, like the majority of other video slots, is based entirely on luck, and there’s nothing you can do to boost your chances of winning. So, just enjoy yourself and hope you’re lucky enough to win a big prize!

Arcane Reel Chaos is one of the most exciting slot machines you’ll find anywhere online. This is thanks to the four different bonuses, as well as the exceptionally exciting free spins round. The fact that such large prizes can be won, especially during the bonuses and free spins, also adds to the excitement you’ll feel when playing this slot. Both the desktop and mobile games are equally as good, meaning it really doesn’t matter how you decide to play.

We love this online slot machine and recommend that everyone plays it. Why not spin its reels today and then tell us what you think in the comments section below?

up to £1,500 + 100 Spins on StarburstOur casino suggestion for Arcane Reel Chaos
Overall Rating 9.7/10.0 Play here!
Full T&Cs apply. 18+. New players only. One bonus offer per player. Minimum deposit £20, max bonus bet is £5, bonus spins on selected games only and must be used within 72 hours. Bonus funds must be used within 30 days otherwise any unused bonus shall be removed. Bonus funds are 100% match up to £300 on your 1st deposit, 25% match up to £800 on your 2nd deposit, and 50% match up to £400 on your 3rd deposit. Bonus funds are separate to cash funds and are subject to 35x wagering the total bonus, cash & bonus spins. www.begambleaware.org.
NetEntAll 188 NetEnt slots at a glance
Popular Blog Posts
QuickspinAll 20 Quickspin slots at a glance
BetsoftAll 15 Betsoft slots at a glance
Home > Netent > Arcane Reel Chaos