Finn and the Swirly Spin – A Unique Trip to Ireland

There are no reels in this innovative NetEnt slot. The magic leprechaun Finn takes you on a trip in the world of Celtic magic, with a mug of beer in hand of course! You can check the fully animated bonus features below in our free online demo play.

If you want to spin this slot for real money, you can do so at Grand Ivy, our recommended casino for July 2021. 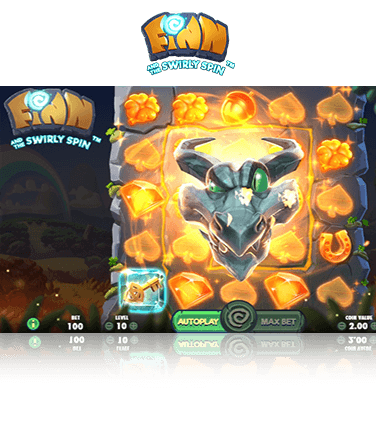 Real Money Casinos with Finn and the Swirly Spin

Full Overview of the Rules and Features

Finn and the Swirly Spin is an unconventional game, because all the 25 symbols from the spin are generated independently from each other and appear in a ‘swirly’ pattern on the magic stone. Wins are awarded when three or more symbols form a straight vertical or horizontal line. This means that the slot has a total of 10 fixed paylines – however, each time a winning combination appears, the symbols in it explode, and new ones replace them. In addition, after each explosion, a Wild will be generated in the middle of the freed space. Wilds substitute for all other paying symbols, also explode when they are part of a winning combination, but also remove all the neighbouring symbols. The game includes several random bonus features: Starfall Wilds, Dragon Destroy, Irish Luck and Magic Transform. They trigger randomly after the initial spin, rearranging the symbols or adding wilds if you’ve scored no win. Each round of the game also features a Free Spin Key – a special symbol that is always the last to appear. It moves towards the center with each avalanche following a winning combination. If the key reaches the center, you are rewarded with free spins, and a point for the special Key Meter. The points you collect in this way are not lost between your play sessions, and can be used to unlock more beneficial free spin rounds as you progress in the game.

Video Preview of the Game

Finn and the Swirly Spin breaks the usual mould for slot games, and the result is a rather pleasant surprise – though with NetEnt, this is not totally unexpected. The payouts are relatively smaller, as has been the trend in most new games, but this is offset by the Avalanche mechanic which is equivalent to a partial re-spin, and the large number of bonus features that can be triggered. All of this makes the game rather unpredictable and full of surprises, so you should prepare for a wild ride with it. We’re looking forward to hearing about your Celtic experience in the comments below!

up to £1,500 + 100 Spins on StarburstOur casino suggestion for Finn and the Swirly Spin
Overall Rating 9.7/10.0 Play here!
Full T&Cs apply. 18+. New players only. One bonus offer per player. Minimum deposit £20, max bonus bet is £5, bonus spins on selected games only and must be used within 72 hours. Bonus funds must be used within 30 days otherwise any unused bonus shall be removed. Bonus funds are 100% match up to £300 on your 1st deposit, 25% match up to £800 on your 2nd deposit, and 50% match up to £400 on your 3rd deposit. Bonus funds are separate to cash funds and are subject to 35x wagering the total bonus, cash & bonus spins. www.begambleaware.org.
NetEntAll 188 NetEnt slots at a glance
Popular Blog Posts
PlaytechAll 189 Playtech slots at a glance
IGTAll 89 IGT slots at a glance
Home > Netent > Finn and the Swirly Spin