This NetEnt slot game is one of the best Irish-themed slots today. The adventure starts in a tavern, where a red-haired lad embarks on a treasure hunt for gold coins and ale. The game features a 5×5 grid and uses NetEnt’s famous Cluster Pays mechanic to track wins.

If you’re feeling lucky, go and try your luck with real money at Grand Ivy this month of January 2021. 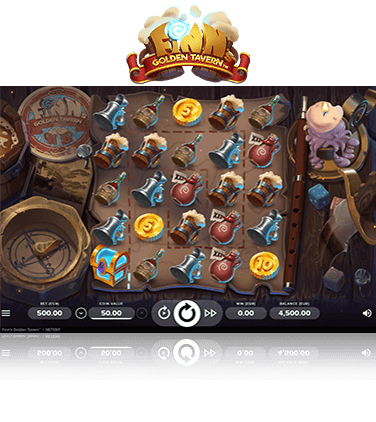 Treasure Chests and Jugs of Ale

This NetEnt slot game is the sequel to another Irish-themed slot featuring the same flame-haired protagonist. Finn’s Golden Tavern takes place in a local Irish tavern where the adventure begins as the lucky leprechaun uncovers treasures and jugs of ale.

As you enter the game, you’ll see a tabletop with a 5×5 grid laid on a treasure map. An ‘x’ marks the centre of the screen, while dotted lines radiate in a rectangular spiral fashion towards the middle. These dotted lines light up every time you get a winning combination, and consecutive matches will lead the light towards the x to unlock the treasure. However, it resets when you re-spin. Expect to see gold coins, silver bottles, wooden tankards, jugs of ale, and treasure chests in every spin. Each winning line unlocks a one-eyed star pirate.

When it comes to keeping track of wins and paylines, players don’t have anything to worry about, as the game makes use of NetEnt’s Cluster Pays mechanic. This feature keeps track of your wins each time you get winning combinations. The minimum bet for this game is 0.1 Euros (0.01 coins), while the maximum is 500 Euros (50.00 coins).

There are no paylines to keep track of in this game because it is a cluster-pay game, and as long as you get three or more matching symbols, whether vertically or horizontally, the game’s system will record your win. The more symbols you match together, the better chances of winning higher amounts. This slot game can yield up to a 1000x payout.

There are many eye-catching elements in this game, including the different symbols. There are nine high-paying symbols, which include the following:

Apart from the regular symbols, Finn’s Golden Tavern has special symbols that unlock bonus features and rounds. These are the Free Spins Chest Symbol and Wild Symbol (one-eyed star pirate). Players can unlock the latter using the Avalanche feature – this feature allows symbols to move closer to the x.

Theoretically, a player can win up to 500,000 coins in this exciting slot game. A 500-coin bet can yield massive earnings with a 1000x stake.

A Preview of the Action at Finn’s Tavern

Finn’s Golden Tavern slot game is available on mobile, but your device should be online for the game to work. The mobile version has the same quality, especially when it comes to graphics and speed. An app download is unnecessary, and the game is compatible with any mobile browser, whether you’re an iOS or an Android user.

When it comes to gameplay or interface, there’s not much difference, except that you can play the mobile version on a smaller screen. Despite this, image quality and definition remain identical to that of the desktop version. The game is also free to play, so you can access this fun-filled slot game wherever and whenever you please.

This NetEnt slot game has a 96.10% RTP – a decent rate that can offer huge winnings. It has a low variance, and medium to high volatility.

This slot game is easy and pretty straightforward to play. Here are some tips to make the experience even more enjoyable and stress-free:

Finn’s Golden Tavern is the sequel to another slot game featuring Finn and his other adventures. The slot, released in 2017, is called Finn and the Swirly Spin. This game is also a 5×5 slot from software developer NetEnt that takes us on a journey in the Emerald Isles. This game features the same spiral reels similar to the one found on this slot’s treasure map.

This game offers a mystical adventure filled with dragons, magical elements, and more. It is an immersive gaming experience similar to the type of gameplay provided by this slot game.

Conclusion – Drunk on Lots of Ale and Lucky Spins

Finn’s Golden Tavern is a fun and exciting slot game that keeps on giving as the game progresses. The avalanche feature keeps things thrilling, and the amusing graphics and sounds make the experience even more entertaining.

I think the cluster-pay feature is much better than having to think about paylines. The Cluster Mechanic technology created by NetEnt makes playing this slot game a breeze. All you have to do is click the spin button and wait for your winning moment.

Overall, the game is of extremely high quality. There are no glitches while playing on either the desktop or mobile version. It’s the type of slot game that you’ll keep playing to keep boredom at bay.

Have you tried playing this slot game? What did you think of the game’s unique features? Do you think there are aspects of this game that needs some improvement? Feel free to share your experiences with slot game, below.

up to £1,500 + 100 Spins on StarburstOur casino suggestion for Finns Golden Tavern
Overall Rating 9.7/10.0 Play here!
Full T&Cs apply. 18+. New players only. One bonus offer per player. Minimum deposit £20, max bonus bet is £5, bonus spins on selected games only and must be used within 72 hours. Bonus funds must be used within 30 days otherwise any unused bonus shall be removed. Bonus funds are 100% match up to £300 on your 1st deposit, 25% match up to £800 on your 2nd deposit, and 50% match up to £400 on your 3rd deposit. Bonus funds are separate to cash funds and are subject to 35x wagering the total bonus, cash & bonus spins. www.begambleaware.org.
NetEntAll 188 NetEnt slots at a glance
Popular Blog Posts
ThunderkickAll 20 Thunderkick slots at a glance
BetsoftAll 15 Betsoft slots at a glance
Home > Netent > Finn’s Golden Tavern