Who missed the 80s? If you weren’t there, it was bloody excellent. People talked to each other and played video games in front of the same TV in the same room. Films were funny and creative and didn’t try to sell you anything. Music was mega. It’s these sentiments that developer Thunderkick has bundled into a package of nostalgia in the Flame Busters slot starring Roasty McFry and his fire-busting buddies.

Want to try this one for real money? Go to 777 Casino, which is our top choice for playing this slot in March 2021. 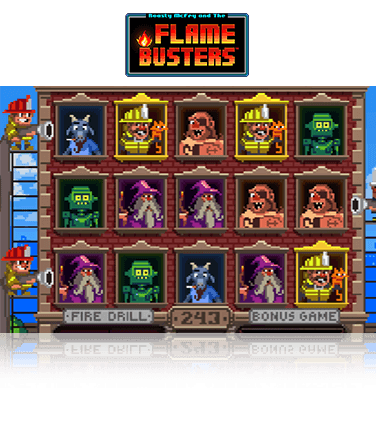 Thunderkick’s Flame Busters is one of those 243 paylines to win games, meaning that three or more symbols of the same type placed from left to right anywhere on the reels provides a win. As with all slots with a lot of ways to win, compromise has to be made somewhere. When you play these games, you tend to win small, and that is true of this one. The art-style is reminiscent of the 16-bit home console era of the late 80s to early 90s. Think Super Nintendo and you’re pretty much there. The soundtrack is suitably retro as well, which is nice. There’s also a nice bonus round package in this game. Landing three or more bonus bell scatter symbols will trigger a free spins round. If you manage to land three more bells in total during the free spins, Roasty McFry and his mates will extinguish all of the flame-filled windows on the screen and move up to the next floor of the building. Each time you do this, you remove one of the symbols from the game, increasing the odds of landing more wins. It’s a gamified approach that will please fans who are here for the retro video game styling.

Conclusion – One For the Nostalgia Junkies

Flame Busters is a fun little game with loads of nods to old-school gaming, film, and popular culture. The gameplay is a bit, meh, with not much going on outside of the ordinary, but the 16-bit soundtrack kept us interested for long enough to get onto the bonus game. Once you get there, the free spins round has a levelling system that looks promising, until you realise that all the levels are essentially identical with one symbol removed. Still, there are worse games out there. Let us know what you think in the comments below.