Golden Grimoire – Lose Yourself in an Ancient Realm

Net Entertainment is renowned for its immersive mystical slots, and this just happens to be one of the very best. Set in a mystical ancient realm and boasting a raft of mystery symbols across its five reels, there are also 40 fixed paylines and a unique ‘Mystery Symbol’ feature!

If you’re going to play this slot for real money, Grand Ivy is the very best place to visit this January 2021. 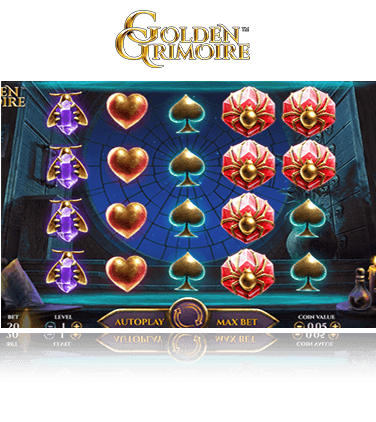 Introducing the Slot’s Rules and Features

The game adopts a classic reel-grid structure, complete with five reels, five rows and a total of 40 fixed paylines.

These run from left to right, with paylines appearing in straight lines and a vast array of horizontal combinations. Only the highest win per bet line is paid at the conclusion of each spin, while you can land up to five matching icons on an individual payline.

The highest paying payline is forged by landing five of the red gem and spider icons on a payline, with this rewarding you with 100x your stake level. This is a relatively small jackpot prize, but you can compensate for this with a relatively high frequency of base game wins.

Despite the relatively low base game payouts, you can access a wide betting range on Golden Grimoire. More specifically, the coin range stretches from 0.20 to 400.00, creating a maximum bet level of £400 per individual spin!

This doesn’t quite correlate with a top base game prize of 100x your stake, and as a predominently low-variance slot it’s probably wise for bettors to avoid wagering at high levels or deploying the ‘Max Bet’ option in most instances.

As with most Net Entertainment slots, you can can also deploy the ‘Autoplay’ feature to automate a predetermined number of spins at a fixed bet level. You can automate 10, 25, 50, 75 or 100 spins depending on your betting stratey and preferred pace of gameplay, while it’s possible to cancel this sequence at any time.

There are 11 symbols featured on the slot’s 5×5 reel grid, eight of which payout a viable return. The four lowest paying icons are depicted by playing card suites, and landing five of the ‘Hearts’ symbol on a single payline will trigger a 20x multiplier on your stake.

As we’ve already touched on, the highest paying base game symbol is the depiction of a red gem being gripped by a spider, and you can earn 10, 30 and 100x your stake when you match 3, 4 or 5 of these icons on a single payline.

There are also three special icons, including the ‘Mystery Symbol’ which appears on reels 3, 4 and 5 during the base game and inspires a serious of transformations that build new and unexpected winning combinations. There’s also wild and scatter symbols, the latter of which can be found in reels 1,3 and 5 and can trigger 8 the award of 8 free spins.

Does the Slot Have any Bonus Features?

While it can be hard to distinguish the slot’s primary bonus features, one that really catches the eye is the so-called ‘Mystery Symbol’ feature. Depicted by a spellbook, landing one or more of these on reels 3, 4 or 5 will initiate the selection of a random symbol (including the wild), before the visible Mystery Symbols transform into the chosen icon to forge a new winning combination.

This can lead to some relatively healthy wins, particularly if the Mystery Symbol transforms into the wild. This can also cause all symbols on reels 2 and 4 to become wild, potentially filling the reel grid and triggering the game’s top overall payout of 200x your stake.

There’s also a Free Spins feature, which is triggered when you land three scatter symbols on reels 1, 3 or 5 simultaneously. This will reward you with 8 free spins, while you can also unlock Sticky Mystery Symbols to secure recurring wins.

Can You Play Golden Grimoire on Your Mobile?

Like the vast majority of Net Entertainment slots, Golden Grimoire has been designed using HTML5 technology and adapts seamlessly to different screen sizes. This means that you can play using a mobile or tablet device (as well as a desktop), both through native casino apps and mobile browsers.

The slot has been primarily optimised for the Safari mobile browser, which is widely used on all iOS devices. However, it also works seamlessly on Android devices, so you can enjoy the slot no matter what type of device you have.

From a graphic perspective, the slot also works relatively well on a mobile device. This is largely thanks to the simplicity of the game’s graphics, with the symbols bright and colourful but not defined by a complex design.

Do You Have any Tips When Playing the Slot?

This game has a competitive return-to-player (RTP) rate of 96.44%, which is typical of low-variance gameplay that delivers regular (but relatively small) base game returns.

This is also reflected by a maximum base game payout of 100x your stake, which is noticably small in the modern slot gaming market. Even in instances when you pack the reel grid full of wilds during the Mystery Symbol feature, you can only earn a maximum of 200x your stake, and this is unlikely to appeal to high-rollers or serious gamblers.

With this in mind, we’d only recommend playing this if you have a risk-averse approach to gaming and a relatively small bankroll, as you’re best bet is to build incremental returns over time. It’s also wise to avoid the maximum wager of £400 per spin, as the risk-reward balance doesn’t stack up when chasing comparitively small prices.

Conclusion – It’s a Kind of Magic

Slots like Golden Grimoire are becoming increasingly rare online, as they combine simple graphics and gameplay with low paying icons and frequent base game wins.

Although this is only likely to appeal to novice or casual players who enjoy bright and creatively themed games, it at least has a clear value proposition and one that doesn’t promise something that it cannot deliver.

However, the base game can become a little mundane, and while the Mystery Symbol feature alleviates this somewhat, the lack of a defined bonus round or significant cash prize is a little disappointing.

Even the free spins round lacks a little sparkle, as it cannot be retriggered once it has commenced. Still, the magical slot is undoubtedly ideal for a particular demographic of players, and if you’ve played it online we’d love to hear your thoughts in the comments box below!

up to £1,500 + 100 Spins on StarburstOur casino suggestion for Golden Grimoire
Overall Rating 9.7/10.0 Play here!
Full T&Cs apply. 18+. New players only. One bonus offer per player. Minimum deposit £20, max bonus bet is £5, bonus spins on selected games only and must be used within 72 hours. Bonus funds must be used within 30 days otherwise any unused bonus shall be removed. Bonus funds are 100% match up to £300 on your 1st deposit, 25% match up to £800 on your 2nd deposit, and 50% match up to £400 on your 3rd deposit. Bonus funds are separate to cash funds and are subject to 35x wagering the total bonus, cash & bonus spins. www.begambleaware.org.
NetEntAll 188 NetEnt slots at a glance
Popular Blog Posts
ELK StudiosAll 20 ELK Studios slots at a glance
Genesis GamingAll 15 Genesis Gaming slots at a glance
Home > Netent > Golden Grimoire