Pirate from the East – A Plundering Adventure in the Far East

This video slot is yet more proof of why NetEnt continues to be a revered entertainer across the far east. The slot promises users a plundering swashbuckling adventure featuring Japanese pirates on a quest for riches. The five-reel, three row online slot features manga inspired graphics and can be played online for free. It is a medium volatility slot with an RTP of 96.38%.

Ready to earn real money? Stand a chance of winning up to 2000 times your stake with Grand Ivy – our top choice for playing this slot in January 2021. 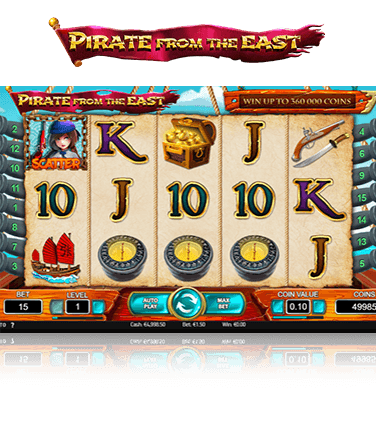 Real Money with Pirate from the East

NetEnt’s video slot, Pirates from the East, is a five-reel, three row manga-inspired game with a high volatility and an RTP of 96.38%. The Asian pirate themed slot is available on all online casino sites that offer software by NetEnt. Bright and bold symbols landing on a 3 by 5 matrix positioned against a ship’s mast welcome anyone adventerous enough to venture into the game.

The slots symbols are designed in a font that closely resembles that of a treasure map. A Japanese sake quenches your thirst in your quest to find compasses, pistols and knives, private ships, and treasure chests.

The slot has 15 fixed lines and a betting range of 0.15 to 75. You can earn up to 2000 times your total stake (max payout of 150,000) as a top jackpot for a single round. The slot also has a rich mix of features from wilds with 3x multipliers, to scatter symbols, and free spins with 6x multipliers that give users a chance to earn more.

As mentioned earlier, the slot has 15 fixed lines and wagers range between 0.15 and 75 per spin. This translates to about 0.01 to each potential combination. Wagers can be increaseed by 5 credits per line up to the maximum 75. Wins are awarded for two to five matching symbols on a line from left to right only. The game has a high volatility and has an RTP of 96.38%. pay symbols start at the low end with card royals from 10 all through to A. Hitting five symbols on a line will result in a pay of 3.33x to 4.16x your stake. An old-style sake bottle, an Asian compass, a pair of handguns and knives, and a chest of gold follow and landing five of these across the reel will lead to wins 13.33x to 133.33x your bet.

The special symbols in the slot are the one-eyed male pirate, and the female pirate wielding a hand gun. The female pirate is the scatter and at least three of them will trigger a round and pay 4x, 15x, and 100x the total stake for 3, 4, and 5 scatters respectively. Two scatters will only pay 2x the total stake, a consolation for having missed a feature trigger. The male pirate, on the other hand, is the wild. Landing the male pirate multiplies any win by 3 and together with the round multiplier, it can lead to an overall win multiplier of 15.

The golden treasure chest is the highest paying symbol and hitting a full line of gold chests would lead to a pay 2000 time the total stake. The highest possible payout is 150,000.

The slot’s bonus modes are triggered by the wild and free spin features. The male one-eyed pirate is slot’s wild symbol. It competes winning combinations with a 3x multiplier once it substitutes adjacent symbols. This works for all the symbols except the scatter.

As mentioned earlier, the slot has 5 reels, 3 rows, and 15 fixed pay lines. Wins are awarded once you land two to five matching symbols on a line from left to right only. The minimum credit per spin is 0.15 and peaks at 75. The game delivers mega wins of up to 2000 times your stake (a maximum payout of 150,000) on a single bet line.

The game has a high volatiity with an RTP of 96.38%. The male pirate is the game’s wild and multiplies any win by 3x. This together with a round multiplier can lead to an overall win multiplier of x15. The female pirate, on the other hand is the scatter. Three or more female pirate scatters will trigger a bonus round and will lead to payouts of 4x, 15x, and 100x the total stake for three, four, and five scatters respectively. Hitting a full line of golden treasure chests would lead to a pay 2000x your stake.

Conclusion – A Swashbuckling Adventure on the Far East

NetEnt’s quest to conquer the Asian market is on an upward trahectory and Pirates from the East goes to prove just yet that the Swedish gaming giants are heading towards the right direction. The game’s adapted visuals and soundtracks are just but some of the features that have been reskinned from some of their succesful slots. It remains to be seen whether the game will reach the same popularity as the originals did across the globe. Asia’s population of more than 2 billion people offer the game a huge platform for success.

Share your experience with the video slot in the comments section below.

up to £1,500 + 100 Spins on StarburstOur casino suggestion for Pirate From The East
Overall Rating 9.7/10.0 Play here!
Full T&Cs apply. 18+. New players only. One bonus offer per player. Minimum deposit £20, max bonus bet is £5, bonus spins on selected games only and must be used within 72 hours. Bonus funds must be used within 30 days otherwise any unused bonus shall be removed. Bonus funds are 100% match up to £300 on your 1st deposit, 25% match up to £800 on your 2nd deposit, and 50% match up to £400 on your 3rd deposit. Bonus funds are separate to cash funds and are subject to 35x wagering the total bonus, cash & bonus spins. www.begambleaware.org.
NetEntAll 188 NetEnt slots at a glance
Popular Blog Posts
BetsoftAll 15 Betsoft slots at a glance
PlaytechAll 189 Playtech slots at a glance
Home > Netent > Pirate from the East