Scudamore’s Super Stakes – Winning in More Ways Than One

If you love a day at the races but don’t particularly fancy leaving your home, you should definitely check out this high octane Net Entertainment slot. Packed with 20 paylines in a colourful 5×3 reel grid, the slot also features random wilds, multipliers and a lucrative Bet Slip feature!

When you’re ready to play for real money, try Grand Ivy. This is our pick for playing the slot this January 2021. 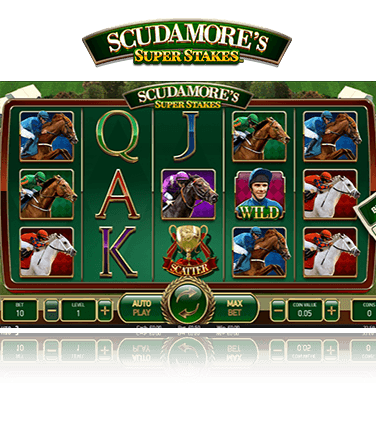 What are the Slot’s Rules and Features

As we’ve already said, this Net Entertainment video slot features a classic 5×3 reel grid, while it also adopts a fixed payline structure with up to 20 winning combinations.

These winning combinations runs from left to right across the reels, and paylines cannot be formed by matching symbols on adjacent reels, vertically or horizontally.

This action packed slot also includes the unique ‘Peter’s Classic Up’ feature, which increases the number of active paylines to 32 and a potential payout of 5000x your stake. We’ll have a little more on this later, but it definitely makes a welcome addition to the base game and increases your chances of winning significant cash prizes.

This slot offers a relatively wide betting range, as you can wager between £0.10 and £100.00 per spin depending on your bankroll and outlook as a player. There’s a maximum payout of 250x your stake during the base game, which is relatively competitive and can be rewarding depending on your bet level.

Still, you’ll have to tailor your stake amounts during the base game, with the lowest value and most common symbols paying out at multiplers of between five and 60x your bet depending on the number of icons that you match.

The lowest paying symbols are defined by playing cards, including Jack, Queen, King and Ace. The latter is the most rewarding of these, paying out 5, 15 and 60x your stake when you land three, four or five on a single payline respectively. The red jockey and horse is the highest paying base game icon, with a maximum payout of 250x your stake when you mathc five on a payline.

There’s also the aforementioned wild, which substitutes for all other icons (apart from the scatter) and is the single most valuable symbol overall. Matching five of these on a payline will payout at 1000x your initial stake, while even landing three will trigger a 100x multiplier.

The Slot’s Bonus Rounds and Features

There are three distinct bonus rounds on Scudamore’s Super Stakes, starting with a Random Wild feature that can be randomly triggered on any spin and sees horse shoe symbols land between reels two and five before transforming into lucrative wilds.

Then there’s the Bet Slip feature, which allows you to hold 1 bet slip at any given time. You can then choose to purchase this, before selecting one of the available symbols and determining a fixed number of spins. The bet slip than tracks the number of symbols that land during the spins, paying the relevant multipler at the end of the round.

You’ll trigger the Peter’s Classic Cup feature when you land three of the ‘ Trophy’ wilds on reels 1,3 and 5. This introduces 12 additonal paylines, while each competiting jockey symbol has a different stake multiplier attached to it. As the bonus plays out, the reels spin and the icons take their positions, and winning with the red jockey will deliver the top payout of 5,000x your stake.

You can also play Scudamore’s Super Stakes on the move, with this HTML5-powered slot accessible seamlessly across smartphone and tablet (as well as desktop) devices. The game adapts depending on the screen size too, so you can play anywhere without overly compromsing on the experience.

However, the game doesn’t look particularly great when playing on your Android or iOS handset, with the relatively simple graphics often undermined on smaller devices. The reel grid is also condensed and takes up barely half the screen in portrait mode, so it’s best played in landscape.

The mobile version of the slot is currently optimised for Safari, so you iPhone users will enjoy the best possible experience when playing through a mobile browser as opposed to a native casino app.

The Slot’s Variance and Gameplay

At first glance, the slot has an extremely competitive return-to-player (RTP) rate of 96.99%, and this is indicative of low-variance gameplay during the base game and relatively frequent returns.

However, the game’s variance fluctuates significantly during the bonus rounds, particularly Peter’s Classic Cup feature. As we’ve already said, this introduces additional paylines and a top payout of 5000x your stake, but pursuing this prize will decrease your chances of winning and shift the balance between risk and reward considerably.

In terms of strategy, we’d recommend focusing primarily on building incremental base game returns, while using features such as the ‘Bet Slip’ selectively. After all, the returns during this feature can be as low as 2x your stake and in excess of 16x your wager, so deploying this every 50 to 100 spins can add a new dimension to the experience without compromising your winnings.

Conclusion – Enjoy Your Race to Riches!

To conclude, this slot combines a strong (and relatively unique) theme with excellent gameplay, with Richard Scudamore’s dulcit tones offering a particular treat to fans of horse racing in the UK!

However, it’s the side bets and random wilds that really make this slot unique, with Scudamore’ds Super Stakes allowing players the autonomy to alter the variance of the game and incur greater risk in the pursuit of increased multiplier and huge cash prizes.

Conversely, you can prioritise enjoying the base game and boosting your bankroll with incremental turns, and a favourable RTP rate of 96.99% should enable you to do this efficiently over relatively short periods of time.

The only potential downer is the mobile experience, especially when playing on an Android smartphone. This shouldn’t detract from the overall excellence of the slot, however, and we’d love to hear your thoughts if you’ve played the game!

up to £1,500 + 100 Spins on StarburstOur casino suggestion for Scudamores Super Stake
Overall Rating 9.7/10.0 Play here!
Full T&Cs apply. 18+. New players only. One bonus offer per player. Minimum deposit £20, max bonus bet is £5, bonus spins on selected games only and must be used within 72 hours. Bonus funds must be used within 30 days otherwise any unused bonus shall be removed. Bonus funds are 100% match up to £300 on your 1st deposit, 25% match up to £800 on your 2nd deposit, and 50% match up to £400 on your 3rd deposit. Bonus funds are separate to cash funds and are subject to 35x wagering the total bonus, cash & bonus spins. www.begambleaware.org.
NetEntAll 188 NetEnt slots at a glance
Popular Blog Posts
YggdrasilAll 15 Yggdrasil slots at a glance
Realistic GamesAll 15 Realistic Games slots at a glance
Home > Netent > Scudamore’s Super Stakes