Twin Happiness – A Hybrid of Cultures and Joy

Do you wish to experience twice the happiness? NetEnt has got you covered! With its awe-inspiring video slot, that is a mix of the fun and excitement of a fruit slot and elegance of a Chinese slot. So, what are you waiting for? Play online and witness twice perfection.

Are you ready to embark on a pursuit of happiness? Then try Grand Ivy, our top recommendation for January 2021, to be played with real money. 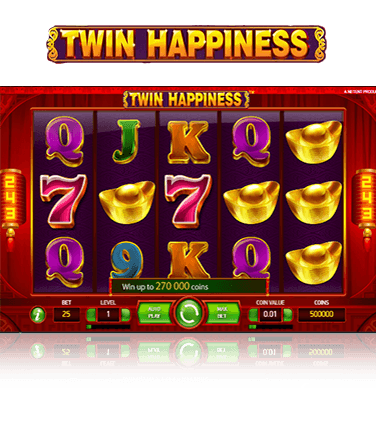 Game’s Rules and Features: Know the Game Before You Play

Do you know what’s better than being happy? Being twice as happy! That’s the motto of NetEnt’s new video slot called Twin Happiness slot; the game is a symphony made out of the best of two worlds. Traditional Fruit slots and glorious Chinese slots. It is painted beautifully on the canvas with its dominating red hues and breathtaking graphics that woo you to happiness.

While admiring the breath-taking visuals, you can play the game with 5 fixed bet lines placed at different bet levels and coin values. The maximum bet in the game is playable at the highest bet level and the current coin value, isn’t that a hoot? And the fascinating part is that the autoplay feature automatically plays the game for the selected number of rounds, making it all more enjoyable!

The slot has an oriental theme, and it surely will take you down the mystical lands of China, so are you ready to embrace the journey?

Midst the clouds, we walk down the mystical lands of China, which has brought you a double attack of joy with Twin Happiness.

The game has a fine and somewhat interesting structure with 5 reels where twin reels are linked together. Each spin starts with the same spin where the unique reel synchronizes, and then linking features appear on every single spin giving 243 ways to win. Isn’t that too exciting? Also, the game a whopping 1-10 default bet levels and default coin values giving 0.01, 0.02, 0.05, 0.1, 0.2, 0.5. Thus the minimum bet is 0.25, and the maximum bet is 125. And, excitingly enough? The minimum free round values range from Bet level 1 to 10 bet lines, enhancing the game’s interest levels.

So, what awaits you, hop on, and embark on the journey.

Twin Happiness is a glorious hybrid of Chinese and traditional slots thus, it has the best of both worlds. The slot has elegant traditional symbols of A, K, Q, J, 10 and 9 royals, along with peaches, lanterns, bars, lucky pink 7s and ingots giving 3, 4 or 5 on a payline giving you 2, 10 or 40 times your stake, the game is a gold mine of wins!

The symbols are well designed and graphically appealing. The game is a rush of excitement with its awesome twin reel feature. The game has a very high potential for winning with RTP 96.55% and a maximum win of 135,000.

So, embark upon and don’t miss the ride!

Bonus Features to Put a Smile on Your Face

Ah, if you seek a slot built of grandeur and elegance. And, has a mystical aura of Chinese tradition then Twin Happiness is just the game for you with an array of features:

Twin Reel Feature- In this feature, when (each) spin starts spinning with identical adjoining twin reels that are linked together and can appear adjacently on any of the reels, leading to a very interesting venture. While the spin goes on, the twin reels expand to triplet, quadruplet, or even quintuplet reels. As when the reels spin, there conjures the adrenaline rush baffling the player into the anticipation, whether it will be a twin, triplet, quadruplet, or a quintuplet spin.

Wild Substitutions – The amazing Wild symbols appear on reels 2, 3, 4, and 5 and substitute for all symbols.

Ways to Win – This feature restricts to 243 ways to win and no bet lines.

Want to experience the thrill of hybrid on your mobile phones? Then worry not! The game is compatible with any IOS and Android. But the condition is that the OS of the phone should be running and updated. The mobile version has excellent graphics and visuals. The game has similar features to its computer counterpart; it’s just as impressive.

The most remarkable part about the game is that the mobile UI is gracefully adapted to fit the mobile screen. In this version, the spin wheel disappears when the reels are spinning. The settings and options are aptly filed away in a separate submenu. The mobile version is very cautiously designed, making sure that the display is highly organized and clutter-free. But even though the game has taken so many steps to make it mobile-friendly, it in no way has compromised on its functionality!

The structure of the game is distinctive from the other games, with a hybrids feels of traditional and Chinese slots that have a Twin Reel feature where between 2 and 5 reels, there is a link together and display the same symbols.

The game has a very high payout RTP of 96.55%, which enhances the chances of winning. The volatility of the game is between high to medium. The rules of the game are simple, and the game has 5 fixed bet lines at different bet levels and coin levels.

All together, the slot is a heaven of exiting features. With lots of potential for winning.

If this niche enticed you and if you found your game in Twin Happiness, then we have one more remarkable suggestion!

Try out Sun and Moon slot machine. The game is an intriguing peek into early civilization where the world revolved around the Sun and the Moon, it is a reminiscent of Mayan Astrology Calendar, with several features and symbols based on the same.

The game has a setup of 20 paylines stretched across 5 reels.

It’s an enthralling game, and I believe it won’t disappoint you!

In my opinion, the game has some great features like automation and Twin Reel features, which makes the game very interesting. The game has potential, but because the variance is between medium to high, we cannot expect too many bonuses, and that’s a bit sullen fact. The game is fun to play with, and the graphics are pretty decent. The mobile version of the game well-constructed and has aptly economized the space. The RTP of the game is high. Overall the game is fun to play.

However, this is my take on the game. I would love if you guys put your opinion in the comment section. So, we can have a fun discussion.

up to £1,500 + 100 Spins on StarburstOur casino suggestion for Twin Happiness
Overall Rating 9.7/10.0 Play here!
Full T&Cs apply. 18+. New players only. One bonus offer per player. Minimum deposit £20, max bonus bet is £5, bonus spins on selected games only and must be used within 72 hours. Bonus funds must be used within 30 days otherwise any unused bonus shall be removed. Bonus funds are 100% match up to £300 on your 1st deposit, 25% match up to £800 on your 2nd deposit, and 50% match up to £400 on your 3rd deposit. Bonus funds are separate to cash funds and are subject to 35x wagering the total bonus, cash & bonus spins. www.begambleaware.org.
NetEntAll 188 NetEnt slots at a glance
Popular Blog Posts
Play'n GOAll 51 Play'n GO slots at a glance
Genesis GamingAll 15 Genesis Gaming slots at a glance
Home > Netent > Twin Happiness