Victorious MAX – An Emperor or The Steely-Eyed Centurion

Ready to capture the Roman Empire with rolling drums? This is NetEnt’s initial mobile-first game with a 5-reel slot, helping you enter the Roman world. With 243 traditional ways to conquer, your destiny is prewritten by playing online for free. But don’t forget your swords and armours anytime!

Interested in a Bonus? Play Grand Ivy, the game of January 2021 and get real money rewards! 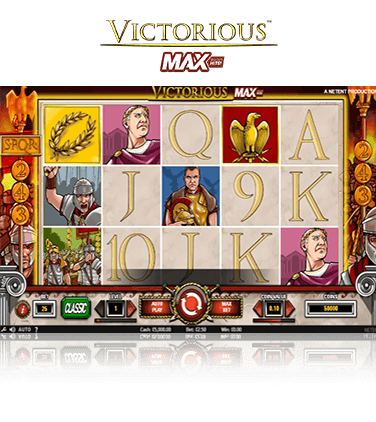 Rules of The Game with Some Interesting Features

The army men have surrounded you. The Roman Empire has been ruled for over 7 years till date as the ‘Victorious’. And today, with the power of MAX volatility, the ruler of this kingdom is provided with a throne to sit and win bets worth x7000! Don’t worry about getting defeated in your journey, as you now have 2 chances to acquire the kingdom. You can flip between the 2 volatile versions effortlessly.

All you have to do is, place a bet from 243 powerful ones and Victorious MAX will offer the virtue of winning the best.

Above all these, if you believe that Julius Caesar was the most altruistic, then this game is about to question your faith with its 6x spins, which is presented for FREE! So, get ready to win the highest pay as a Roman ‘Emperor’.

Imagine winning 25 Free spins. Is this possible? Yes, but you should possess the Golden Wreath Symbols as scatter in the slot. Depending on whether you have a 3, 4 or 5 reels, the Romans are going to honour you with 15, 20 or 25 Free spins! Do you hold the symbols A, K, Q, J, 10, or 9? No worries, as the win here is a mid-paid one.

Your field is not going to be easy, but with the support of free spins, you can get rewarded up to 7000x from your present stake. Moreover, think about making a big decision about Retriggering. At times of free spins, you can retrigger the round and with 3+ scatters, and your value can go as high as 50 total Free spins!

Doubtful about waging? Check the “Coins” you have, and this number will make you choose the right path of destiny. The drum beats are ready. Be an emperor to get the highest pay or make sure to lead to the Roman units, at least as a steely-eyed centurion!

Present among the vibrantly-coloured soldiers and war officers is none other than the great warrior Julius Caesar himself. Are you leading the marching units? Or do you stand by the fearless legionnaire? Whether or not you are ruling the Romans, the Centurion and Caesar will give you the most prestigious wins for your war, depending upon your reel and play!

Make sure to set the ground and your vehicle carefully, using the right bet from 243 options. Get ready to recreate the major battle with the Roman Empire once again, but this time for a better and higher win of 7000x!

This is the time to raise the Wild symbol of Roman Eagle to drive off your enemies.

Added Excitement with Bonus Features and Rounds to Win

As the Roman Men are now under your control, the activation of certain symbols presents you 3 Golden Free Spins to march your way inside the empire. This is possible when you get three same symbols for the spin.

Note that the army follows in the left direction reel, so the symbols rise from in succession from your left.

You can also prove your strength and agility by capturing up to 7,000x from your present bet. But what is notable about this winning feature is that you can create this opportunity by the trigger of your same free spin.

All you have to do is stay thankful to Caesar for gifting your free spins with a worth of 6x!

Handle the Army with Progressive Jackpot

How amazing would it be to win a huge sum of money and take in-charge of the bold and beautiful Roman empire? But the reality is you can get up to 7000x from your current stake value which is around £$875,000.

Thinking of the possibilities, Romans offer good deeds for the best price to their leaders. Saying this, your army is the boon for winning this 7000x using 1 non-progressive jackpot. Note that you can avail this option for each free spin. What’s more? Each free spin that you perform is worthy of a 6x high-ranking multiplier!

The volatility and power of Romans are going to be brutal and tough. View yourself on the side of victory and the MAX army will devote their time and support in the form of huge physical and visual reaps!

Which One To Go With – Desktop or Mobile Version?

Once upon a time, the Romans were powering up their swords and shields. And today, after the relaunch of their Victorious moments to the MAX, the soldiers are now set for a breath-taking new growth in this classic casino title. Moreover, this is one of the top-notch mobile-first games in their initial phases.

There is nothing to stop the journey from now onwards. Having the great Caesar next you and the availability of 5 powerful spins, shine a new beginning to the life of Ancient Rome, regardless of whether it is your Androids, iOS, tablets, or even PCs, Apple Mac, and Windows!

So, the medium of capturing the army should not be a limitation for you and hence, make sure you put the right move upfront, with the support of any technological medium.

Extreme Variance with High RTP for a Strategical Triumph

You have better chances of capturing the Romans. However, it is going to be quite challenging, since the Volatility of MAX is extremely high after the army men have boosted themselves for the past seven years.

To be honest, the empire is now present on a strong platform with its classic multi-volatility option, a boastful RTP value of 96.95% and an overall high variance range, to make their new Roman leader prove themselves!

But, never lose hope, as Caesar comes to the rescue with the x1500 bet to x7000 achievable bets and even the resurrection capacity to play for the 2nd time after you defeat!

Conclusion – Victorious After 7 Years: Worth the Wait

Roman Glory is awaiting its new leader. The path is tough; the men are powerful. Yet, the win is big. The acclaims and drum beats have started to voice. Now is your time to capture the empire and make an astonishing triumph that is completely worthy of your time and gameplay, which is about 7,000x your bet.

Think no more – A new level of excitement, fun and achievement are expecting you. Sharpen your weapons and your mind for a classic Victorious MAX with Caesar in Ancient Rome.

For the leaders who paved the way inside the castle, how did you come across your hurdles? Was the Victory an easy one for you? Share your views, comments, strategies, and opinions below, as it is going to help the other brave men and women, to make their way inside the Roman empire as you did!

up to £1,500 + 100 Spins on StarburstOur casino suggestion for Victorious MAX
Overall Rating 9.7/10.0 Play here!
Full T&Cs apply. 18+. New players only. One bonus offer per player. Minimum deposit £20, max bonus bet is £5, bonus spins on selected games only and must be used within 72 hours. Bonus funds must be used within 30 days otherwise any unused bonus shall be removed. Bonus funds are 100% match up to £300 on your 1st deposit, 25% match up to £800 on your 2nd deposit, and 50% match up to £400 on your 3rd deposit. Bonus funds are separate to cash funds and are subject to 35x wagering the total bonus, cash & bonus spins. www.begambleaware.org.
NetEntAll 188 NetEnt slots at a glance
Popular Blog Posts
ThunderkickAll 20 Thunderkick slots at a glance
NextGenAll 111 NextGen slots at a glance
Home > Netent > Victorious MAX