Leprechaun Goes to Hell – Luck of the Irish, but on Fire

After a short jaunt looting Egyptian temples, our short Irish friend has booked a one-way ticket to Hades. Play’n GO definitely tries to appeal to the young male mind, therefore the company has released numerous titles with beautiful leading ladies. This time, they have added fire to the mix in hopes of delivering an even more sizzling experience. Forget rainbows, these pots of gold lie in the Underworld. Try a free demo version down below.

If this game left you feeling lucky, then you have the very real opportunity to play for some real money at BetVictor, the top casino for June 2021. 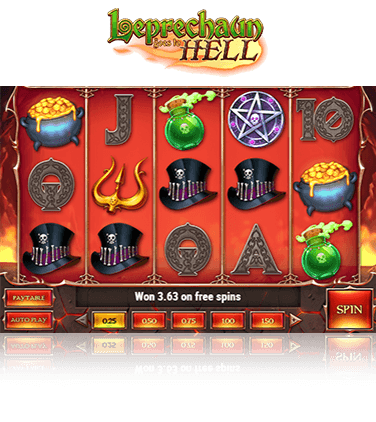 Upon your first readthrough, this title’s rules may seem a little complicated, but after a few spins it will all become clear. Leprechaun Goes to Hell is a five-reel, three row, 25 fixed payline video slot. The game’s symbols are the standard playing card symbols, although with a hellish twist, and four demonic symbols stylized as a bubbling potion, trident, pentagram, and hat. If you are lucky, and these land on a payline, the icons will transform into slightly more welcoming versions of themselves. Little details like these are why Play’n GO’s slots are always pleasing on the eye. Here, there are two wilds, one of Evilene (get it), and the other of the slots eponymous main character. The wilds replace all symbols except the pot of gold scatter symbol. If both wilds appear on a payline, the win is doubled. Leprechaun Goes to Hell has two bonus games to help turn up the heat. The first is a free spin game activated if three scatters are on the board and can award up to 50 free spins. A multiplier increases wins during the free spins at a rate of 2x-10x depending on how many scatters appear during the free spins round. The second game is known as the Infernal Bonus, which is triggered by three Evilene symbols. The game is a three-reel bonus round, with the same symbols as the base game, but with different values. The goal is to raise the boiler temperature in hopes of reaching the jackpot. After each win, Evilene blows you a kiss, and our bearded buddy is forced to shovel coal into a hellfire boiler. It never ceases to amaze me, what lengths we humans will go to for just a little attention from the opposite sex. The two bonus games can lead to some big wins, and just like the game’s short Irish masochist, will have you begging for more.

Conclusion – An Eternity of Torment

Leprechaun Goes to Hell is an evil twist on another Play’n GO slot and offers plenty to the sin-inclined. We activated the free spin bonus game with a welcomed frequency and were even able to get up to 30 free spins. However, we couldn’t unlock the Infernal Bonus until nearly 300 spins into the base game. If you spin two Evilene’s, she will spin a reel one more time for another chance to unlock the bonus game. However, this devil let us down again and again. I guess they weren’t lying when they said “eternal” punishment. We recommend turning off the game’s music unless you enjoy the soothing screams of tortured souls, but if you fancy these things, this is the slot for you. Did you have a wicked time? Join the conversation in the comment section below.