He is the strongest out of all mortals in Greek Mythology and this Playtech video slot is based on his magnificent and fierce personality. To provide entertainment, there are plenty of bonus and free games features, and 4 jackpots to be won. Give the game a free try right here!

Want to play for real money? Make a bet at Casino.com – top recommendation for January 2021. 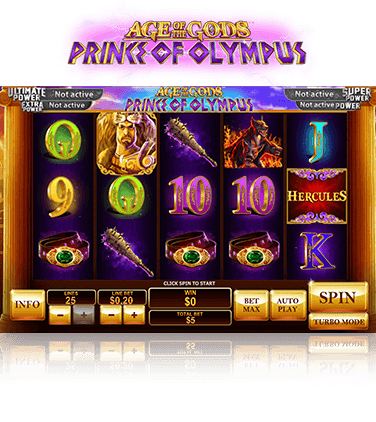 Real Money Casinos with Age of the Gods Prince of Olympus

Age of the Gods Prince of Olympus is a 5-reel ancient Greek video slot with 25 paylines. Hercules is Wild substituting for all symbols except Scatter and Bonus. When he appears on reel 3 or simultaneously on reel 2, 3, and 4 the Herculean Strength feature gets on making the entire middle or all 3 reels turn into one giant expanding Wild field after which the rest of the symbols undergo one or two Re-spins. To start the Bonus round, you will need two Hydra symbols landing on reel 1 and 5 – your goal here would be to destroy this mythological creature accumulating cash prizes or multipliers. Three or more Scatter symbols anywhere on the reels not only have a payout but do also trigger 10 free spins with an x3 multiplier. Plus, any spin could be the lucky one to trigger the jackpot game and grant you one of the 4 jackpots.

Witness Hercules in Action in the Following Preview

Other Versions of This Slot

There are another 6 similar to this one slots also developed by Playtech and all forming the already popular Age of the Gods Ancient Greek series. They all share not just the theme but the progressive jackpots and the standout graphics and the antique atmosphere too. A few examples for you to try out next will be Age of the Gods Goddess of Wisdom dedicated to the protective Athena, Age of the Gods Fate Sisters spinning around the Moirai accompanied by their enchanting presence and Age of the Gods Furious Four or the initial Age of the Gods where you can face a whole group of deities ready to show all they can do for you.

Holding an Ancient Greek theme, this slot carries all the key elements – beautiful and detail-oriented graphics, a strong male character in the lead role, a feast of generous and frequently appearing features, and an intense and dynamic musical background. The highest paying symbol- the three-headed dog Cerberus, pays x4.000 on your total bet if you manage to hit 5 of it on one of the paylines. Bets start from £0.25 and go up to £500 and even the lowest and non-winning one can start the jackpot game. If you have already tried Age of the Gods Prince of Olympus, make sure to leave your feedback or comments in the box below.

180 Spins + £100 BonusOur casino suggestion for Age of the Gods Prince of Olympus
Overall Rating 9.4/10.0 Play here!
Full T&Cs apply, Spins: New customers only. 20 spins after signing up. 180 more spins after first deposit 20 immediately and a further 20 per day for the next eight days after depositing. Spins and bonus wagering on Age of the Gods slot games only. Wager 20x before withdrawing. Welcome Bonus: New customers only. Minimum deposit £20.Maximum bonus £100. Wager 40x before withdrawing. Game weighting applies please see below table. ID must be verified prior to participation. Bonus Betting limits: Slots - £5 All other games 10% of bonus amount.
PlaytechAll 189 Playtech slots at a glance
Popular Blog Posts
IGTAll 89 IGT slots at a glance
NextGenAll 111 NextGen slots at a glance
Home > Playtech > Age of the Gods Prince of Olympus