Dolphin Cash – An Overview of the Key Info

This aquatic themed slot is bright, energetic and lots of fun. Our friendly mascot the Dolphin literally jumps through hoops to win coins and prizes in a stand out bonus game. Playtech have pulled out all the stops to provide excitement on the reels. You can play for free right here.

If you like what you see and fancy playing for real money? Head on over to Casino.com our top choice for September 2021. 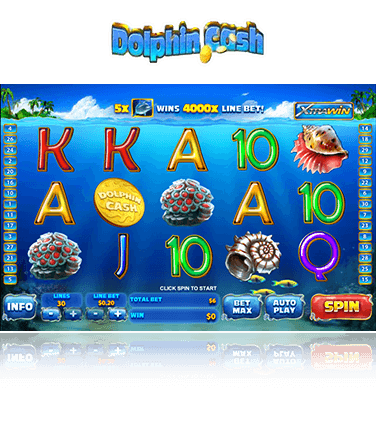 An overview of the rules

This is a typical 5 reel Playtech slot with an impressive 30 pay lines. The Wild symbol is illustrated by the dolphin and interestingly only appears on reel 5 where it instantly becomes a shifting Wild and jumps one reel to the left on each successive spin. The top payment for Wilds is 4,000 coins when 5 hit the reels. Uniquely, this slot has an ‘Xtrawin’ option. If you choose to turn on ‘Xtrawin’ mode, all bonus symbols appearing on the fifth reel are cloned and now expand to cover 2 rows and shift together as locked Wilds for the next four spins. When 3 or more Scatter cash coins appear within the base game, the player is awarded 12 free games where winnings are tripled. When it lands on the first and last reel the moon on the water icon starts the animated Dolphin Jump Bonus round. The player controls the dolphin, directing it to collect coins by clicking on the jump icon. Aside from the larger wins, there are some good mid level payments, for example the Seagull icon pays 1,000 with 5 on the reels. Smaller wins come via the shell icons paying out 500 coins, and the coral symbols awarding a maximum of 250 coins.

Watch the Game in Action in this Preview

There are of course alternatives given the popular nature of the Dolphin theme. Dolphin Reef is the prequel to this slot and has some distinct differences. Firstly, there is no bonus game in the earlier edition, the graphics are a little outdated and the ‘Xtrawin’ feature hadn’t been developed at this point thus is missing from this title. There are however some endearing features to this slot, namely that it may appeal to more traditional players given its focus on standard base game bonuses over entertaining bonus rounds. Also, the simplicity in gameplay and less dazzling graphics set to calm sounds make this seriously easy going and great if you want something less intense and a little more chilled out.

Conclusion – Glossy slot with a stand out bonus game

Dolphin Cash plays out under the water. Quality animations make winning combinations pop out of the screen and they seem to do so often since this slot is packed with features to stimulate combinations to hit those jackpots. The Xtrawin symbol is ready when you are, sparkling enticingly on top of the reels. If you’re after extra thrills this feature gives you a chance at bigger winnings where not only one but two expanding locked wilds can now enter the base game. Its pretty cool to see two dolphins jumping across the screen and I found this happened often which was great for payouts. The second screen bonus plays more like a computer game than a slot since there are no reels. Although coin wins can mount up in this feature, the play style might not suit more traditional players. If you’ve played this game before, you can share your thoughts and experiences below.