With a potential of raking in over 3,000 times your initial stake, this space, gems and jewels themed Gems Gone Wild Power Reels slot is set to blow you away with an array of unique and incredible wild features. Get set to launch into a galactic spree where you stand a fair chance of landing incredible winnings. Check through our Gems Gone Wild Power Reels slot review.

To grab your opportunity to take that trip to the galaxy of jewels, try Spinit – our best choice for playing this slot in January 2021. 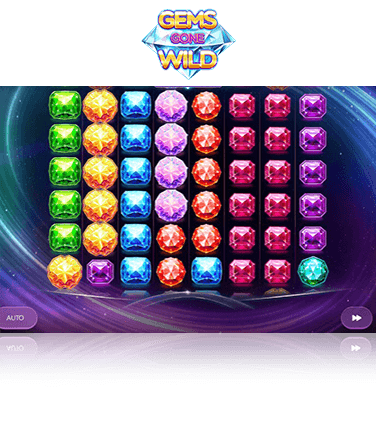 A Rampage Of Gems

Having only commenced operation in 2014, Red Tiger Gaming software brings into the world of gaming, unique slots in compliance to regulations set by recognized bodies. Slot games have been this developer’s main focus, even though the brand has a few table games in their collection.

This gem themed slot game runs on an 8×6 reels and rows grid, featuring flamboyant gems in an outer space environment. The slot developer employs the layout coupled with valuable jewels to produce a slot game with unique features. The Gem Gone Wild Power Reels gives prominence to the gems, following its theme to the latter.

The gameplay runs on 30 traditional paylines, in a multi-directional pattern featuring at least 3 bordering reels. This gameplay allows more than a win appearing on a sole payline. The paylines run both ways as a winning combo can begin from any of the sides, either from the left or from the right.

To access this galactic quest for jewels, you must first select your preferred stake using the + and – symbols on the control panel. You are allowed to select from within a range of 0.20 to 20 per spin and can change your bet value before and after each spin.

Similar to the nature of the initial Gems Gone Wild slot, the gameplay is simple, but it all gets exciting when the wilds are called upon. The wilds add an edge to the slot’s gameplay and your winnings, unlike the 8 other symbols.

A spin can reveal a random wild that can likewise spur the locked wilds feature. This feature gets wilds locked in position repeatedly until they cease to appear, which then resets the game

Just as sole symbols can be displayed in 2×2 or 3×3 sized blocks, wilds can do likewise. These sizes of wilds can land randomly at different instances during the game. When these wilds appear concurrently, it goes on to build you a better win.

Note that these wilds can substitute for other symbols, if possible, and they are not seen regularly during the game. The highest win possible in this game is about 3000 times your first gamble, and with the highest bet being $200, you can win as high as $600,000.

The Galactic Spree And Bonus Rounds

As we mentioned in the previous section, the gameplay of the Gems Gone Wild Power Reels slot machine is basic and direct with no extras yet asides the wilds. For now, the game does not have a bonus round or any other special feature to spice up the gameplay. It appears like a cluster game but happens to run on paylines that interestingly, work both ways.

Hence, the game might not strike you as one of the best, but it holds some leverage over other slots in certain aspects. We advise that you keep a tab on our timely reviews to get notified once there is an update in the gameplay of this slot that might feature a bonus game.

No Progressive Jackpot Yet

Gems Gone Wild Power Reels slot in certain ways is an upgrade from the initial Gems Gone Wild slot with additional features and amendments in certain areas. These amendments still do not feature either a fixed or a progressive jackpot. The game winnings available to you as a player can only be amplified by the wild symbols.

Even without a progressive jackpot, there is still a relatively high potential win up for grabs for you in this video slot. Stay tuned to our reviews to get first-hand information when there is a new development to this slot that might possibly feature the inclusion of a jackpot.

In a bid to provide this video slot for a wide range of casino citizens, Red Tiger Gaming developed Gems Gone Wild Power Reels slot to be used easily on various mobile platforms. You can access this slot through your Android or IOS devices, your tablets or any other smart device anywhere you are. This usability allows you as a player to enjoy this gem-filled exploration with ease without barriers just as the game occurs in a limitless outer space environment.

The mobile play version reveals a likewise flamboyant, high-quality visuals and an easy to fiddle gameplay, just as the desktop version of this slot offers.

How Often Will The Stars Appear?

The accessibility of wins frequently is a result of the medium variance of this gem-themed slot. So, expect to see the stars, often when you play this game. Regardless, if you desire to win more from this slot game, we advise that you aim for the wild symbols in the game.

For alternatives for this online slot, try out any of Milky Ways slot machine or Starburst online slot. Milky Ways slot from Nolimit City parades gems of various colours standing against a black hole. The slot game features a rich array of perks like multipliers and expanding reels plus a bonus game feature.

Starburst from NetEnt, on the other hand, is another similar slot with five reels and ten paylines that combine winnings from both ways, either from the left or from the right sides. Wild symbols and respins further garnishes this slot to create a masterpiece.

Conclusion – An Easy To Play Slot

For us, we expected a cluster game as we spoke of above, but it turned out that this game employs paylines in its gameplay. The gameplay is basic and very easy to navigate through with no special addition as regards features but a decent variance and RTP rate to balance out.

The gameplay seems rather monotonous, except for the wild symbols that are capable of igniting a payout of about 3000 times your initial wager. If as a player, you had fun playing the preceding version of this slot, this new version would still be exciting. Feel free to share your experience with us in the comments segment of our Gems Gone Wild Power Reels slot review.