Matsuri – I think I’m Turning Japanese I Really Think So

As the sun sets upon the land of the rising sun, villages come alive. Take a walk along the colourful and tasty boulevards of a Japanese community festival. Play’n GO’s dazzlingly-designed slot fulfils all of our orientalist assumptions and offers something for everybody. The slot features stacking wilds, free spins, and a bonus game that will have players fishing for some huge wins. Try a free demo below.

If you enjoyed this midsummer slot, then play for real money at BetVictor, the top casino for January 2021. 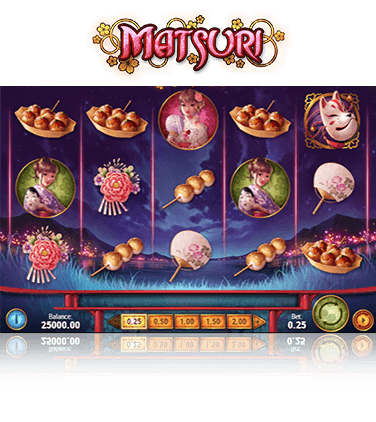 Matsuri is a five-reel three-row slot set at a firework filled Japanese summer festival. The game has a stunning collection of symbols which feature three high paying Japanese Geisha girls, who look strikingly un-Japanese. The other symbols include tasty Japanese street treats like shaved ice and tangy octopus dumplings. There are 25 fixed paylines in the game that pay from left to right. Play’n GO’s slot features three bonus symbols: a wild (replaces all but scatter), a cat mask scatter symbol, and a gold fish shaped bonus symbol. If a player spins three bonus symbols, they activate the kingyo sukui (gold fish scooping) bonus game. In the bonus, players scoop goldfish out of a pool to reveal huge wins. Once the fish scooper breaks, the game is over. Although this game gave us some large rewards, we found most of our success in the free spin bonus game. The free spin bonus game is activated when three scatter symbols are spun. During the free spin bonus, the wild symbol becomes an expanding wild that grows into a spectacular lantern banner that covers the entire reel. The banner walks from left to right on the reels for each free spin. We managed to get multiple banners to appear on the reels at one time, and the payout was bigger than many found in other free spin bonus games. Any additional scatters spun during the bonus will award up to twenty free spins. We were able to get all twenty free spins three out of the four times we played this bonus game.

It would be understandable if you looked at this slot and assumed it was just another Play’n GO title featuring an ethnic girl. The developer deserves this criticism. Matsuri, however, looks like it was developed with genuine interest in the culture that it is appropriating. The symbols and bonus games depict traditional aspects of Japanese life, rather than the typical lazy stereotypes. As a result, this game was more rewarding than the typical oriental offering. The game’s beautiful moonlit sky as well as its traditional taiko (Japanese drums) music add a nice texture to a theme that already had rewarding enough gameplay. So, if you’re looking for an oriental slot, but one that seems less offensive, then this is perfect for you. Did you enjoy the game as much as we did? Let us know what you think in the comment section below.