Pearls of India – Spin Your Way to Karmic Rewards

After chasing riches in South America and along the Nile, our adventurer sets his sites on India. No, it’s not Indiana Jones, it’s the second most famous adventurer archaeologist, Rich Wilde, who returns in Play’n GO’s treasure hunting sequel to Aztec Idols. If you can help Rich Wilde find pearls and explore ancient shrines, this slot’s payouts may have you feeling as though you have achieved Nirvana. Try it for yourself with our free demo below.

Add some danger to this adventure by playing for real money at BetVictor, the top casino for January 2021. 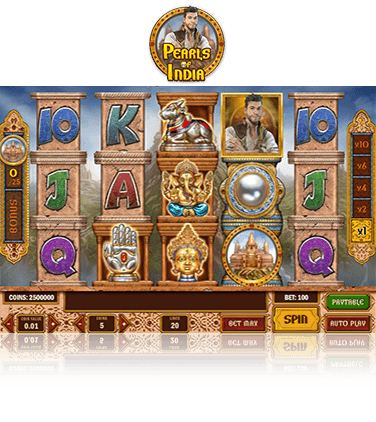 This Play’n GO slot is a five reel, three row game, with 20 fixed paylines that left to right, except for scatter symbols which pay any way. The slot is set in front of three Himalayan temples perched on top of a cascading waterfall. Similar to Rich Wilde’s other exotic adventures, the goal is to collect treasure, in this case, the Pearls of India, in hopes of finding clues to uncover riches in various temples around the country. The game symbols are made up of playing card symbols from ten to ace. The highest paying symbols are various types of Hindu iconography with the powerful deity Krishna sitting atop the table. Rich Wilde is, you guessed it, the wild and substitutes for all symbols except the bonus and the scatter symbol. The game features collapsing symbols and a multiplier that increases up to 10x after each win. If a player spins three scatter symbols, they are awarded with 10 free spins. Three mysterious bonus games are activated by collecting 25 bonus symbols. A nice tracker sits to the left of the game matrix that helped us know when we were close to activating the game. Once the bonus is activated, you can choose between three bonus games: The Wall of Shiva (Pick a tile to reveal wins), the Statue of Vishnu (choose a pearl to win) and the Wheel of Brahma (a spinning puzzle that pays big when icons are lined up).

Pearls of India offers a nice change of pace from Play’n GO’s typical big-breasted adventures, instead choosing to focus on a different aspect of male (or female) desire, the call to adventure. Fans of other Rich Wilde titles will have a blast on this spiritual slot, that promises to feed the soul and your wallets. The game’s RTP of 96.87% and 20 ways of winning, will have you wondering if you did something right in your past life. The slot’s animation isn’t the most exciting, but the inclusion of three different bonus games created enough variety for some long-lasting entertainment. Write a comment in the comment section below.