Midnight Racer – Putting The Pedal to The Metal

Take a drive through the city at midnight with no speed limit and enjoy thrills. This video slot accelerated from Saucify allows players to win up to 124,890 coins with possible 20 free spins and the ability to make triple wins. If you feel you can handle the heat while in motion, hop on the driver’s seat to play the game.

Once you feel ready to take your chances, try Videoslots Casino – our top choice for playing this slot in January 2021. 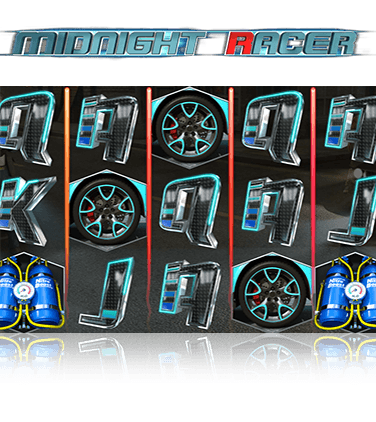 Spin Your Way to Massive Wins

After the sunset in the city, under cover of darkness, the streets come alive with tuned engines’ roar and the screech of burning rubber. Join Hans, Hector, and Kumiko compete both for respect and become the ultimate racer in the Midnight Racer online slot.

Sauify’s slot comes with a game structure that is built on five reels and three rows. Inspired by street racing scenes and coupled with the 3D graphics that give it the ’80’s video game look and the banging soundtrack, Suacify has proven to have put quite a lot of skillfulness to producing the game.

Midnight Racer slot has a total of 30 thirty pay lines, and the winning combinations are paid from left to right. As we mentioned, there are two wild symbols in the game which could replace all other except the scatter symbol. The wilds also act as a multiplication factor, increasing the winning combination twice or trice if they appear during the free spins feature.

The bet variance of the game is huge; players could start from a minimum of 0.01 per spin and could increase the stakes up to 37.50, making the Midnight Racer online slot very attractive in terms of huge payouts if you hit a scatter and a multiplier at the same time.

There are special symbols in this game, including the nitro boosting fuel, high-performance tiers, and manual stick shift. Altogether the game possesses twelve symbols in total, which includes six high paying picture symbols and four chromed – up royals.

Players can get up to 7000x with the wild and scatter symbols pay. In total, up to 262,500x in this Midnight Racer slot can also be won. This is possible because there can only be a maximum of five kinds of the win, and since the calculation is a multiplier based, the player’s stake is doubled.

Among other things embedded in the Midnight Racer slot review, we have collated the bonus features, and they are as follows. The scatter symbol is the only symbol not replaced by the wild symbol, and the wins are multiplied by the total credits wagered. Note that three or more Free Spins symbols anywhere on the reels activate Free spins during which wins triple. Free Spins can be activated again during Free Spins.

Regarding bonuses, you can have the Midnight Racer Wild where wild wins are doubled plus when you get two or more of the same kind. Having five gives 7000x. Flag girl free spin is available too, as she is the scatter in this slot. Get three or more of her anywhere on the screen to activate free spins and cash payments as high as five pay 100x your total bet.

Play as You Move

Just as every desktop application has seen the need to go mobile to increase availability to a larger audience, Suacify, has also made the mobile version of this Midnight Racer slot machine allows you to access the game on Android and MAC IOS with the help of HTML5 technology.

Like the original version created for a desktop, the video slot is available for play on any mobile devices, either Android or MAC iOS. From our perspective, the graphics are a little bit heavy, so the game will run smoothly and best on higher range phones and tablets. There is no difference between the mobile and PC versions, so players could enjoy their favourite slot wherever they are.

The Midnight Racer slot RTP is 95.97%, an encouraging average return to player ratio when compared to other slots of this standard. But, considering the fact this game has medium-high volatility makes it appealing to the players. Plus, there are up to 30 pay-lines, which provides the possibility of over 10,000 symbols combinations.

There is no particular strategy for playing the game as there is no level up option, so it is up to your luck to hit the wild symbols screen. With Midnight Racer RTP this high, it would be a crime not to win.

Where to Drive Some More

We had the need for more speed, and so conducted some research and found a little gem developed by Microgaming. 5 Reel Drive gives you the entertainment and thrill of street racing and gives you the opportunity to even evade some law enforcement. Stay tuned for more recommended games in Midnight Racer slot review.

Conclusion – How we Won The Race

From information gathered and experienced, this is a pleasant video slot game with an electrifying theme that can still be improved. The RTP is on the average, but the amazing bonus features serve as a cover-up for it. The automatic feature keeps you relaxed as the game keeps making spins, depending on how much has been staked. We hope our Midnight Racer review is well understood and that urges you to try it out!