In Greek mythology, the summit of Mount Othrys was the home of generations of gods and goddesses, known to all as the title of this game. This slot game from Scientific Games draws inspiration from this lore for its imagery, aiming to immortalise the might and mystery of figures such as Zeus and Hera in their pixelated forms. See what we mean in the free demo of the slot below.

Should the wisdom of the Gods be kind to you, you can also play for real money at 888casino, the top casino for October 2021. 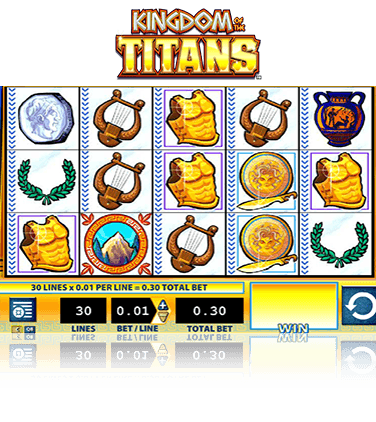 Real Money Casinos Where You Can Play Kingdom of the Titans

For a Greek mythology-themed slot game that was developed in 2011, Kingdom of the Titans has a significant amount of history in both the theme topic itself and in online slot development to draw from. Unfortunately, the developer has apparently decided to ignore all of this background. Instead, we have a slot game that is reminiscent of the olden days in all the wrong ways – we’re not thrown back into the Golden Era of Greece, but rather the Atari-era of video game design. The pixelated designs of the symbols are a case in point: we’ve got the god of lightning and thunder himself, Zeus, as well as his wife/sister, Hera, as the two highest-paying symbols. They’re surrounded by a collection of random bits and pieces to make up the rest of the symbols, including armour, weapons, a vase, laurel wreath and a lyre. The symbols pay out across 30 fixed paylines in the five-reel, three-row grid, with the game logo playing the role of the Wild symbol, replacing everything except the feature symbol – a hill shaped icon that could possibly be Mount Othrys itself – though that’s based purely on outside knowledge. There aren’t any bonus games, special features or free spins to look forward to in this game, and the heroic adventure soundtrack is not by the clunky sound effects when clicking the spin button or finding a winning payline. You can be sure that mute button was hit pretty quickly for this game.

Take a look at a Demo Video

Conclusion – Could be Worse

The best thing we can point out about the Kingdom of the Titans slot game from Scientific Games is that it has a good return to player (RTP) percentage of 96% – but that’s about it. If you’re hankering for a nostalgic combination of 80s pixel graphics and a vaguely-mythological theme, then maybe you’re in the right place. Just don’t expect anything more than that. Did you overthrow the mighty Zeus playing this slot game? Tell us about it in the comments below.