Great flying bolts of lightning… Scientific Games has gone all Hellenic on us! Climb up the slopes of Mt. Olympus, into the cloud world of the gods. Do you have what it takes to go from zero to hero in this slot game? Then, try out the free version below… if you think you are worthy!

Gaming like a God? You can play for real money at Casumo Casino, the top casino for January 2021. 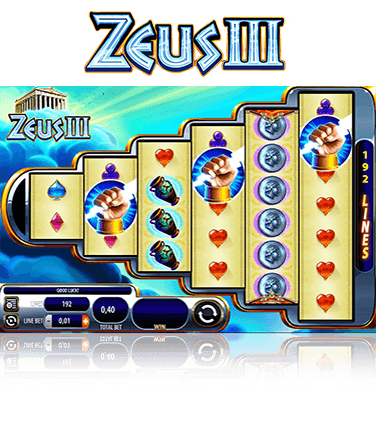 Real Money Casinos Where You Can Play Zeus 3

The Greeks gave us cartography, zoology, modern astronomy, philosophy. They basically invented modern science, so what has Scientific Games done to honour its intellectual ancestors? It has brought out another title in its titanic series. Zeus III is the latest in its pantheon of slot games and is a lot simpler and more fun to play than it is figuring out how to pronounce the name of Terpsichore, the muse. The setup is a little unconventional, having six reels, ranging from two to seven rows. The game has 192 fixed paylines, and the gameplay is pretty easy to understand. The god of lightning acts as a wild, and if you fill an entire reel with him, then that reel turns into the wild reel, which massively ups your chances of successfully getting combinations. If you match at least three feature symbols, you will earn free spins. During the free spins, the reel positions are switched, maximising the possibility of wins. There is no real music in the game, but then again this isn’t called Apollo III! The sound effects are also more than a little annoying. This is often a problem with Scientific Games titles, and we have tried praying to the gods for it to change its ways. But the muses clearly haven’t smiled on them yet. So, in the meantime, you’ll have to cope with tinny jingles (or find the mute button) in order to get your fix of all things Olympian.

This slot game from Scientific Games performs well across most of the aspects we survey. Its only real drawbacks are the sound and the lack of a full bonus game. But even the mighty god of the sky had his flaws. I mean, by thunder did that god have his flaws, just ask Io… The free spins feature benefits from the flipping of the reels, increasing the player’s chances of winning. The fact that you can form fully wild reels is also a nice touch, contributing to what is, overall, a great slot game to play. Feeling inspired to start a classic course, or write your first epic? Then tell us what you liked about Zeus III in the comments below.