This is a five-reel video slot themed on football, flanked by an enormous stadium, and positively brimming with mediocrity. The game comes with wilds and free spins, and player caricatures rougher around the edges than Joey Barton.

Playing for real money is possible over at Casumo Casino, the number one casino for May 2021. 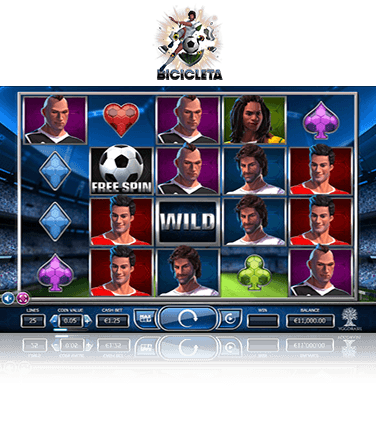 Yggdrasil has a decent reputation for making high-quality slot games with unique features, but Bicicleta does not belong in that category. The graphics and presentation are reminiscent of the menu screens in an early Japanese soccer simulator, except here you’ll be trapped between four faceless menu walls of mundanity. Getting three or more scatter symbols unlocks something vaguely less bland, with up to 24 free spins on offer, but that’s as good as it gets I’m afraid. There are 25 paylines, paying from left to right, and along those paylines you’ll encounter a cast of discarded Roy of the Rovers nemeses. The highest paying symbol is Robert Lewandowski’s Chinese cousin, and he’s followed by Carsten Jancker with a mohawk. Lower-paying symbols include Willian with dreads, and Luis Figo before a much-needed haircut.

Video Preview: Eyes on the Prize

Bicicleta is the Spanish word for bicycle, and a bicycle kick is one of the most visually impressive feats in football. Ironically, this game is as visually impressive as a Sam Allardyce team, utterly lacking in thought and imagination. It feels like a rush job, presentation-wise, and that’s a shame as it’s not like there are many football-themed games on the market. No, that’s not true – football slots are a dime a dozen, and it’s one of the more saturated genres out there. So, with such rife competition, a great deal more effort is required to compete and attract plucky punters. Of course, a slot game could be as fun to look at as a broken toenail, and as long as the payouts are good, the developer will get away with it. And, while the RTP for this game is respectable, wins feel infrequent and insufficient to wake you from your slumber. If you tried the game out, please let us know your thoughts below!