Arr, me hearties! You’re now a pirate in China’s most fearsome crew. With you is a collection of miscreants on the hunt for treasure in this strange slot game from developer, Scientific Games. Let the wind billow in your crimson sails and survey your crew – will this pack of scoundrels be your friends and support you on your adventure, or are they really foes? Find out in our free demo game below.

If the seas have been kind to you, you can also play for real money at Casumo Casino, the top casino for April 2021. 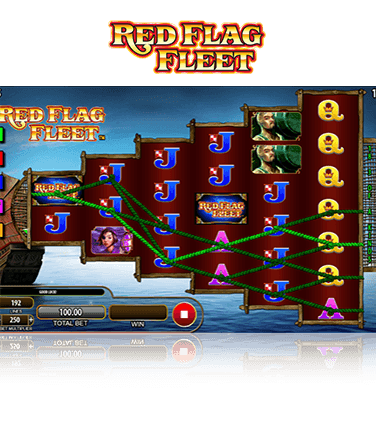 Real Money Casinos Where You Can Play Red Flag Fleet

The Red Flag Fleet slot game from Scientific Games is based on the true story of China’s most famous pirate, Ching Shih. Ching Shih and her armada of over 300 sailing ships called ‘junks’ dominated the China Sea in the 19th century, collecting booty and terrorizing the government. Be transported back in time and join her crew in this video slot featuring 7 reels, 6 rows and a massive 192 paylines. You can hear the gloomy creak of your trusty vessel with its signature crimson sails as it bobs in the calm waters, waiting for your orders to sink or spin. The symbols in the slot depict fictional members of Ching Shih’s crew and matching three or more identical faces will shower you with riches. A match that includes the Wild symbol – a very unoriginal use of the game’s logo – will cause said logo to burst into orange flames as a knotted rope outlines which of the ridiculous number of paylines were winners. It’s easier to control the seas when travelling together, so finding three or more vessels scattered across the grid will reward you with a set of up to 40 free spins. The previously-dull soundtrack picks up the pace here as the triangular reels flip, doing away with the poetic piping of Chinese flutes and replacing it with pounding drums and a jangling xylophone. It’s thematically on point, but realistically unpleasant to listen to. Either two or three reels will randomly change to Wild symbols on every free spin, dramatically increasing your chances of winning in the free spins. The art of the symbols themselves is intriguing overall, but the omnipresent inclusion of the video slot staple playing card symbols is completely wrong for the piratical theme.

Ching Shih was one of the most badass women in history, but this slot doesn’t do her justice at all. The seven rows of Red Flag Fleet take ages to settle into place and the pleasure of finding winning combinations is dimmed by how drawn out the animations are when highlighting the victorious paylines. There are no special features or bonus games, but the return to player (RTP) percentage is at least acceptable at 96.04%. Do you disagree with our analysis? Tell us in the comments below.