Spartacus Call to Arms Slot: Are You Not Entertained?

Have you ever dreamt of fighting one on one with a brave warrior, or trying to outmanoeuvre a deadly lion, but not had the opportunity? Well, today is your lucky day! Scientific Games bring the thrills and glories of Ancient Rome’s gladiators to you. With all the excitement, and none of the risk, you can try out the game for free below.

You can play for real money at BGO, the top casino for April 2021. 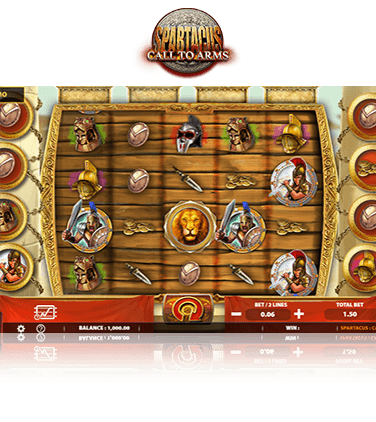 Real Money Casinos Where You Can Play Spartacus Call to Arms

Ok. We will just come out and say it. This game has some massive problems. We think the developers must have been fiddling while the whole project burned, because the quality checks obviously weren’t very good. The gameplay itself is pretty solid, which obviously is a huge positive. The actual finish of the game is poor though. The lion on the start-up screen looks like a botched taxidermy. The symbols and design of the reel set look amateurish at best. And the music is just a poor-man’s version of the Age of Empires theme. There’s no doubt that the emperor would be giving Spartacus Call to Arms the thumbs down. Having said this, if the look of a game is not important to you, then you should give it a go. As with most video slots from Scientific Games, the RTP is high, at over 96%. There are also 50 paylines, which is generous for a 5×4 setup. An unusual feature of the game is the special reel set. If a wild symbol lands on the special set, then it will burst down upon the normal reels, landing in flames on a random spot. While it adds some drama to the otherwise dismal screen, it really adds very little to the game, as this result is much the same as a traditional wild symbol on any other reel. So on reflection, this game isn’t going to inspire anyone to declare “I am Spartacus!”.

For a major game producer like Scientific Games, the quality of Spartacus Call to Arms just isn’t up to scratch. There is little wrong with the actual gameplay, but there also isn’t anything particularly awe-inspiring. The main problem though is the cheapness of the visuals and music. For a game inspired by Rome and the brutality, glory, honour, and excitement of gladiatorial combat, this is more like the Colosseum today: a hollow ruin. It has as little charisma as Gerard Butler’s face, and there’s not even his abs to make up for it! Do you agree with us? Let us know your thoughts in the comments below.