Welcome to Mount Olympus, where the king of the Gods, the Lord of the sky and rain, has bestowed upon you the chance to spin some seismic slots for bodacious benefits. An epic number of reels lay in wait. Cast your eyes to the demo version below.

Indulge in real money play over at 888casino, a casino the gods would approve of for September 2021. 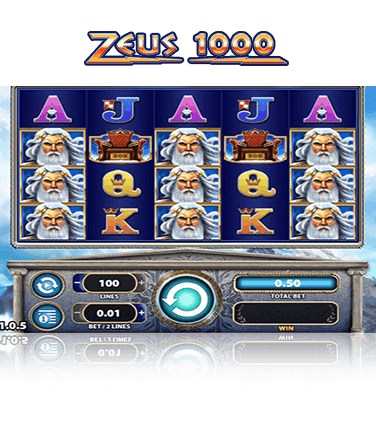 Real Money Casinos Where You Can Play Zeus 1000

Zeus 1000 has two reel sets. The Colossal reel set on the right-hand side facilitates some monstrous money-making opportunities. If you get four wild symbols on the main reel set, it transfers to the corresponding column on the Colossal reels, meaning you have plenty more wilds in play. The bonus symbol is a clenched fist with lightning surging through it, and this brilliant bolt bags you the much sought-after free spins when it appears three to six times on the reels. Six of them yields 30 free spins and 25x your total bet, and the minimum is 10 free spins and 2x your total bet. During free spins, an alternate reel set is used, which has identical winning combinations as before, but the bonus isn’t available. If you get four stacked Zeus symbols on the first reel of the main reel set, they turn into Zeus. Add, which adds between 400 and 1000 Zeus Add symbols for that spin. Thunder rains down from the heavens and your pulse starts to race while your fate is decided, and it rarely ends in tears during free spins. It’s an exciting part of the game, and the visuals and graphics are suitably epic.

All Symbols and Payouts (total bet value of 50)

Video Preview: Have a Gander

There is also an older version of Zeus 1000 called Zeus. You can read the review here. The game is essentially the same as this one. Of course, some rules are different; the number of paylines, the maximum number of free spins, and so on. The non-1000 version of Zeus also doesn’t feature the extra reels and rows that this one has.

Zeus 1000 is one of the best games we’ve reviewed from Scientific Games. This developer’s titles tend to lack in bonus features, but they often make up for it with entertaining and lucrative free spins rounds. This game has some enthralling animations and sound effects, with free spins paydays to rival most slots on the market. The return to player rate is competitive and the theme, while far from unique, is absorbing and engaging. The dual reel setup can also no longer be considered original, but here it is used to good effect to unleash a timely torrent of elation, and keep you coming back for more. If you tried the game out, we’d be happy to hear what you think about it below.