This is a five-reel video slot based on a popular land-based game. As with many titles developed by Scientific Games, it comes with selectable paylines and widely varying wagers. Why not give our free play demo a shot?

Head over to 888casino to play for real money. It’s arguably the number one casino for July 2021. 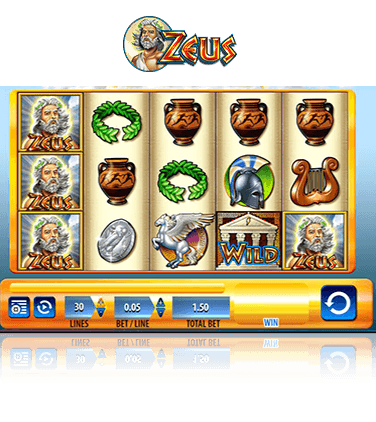 Real Money Casinos Where You Can Play Zeus

As the God of Gods, with his name enshrined immortally as the title to this game, you’d expect Zeus to be the main man here, and that’s certainly the case. He is the highest paying symbol on these godly reels, and the rest of the symbols conjure up visions of the epic ancient Greek myths. Pegasus the unicorn is the next highest payer, followed by the Trojan boat, then a Greek soldier’s helmet, a harp, an opulent vase, gold and silver coins, and a wreath. The wild symbol is a temple, and it’s wild for all symbols except the Feature symbol, which is represented by a thunderbolt emanating from a clenched fist. The bonus feature is triggered when three or more Feature symbols appear on the reels, and this will bring you to a frenetic festival of free spins. Five scattered Feature symbols gets you 100 free spins, and that’s pretty majestic as far as we’re concerned. Four Feature symbols gets you 25 free spins, while three nets you ten. That’s the main gameplay hook here, so keep your eyes peeled for those thunderbolts.

Video Preview: See it in Action!

There is also a newer version of this game called Zeus 1000. The game is basically an updrade on this one. Some rules are different, including the number of paylines, but the biggest difference is a special feature which provides more rows and reels for you to spin. You can read the full Zeus 1000 review here

As Plato once said, the only true wisdom is in knowing you know nothing. So, perhaps it’s unwise of us to suggest we know that this game is alright. It’s a solid effort but it lacks the touch of flair and majesty you might anticipate with a Zeus-themed slot. Those whom the gods wish to destroy they first make mad, and you’ll go positively crazy if you win the mega max win of 250,000 coins. With flexible wagers and selectable paylines, there’s no strict entry requirements to spin these reels up at Mount Olympus, although some of the gods might get a bit finicky if you don’t play wearing a toga and wreath. If you’ve played the game, let us know what you think in the box below!