Branded slots are some of the most fun and entertaining games you can play online. Amongst my favourite licenced slots are those based on TV shows. They boast some of the most exciting and innovative features, as well as centring round well-recognised characters and themes. From current hit TV shows to old-school favourites that evoke the nostalgia of days gone by, there are slots based on a wide variety of TV shows. 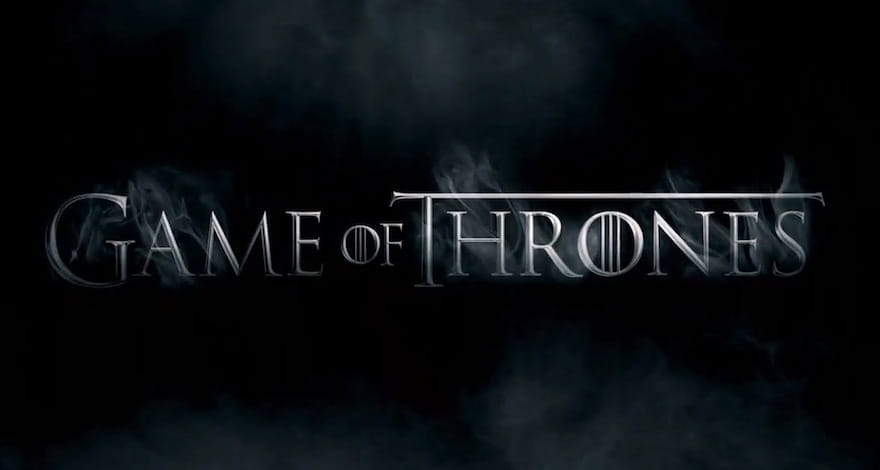 In this article, I will run through the top 10 TV-themed slots. Which will take your fancy? Make sure to follow the links I’ve included to the individual reviews of a game you think you would enjoy playing – there you will be able to find all the info that you need and a free-play demo which we recommend you try before you decide whether or not you want to play for real money.

#10 Who Wants to Be a Millionaire 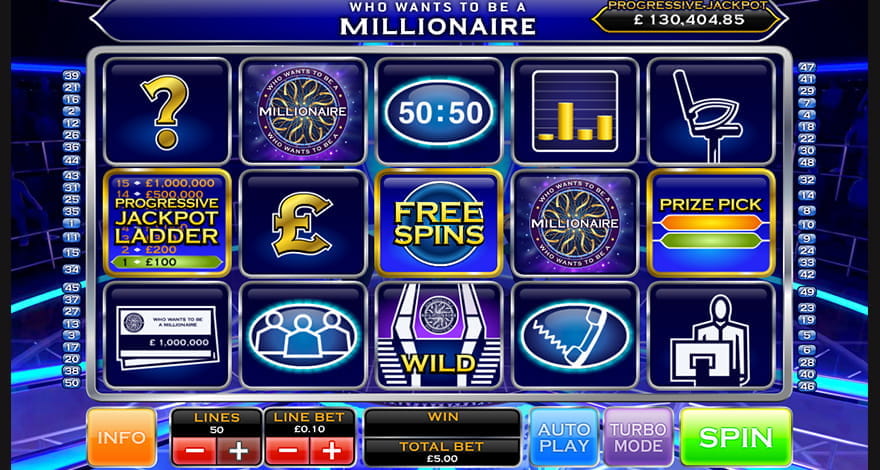 Who Wants to Be a Millionaire was a hugely popular TV quiz show which ran from 1998 – 2014. Presented by Chris Tarrant, thousands of us Brits would tune in to see contestants try their luck at answering general knowledge questions to climb the prize ladder, winning progressively larger sums of money. Given its popularity, it is little surprise that it was adapted into an online slot. The slot has 50 paylines and a variety of exciting features closely linked with the show. The Jackpot Ladder bonus is triggered by 3 or more scatters and you pick answers to move up the jackpot ladder. Mirroring the original show, you can use your lifelines, 50:50, phone a friend or ask the audience to improve your chances of bigger prizes and possibly scooping the progressive jackpot. The game also includes the prize pick bonus in-reel feature as well as free spins with shifting wilds. 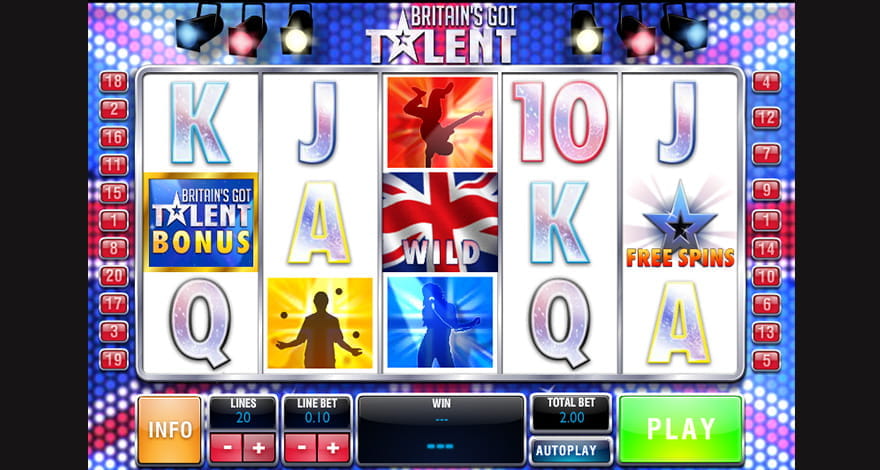 This slot is based on Simon Cowell’s popular TV talent show and the catchy music booms out from the moment you launch the game. Created by the Playtech subsidiary company, Ash Gaming, the Britain’s Got Talent slot has 20 paylines and a range of unique and lucrative features. The highlight of the game is the Live Show Bonus feature. You take your pick from either a dance, musical or novelty act and then spin the wheel to determine which act will represent you in the Live Show bonus. You’ll see video footage of your act performing, and the more applause you get from the audience, the bigger your prize, with up to a massive 1125x your total bet up for grabs. The game also features free spins, where sticky wilds randomly fly onto the reels and stay in place for the duration of the free plays. 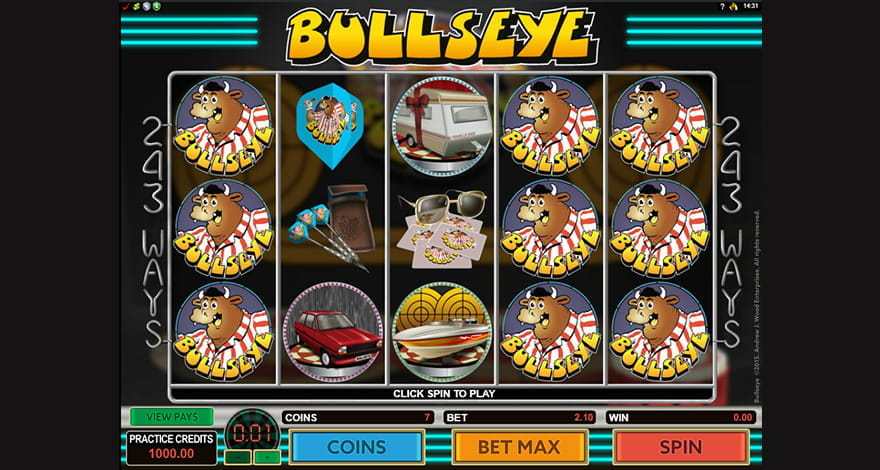 For a true retro experience, you should play the Bullseye slot. Based on the legendary TV darts gameshow, it will take you back to the 80’s. The slot features authentically themed symbols, including top prizes from the show such a speedboat, caravan and a car. You’ll hear Jim Bowen’s commentary as you play, along with the upbeat theme tune. The game has 243 ways to win and includes stacked Bullseye wilds. The Bully’s Prize Board bonus is a real throwback to the show. Throw your 5 darts in the highlighted area of the bonus board to win bonuses of between 2x – 15x your bet. Another highlight of the game is the free spins feature. Get 3 or more scatters and you’ll earn 15 free spins where all wins are doubled. You can’t beat a bit of Bully! 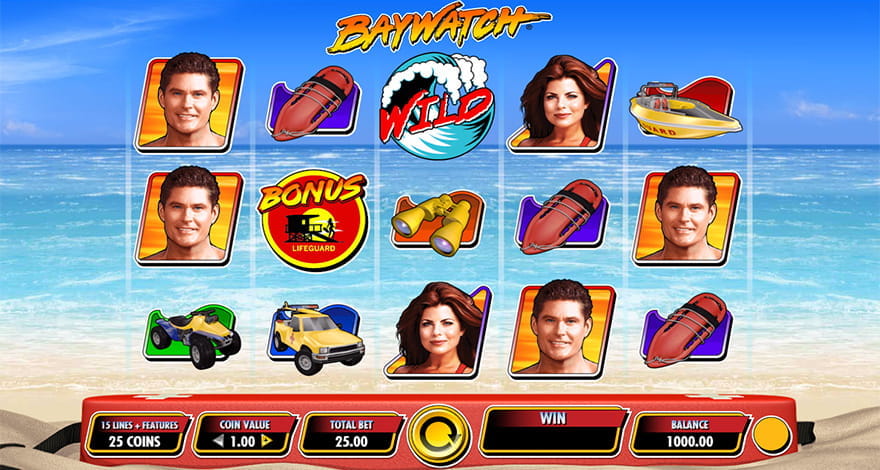 IGT’s Baywatch slot captures the beautiful and buff lifeguards from the iconic 90’s TV show. See Mitch, CJ, Cody and Caroline in action on the beaches of LA. These characters provide the highest paying symbols. Furthermore, the randomly triggered Teamwork feature transforms the lifeguard symbols into 4 different team symbols, with their own set of payouts. The game includes the Tidal Wilds feature, where any wild symbol can expand to cover entire reels as well as expanding horizontally. The free spins bonus has a unique twist. You select one male lifeguard symbol and one female lifeguard to create a team. This team will determine how many free spins you get and which stacked symbols appear on the reels. You’ll hear the timeless Baywatch theme tune as you play the game too, immersing you right into the action. 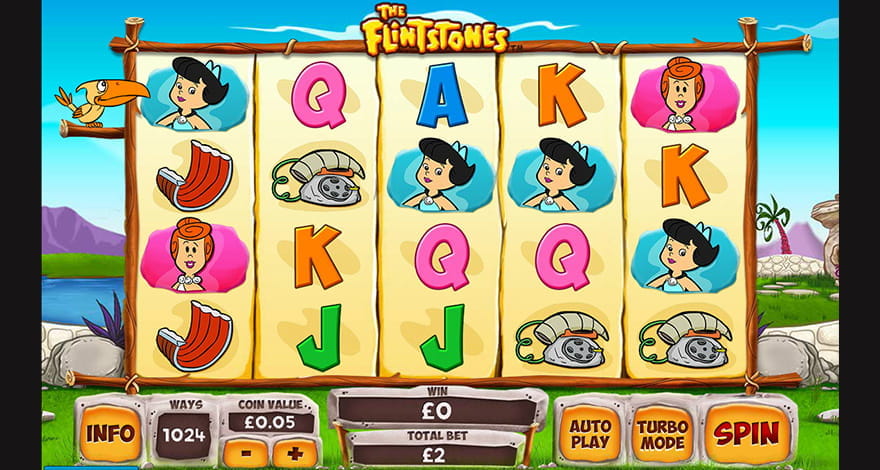 The modern Stone Age family created by Hanna-Barbera have been gracing TV screens since the 1960’s. As well as being a popular, long-running TV cartoon series, The Flintstones has also been turned into several movies. The video slot from Playtech features all the lovable characters, the catchy theme tune and more exciting features than you can shake a stick at. The highest valued symbols, Fred and Barny, along with the Dino wild symbol appear stacked, filling 2 positions on the reels. There are 3 different free game modes with their own unique highlights, including transforming wilds and increasing win multipliers. There is also the Bedrock Bowling bonus and The Flintstones Rocky Ride, ensuring there is never a dull moment when you play The Flintstones slot. 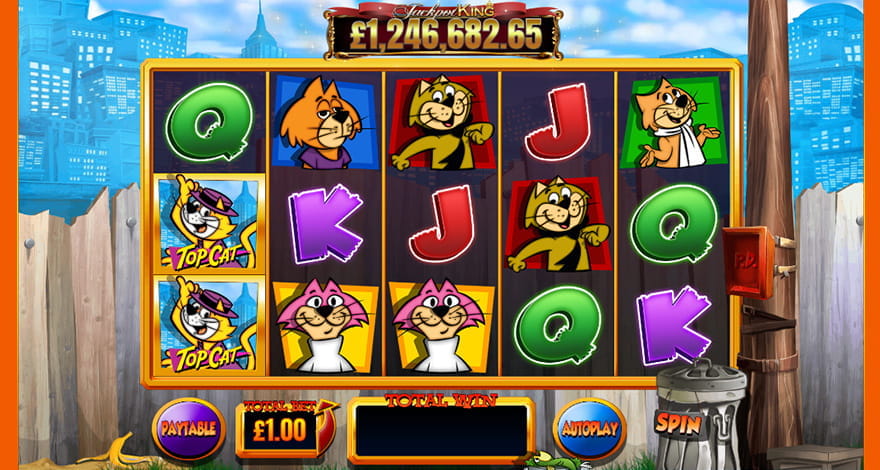 Another popular Hanna-Barbera cartoon series to get an online slot makeover is Top Cat. The 5 reel 3 row video slot has a fixed 20 paylines. The graphics are slick and vividly coloured, giving an ultra-modern feel to the game. Top Cat appears stacked on the reels, helping to create winning opportunities. The entire gang is the bonus symbol, with 3 triggering the Master Plan bonus feature. This bonus has 5 different rounds to pick from, including free spins and pick and win bonuses. There are also 4 base game bonuses; Choo’s Piano Wilds, Benny’s Colossal TV, Brains’ Water Wilds and Spook’s Mice is Nice. Any of these bonuses can be triggered randomly on any spin. This slot is part of Blueprint Gaming’s Jackpot King progressive jackpot series, creating the possibility of landing impressive winnings. 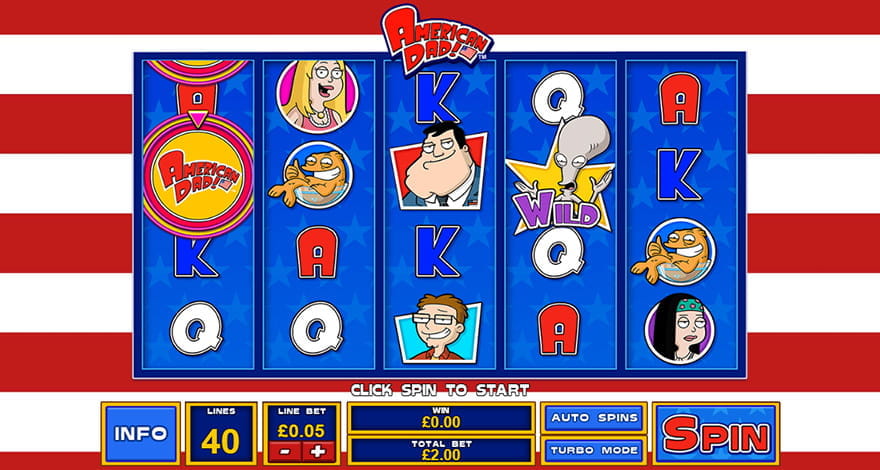 If you fancy playing a cartoon themed slot with a bit more edge, then check out American Dad. The game is based on the animated adult comedy series, created by Seth MacFarlane, Mike Barker and Matt Weitzman. The main characters from the show provide the symbols, as well as some of the special features. The Schmooblydong wheel triggers a re-spin when 2 land on the reels and free spins with 3 symbols. Spin the wheel to determine which character’s feature you will play. Whether you land Stacking Stans, Roger’s Random Wilds, Francine’s Holy Grail, Hayley’s Progressive Multiplier or Wheels and the Legman, you can expect plenty of fun and amusement, as well as the chance to pocket some sizeable wins. 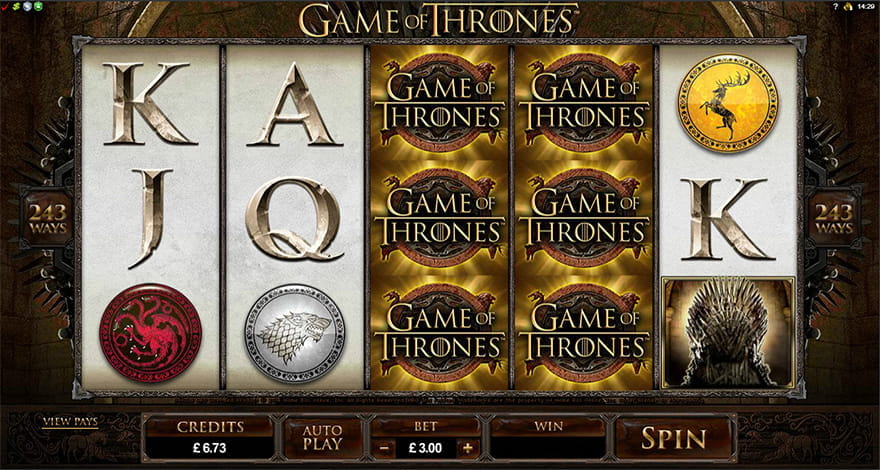 This game is a jewel in the Microgaming slots collection and has proven to be one of the most popular games ever created by the developer. The Game of Thrones TV show is based on the novels of George R. R. Martin and it has a dedicated fan base. The slot captures iconic imagery from the TV show, including symbols such as the Iron Throne and the insignias of the houses of Baratheon, Lannister, Stark and Targaryen. The iconic theme tune plays as you spin the reels. You can play Game of Thrones with 15 paylines or with 243 ways to win. Key features include a customisable free spins bonus. Pick from the 4 houses of Westeros, with each offering a unique free spins and multiplier combination. The game also features a Gamble Trail feature. This gives you the chance to double your wins up to 4 times, with video clips from the show played as you journey through the map locations.

#2 Batman and the Joker Jewels 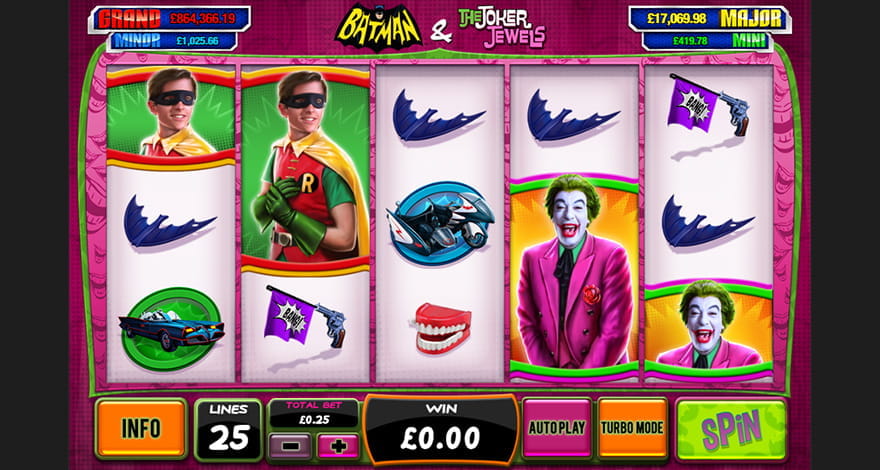 With Adam West as the caped crusader and Burt Ward as Robin, the 1960’s TV show Batman saw the crime-fighting duo protect Gotham City from a range of villains, in true comic book style. Playtech have developed a range of jackpot slots based on the classic TV series. In Batman and the Joker Jewels, we see the caped crusader battling against one of his most dangerous foes, the Joker. The slot boasts slick and colourful graphics that bring the classic show bang up to date, whilst capturing the essence of the original theme. The game includes a rich variety of special features. The Joker random wilds sees up to 9 symbols transformed into substituting wilds on any spin. There is also the Batman vs the Joker free games, where all wins are multiplied by the bat-tastic multiplier meter. The game also includes the DC Super Heroes Jackpot, where you can win one of four progressive jackpot prizes. 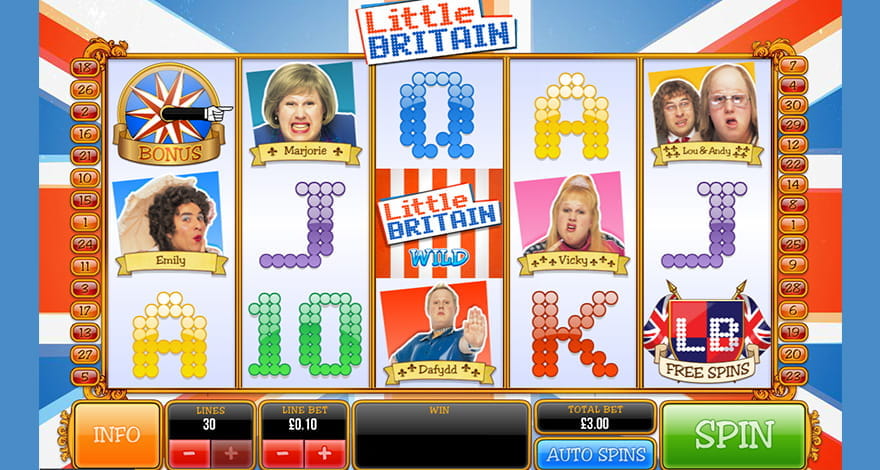 When it comes to TV-themed slots, there are few that come close to rivalling Little Britain in terms of sheer entertainment. Matt Lucas and David Walliams’ hilarious comedy series has been expertly adapted into a video slot, which captures the comedy genius of the show. You’ll see all your favourite characters, and there are also 5 bonuses based on key characters, including Lou & Andy’s Love It bonus, Margorie Dawes’ Fat Fighters bonus, Dafydd’s Big Gay bonus, Emily Howard’s Lady Things bonus and Vicky Pollard’s ASBO bonus. There are also free spins featuring special wild stacked character symbols. To top it all off, Anne’s Wild bonus sees the special lady appear randomly on any spin, where she throws objects at the reels turning symbols wild. With witty commentary from Tom Baker as you play, this slot is a must try for fans of the show.