Growing up, I always believed that Vikings drank mead – it’s what all my books said! But doing a bit of research, turns out that their preferred drink was actually beer. Who knew that slots could be so educational?

You know what’s better than beer, though? 32Red Casino’s offer for October 2020, which you can use to play this slot! 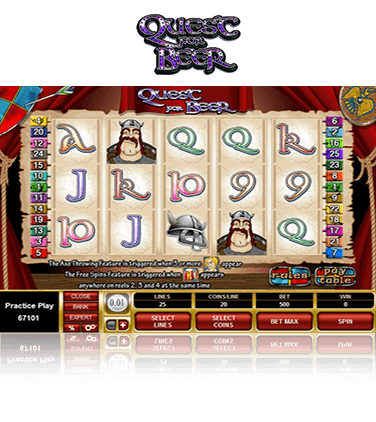 I’ll have to be honest (and frankly, when am I not) – the graphics aren’t THAT great. I mean, don’t get me wrong, they’re not bad, it’s not like they’re an eyesore to look at! But they’re just sort of generic, and I’m sure that if I tell you to imagine Viking symbols for a slot, what you think of will be pretty similar to what you’ll get. The music is just the rings and bleeps that you hear in any other slot that couldn’t afford their own music. But I’m happy to say that while it stumbles a bit in the visual and audio department, the slot more than makes up for it with the gameplay! Everything you might want from a slot is here. A bonus game? We have it! Free spins? Sure, how about 10 with doubled wins? Gamble feature? I don’t see why not! It’s like the developers decided to stick literally every single feature they could think of into this one, single slot, just to see if they could. And I’ll have to be honest, I think they pulled it off. The bonus features like the game and the spins (which are random and require certain symbols in certain spots) aren’t super frequent, but when they happen, it’s an absolute party.

Conclusion – One For The Ages

You wouldn’t expect a slot like “Quest for Beer” to be as good as it is, but there you have it, living proof that sometimes, when people are excited about something, they can make a pretty damn good slot about it… Even if that something is beer. Now, I’m not gonna lie, the slot’s not perfect, but it’s better than most other slots on the market, and the sheer number of bonus features and games that Microgaming managed to stick inside of it is just ridiculous! The slot’s not beautiful, but it plays well and works well. The slot won’t make you rich, but you’ll feel like a champ when the symbols align just right and you score a huge win from one of the bonuses. For some people, this may not be enough, but most of us, I believe, would find plenty to love here!