If you’ve watched the hit Netflix show of the same name, you’ll be excited to play this game. NetEnt have managed to transfer the fast-paced action and 1980s vibe over to this slot machine, and every spin is a fun one, especially if you start a bonus or the free spins feature. Why not spin the reels of this game for free below and see if you’re as impressed by it as we are?

When you’re ready, you can then play this game for real money at a number of recommended casinos, such as Grand Ivy, which is our top casino for January 2021. 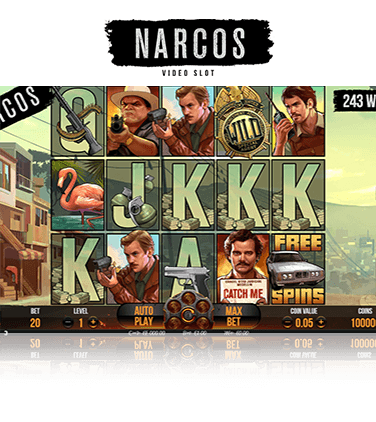 Narcos is an exceptionally easy slot to play, so even novice players will understand the gameplay quickly. Just choose how much to bet and then spin the reels. You could then spin in a prize or start one of the bonuses. Didn’t win anything? No worries – just spin the reels again and see if you get luckier next time!

As well as the Walking Wilds, which is a superb feature, you’ll also find two bonus features – including one where you get to lock Pablo Escobar up. Keep your head down for the Drive-By feature though, which mirrors the danger of Medellín in the 1980s.

There’s also a great free spins feature at this slot, which can allow you to scoop some seriously large prizes. You could find huge numbers of wilds on the reels if you’re lucky, which will hopefully allow you to put a big dent in Pablo’s bank balance.

As you can see, this game has an impressive number of paylines. You’ll win a prize whenever you get identical symbols on three or more consecutive reels, starting from the first reel. If you do spin in a win, you’ll find that your bet is multiplied by the figure shown on the paytable in order to reveal your prize.

This slot offers a really wide range of betting options. £0.20 per spin should be low enough for most players, while those who prefer playing at higher stakes can bet as much as £400 per spin. As with most slots, the more money you bet per spin, the more money you could win. Do not bet more than you can afford to lose though.

The jackpot of 300x is won if you manage to get five symbols representing one of the two heroes across a payline. This means that those playing at the maximum stakes could land a jackpot worth £6,000. This might not seem like much, however you have to remember that it’s possible to get multiple winning combinations on the same spin, especially if a few wilds are scattered over the reels.

The symbol featuring Pablo Escobar has no monetary value, however get three on the same row and you’ll start the Locked Up feature. The free spins symbol also has no monetary value either, however get three of them on reels one, three and five and you’ll start the exciting free spins feature. So, while the Escobar and free spins symbols don’t provide instant wins, you still definitely want them to appear on the reels.

The first bonus feature to mention is the wild symbol, as it’s not like wild symbols at other slots. This is because it doesn’t just appear for a spin then disappear. Instead, when it forms part of a winning combination, it will become a Walking Wild and remain on the reels for the next spin, moving one position to the left. It will remain on the reels until either it falls from the left side or isn’t part of a winning combination.

Next up, there’s a bonus called the Drive-By feature, which can happen after any spin. A car will drive by and shoot at the reels, turning some high value symbols into wild symbols. This feature activates quite regularly, however there’s no guarantee that it will lead to a prize.

If you manage to get three or more Pablo Escobar symbols on the same row, you’ll start the Locked Up feature. This will see the Escobar symbols move together in a cluster and you’ll be awarded a prize worth up to 10x. That’s only the beginning though, as the feature now starts.

You aren’t only able to play Narcos on a desktop, as NetEnt have also ensured that it has been perfectly optimised for mobile play as well. The mobile game is identical to the desktop game in terms of gameplay, meaning it should be easy to make the transition, plus the prizes are also exactly the same too.

To play Narcos using a mobile, just type your casino’s URL into your mobile browser, before signing in using your existing details. If you aren’t already a member, you’ll be able to register using your mobile. Then just load the game in your browser and start playing. Alternatively, you can download an app, if your casino offers one.

The RTP of this game is 96.23%, which is impressive. This means that over time, the game will pay out £96.23 for every £100 spent on it. Of course, this is only an average though, so some will win huge amounts, while others will not win anything at all.

As with nearly all slot machines, there is no way to increase your chances of winning when playing Narcos. Instead, just enjoy playing and accept that the game is a completely random one.

Narcos is an exceptionally good slot, especially if you’ve seen the TV series. There are many reasons why you should play it, however the fact that there are so many exciting bonuses is the biggest. We particularly like the Walking Wilds, which can contribute to multiple winning combinations. The Locked Up feature is also very enjoyable, plus the free spins can lead to big prizes. Don’t worry if you want to play while you’re away from home either, as this slot can be played using any modern mobile device.

Every fan of online slots should appreciate this hugely enjoyable game, so why not have a few spins of the reels today? You can then come back here and use the comments section to let us know what you think!

up to £1,500 + 100 Spins on StarburstOur casino suggestion for Narcos
Overall Rating 9.7/10.0 Play here!
Full T&Cs apply. 18+. New players only. One bonus offer per player. Minimum deposit £20, max bonus bet is £5, bonus spins on selected games only and must be used within 72 hours. Bonus funds must be used within 30 days otherwise any unused bonus shall be removed. Bonus funds are 100% match up to £300 on your 1st deposit, 25% match up to £800 on your 2nd deposit, and 50% match up to £400 on your 3rd deposit. Bonus funds are separate to cash funds and are subject to 35x wagering the total bonus, cash & bonus spins. www.begambleaware.org.
NetEntAll 188 NetEnt slots at a glance
Popular Blog Posts
ELK StudiosAll 20 ELK Studios slots at a glance
Scientific GamesAll 35 Scientific Games slots at a glance
Home > Netent > Narcos